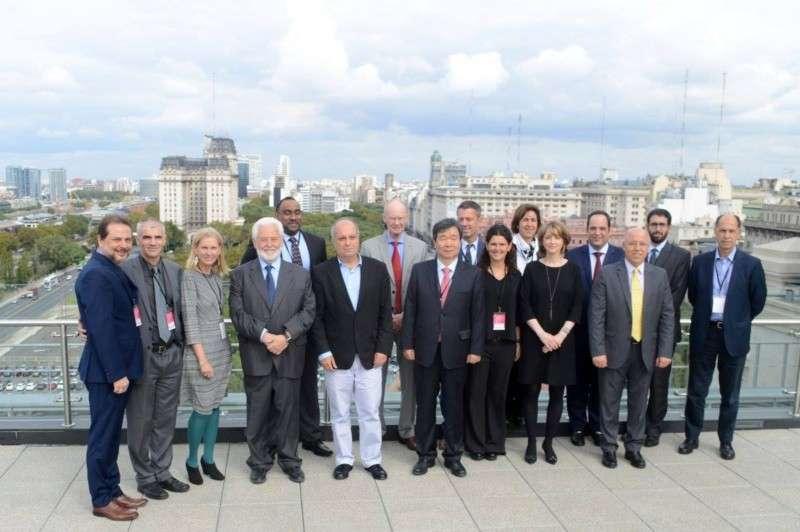 Members of the Enquiry Mission arrived in Buenos Aires on Monday, April 17 for a four-day visit during which they met with political leaders, learnt more about the Expo project, and exchanged with key figures involved in the proposed theme of the Expo, “Science, Innovation, Art and Creativity for Human Development. Creative industries in Digital Convergence.”Reiterating national support for the Expo bid, the President of Argentina, Mauricio Macri, met with members of the Enquiry Mission. The delegation also held meetings with other with senior political figures including the Minister of Foreign Relations and Worship, Susana Malcorra, the Minister of Tourism, Gustavo Santos, and the Minister of Public Media and Contents System, Hernán Lombardi. On Wednesday, 19 April, members of the Enquiry Mission visited the Argentine National Congress, where they exchanged on the bid project with Vice President Gabriela Michetti and the Provisional President of the Chamber of Senators, Federico Pinedo.The BIE delegation also met with local politicians to discuss the bid project, including the Mayor of Buenos Aires Autonomous City, Horacio Rodríguez Larreta, and the Mayor of Vicente López, Jorge Macri. The delegation carried out a visit to Tecnópolis Park, on the proposed site of the Expo in the district of Vicente López. This visit was an opportunity for the Enquiry Mission to learn more about the Master Plan and plans for the post-Expo period, as outlined in the bid project.

As Buenos Aires forecasts 9.4 million visits to the Expo, Andy Freire, the Minister of Modernisation and the President of the Bureau for Buenos Aires Tourism City, gave details of the host city’s capacity to organise an Expo. The BIE delegation also exchanged with representatives of the tourism sector regarding the potential for development in the region should Argentina’s bid be successful.

Members of the Enquiry Mission also met with the National Secretary of Content, Gabriela Ricardes, who developed on the proposed theme of the Expo. The relevance of the theme to Argentina and to the international community at large was further discussed in a meeting with representatives of the media, technology and digital industries, and during a Round Table discussion with the participation of several National Ministries.

Commenting on the visit to Buenos Aires, the Secretary General of the BIE, Vicente G. Loscertales, stated that “the Enquiry Mission has been able to gain a deeper understanding of Argentina’s Expo plans and appreciate the broad support for the project which, if successful, would be the first Expo to be organised in Latin America.”

Joe Kleimanhttp://wwww.themedreality.com
Raised in San Diego on theme parks, zoos, and IMAX films, InPark's Senior Correspondent Joe Kleiman would expand his childhood loves into two decades as a projectionist and theater director within the giant screen industry. In addition to his work in commercial and museum operations, Joe has volunteered his time to animal husbandry at leading facilities in California and Texas and has played a leading management role for a number of performing arts companies. Joe previously served as News Editor and has remained a contributing author to InPark Magazine since 2011. HIs writing has also appeared in Sound & Communications, LF Examiner, Jim Hill Media, The Planetarian, Behind the Thrills, and MiceChat His blog, ThemedReality.com takes an unconventional look at the attractions industry. Follow on twitter @ThemesRenewed Joe lives in Sacramento, California with his wife, dog, and a ghost.
Share
Facebook
Twitter
Linkedin
Email
Print
WhatsApp
Pinterest
ReddIt
Tumblr
Previous articleNUSSLI Completes Main Structure of China Pavilion, Continues Work on Five Pavilions at EXPO Astana 2017
Next articleŁódź Prepares Bid for Expo 2022