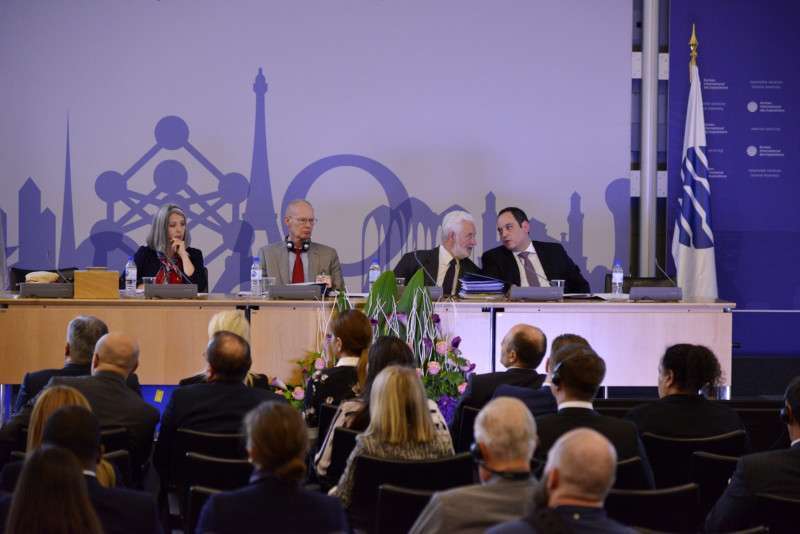 The Bureau International des Expositions (BIE) held its 163rd General Assembly in Paris on June 12-13, 2018. Delegates representing the 170 Member States of the BIE attended the meeting, which featured reports by organizers of upcoming Expos, as well as presentations by the candidates seeking to organize World Expo 2025.

The first day of the meeting included reports by the Presidents of the Administration and Budget Committee, the Executive Committee, the Rules Committee, and by the Vice-President of the Information and Communication Committee. Member States gave their approval to the recommendations of the Executive Committee, which considered all three World Expo 2025 projects to be viable and in line with BIE regulations, and approved the adoption of special regulations relating to World Expo 2020 Dubai. The General Assembly also approved the recognition of the 22nd edition of the Triennale di Milano.

On the second day of the General Assembly, Member States were given an update or progress on the next World Expo, which will take place in Dubai in 2020, by Najeeb Mohammed Al-Ali, Executive Director of Expo 2020 Dubai Bureau. Mr. Al-Ali gave delegates an overview of the significant progress of construction work on the site, and announced that 170 countries have now confirmed participation, with the first ones already starting work on their allocated plots.

Following the election of Argentina as host country of Specialized Expo 2023 at the previous General Assembly, Gabriela Ricardes of the Ministry of Public Media and Contents System of Argentina presented Member States with a progress report. Significant foundation work is being made on developing the Expo site and in engaging international participants, explained Ms Ricardes, who announced that Argentina will submit its recognition dossier for Expo 2023 Buenos Aires in early 2019.

Delegates were also presented with an overview of the planning of Horticultural Expo 2019 Beijing, which will open to the public in less than a year. With Expo 2019’s first International Participants’ Meeting taking place later in June, the Deputy Secretary of the Executive Committee of Expo 2019, Peng Hongming, informed Member States that 80 countries and 17 international organisations have formally confirmed their participation. Ms Peng also gave an overview of the Expo’s communications activities as well as progress made on the site, where major pavilions are at an advanced stage of construction.

The General Assembly also heard about preparations for the following Horticultural Expo, Floriade Expo 2022 Amsterdam-Almere, which was formally recognized during the previous session. Cindy Heijdra, Agricultural Counselled at the Embassy of the Netherlands in Paris, and Sven Stimac, Senior Advisor for Floriade Expo 2022, informed delegates that work has started on the Expo site, and that invitations are being prepared for international participants, Dutch cities and provinces, as well as NGOs and companies.

The General Assembly granted formal recognition to the 22nd edition of the Triennale di Milano, which will take place between 1 March and 1 September 2019 under the theme “Broken Nature: Design Takes on Human Survival.” To mark this occasion, the Managing Director of the Triennale, Carlo Morfini received the BIE flag in the presence of Paola Antonelli, Curator of the 22nd Triennale.

Joe Kleimanhttp://wwww.themedreality.com
Raised in San Diego on theme parks, zoos, and IMAX films, InPark's Senior Correspondent Joe Kleiman would expand his childhood loves into two decades as a projectionist and theater director within the giant screen industry. In addition to his work in commercial and museum operations, Joe has volunteered his time to animal husbandry at leading facilities in California and Texas and has played a leading management role for a number of performing arts companies. Joe previously served as News Editor and has remained a contributing author to InPark Magazine since 2011. HIs writing has also appeared in Sound & Communications, LF Examiner, Jim Hill Media, The Planetarian, Behind the Thrills, and MiceChat His blog, ThemedReality.com takes an unconventional look at the attractions industry. Follow on twitter @ThemesRenewed Joe lives in Sacramento, California with his wife, dog, and a ghost.
Share
Facebook
Twitter
Linkedin
Email
Print
WhatsApp
Pinterest
ReddIt
Tumblr
Previous article
43,000 attend InfoComm 2018
Next article
IAAPA selects Eleventh Hour to assist with CEO search