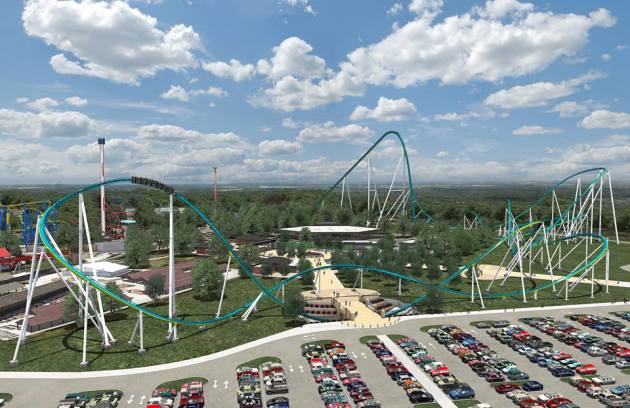 Charlotte, NC, USA /PRNewswire/ — Carowinds construction crews on Thursday December 4 installed the final piece of the 325-foot lift hill on the new Fury 325 – the world’s tallest and fastest giga coaster. After finishing work on the hill, which stands 20-feet taller than the Statue of Liberty, construction workers placed a Christmas tree at the peak, with the biggest holiday present for the Carolinas underneath.

“When Fury 325 opens this spring, Carowinds will have two of the 10 tallest rollercoasters in North America and we’ll have a total of 14 roller coasters, which is something that only several parks in the world can top,” says Mike Fehnel, Carowinds’ vice president and general manager. “The only thing as thrilling as the rides is the amazing construction story that’s currently unfolding.”

Riders will begin an ascent that takes a terrifying 63 seconds to climb, then plunge down an 81-degree drop, reaching speeds of up to 95 mph as they race through a series of hills, curves and quick transitions. All told, it will take each of the three, 32-passenger open air trains nearly 3 minutes and 25 seconds to complete the 6,602-foot ride.

The new ride will be visible from uptown Charlotte, renewing the park’s skyline along Interstate 77 and serving as a symbol of changes to come. Fury 325 is part of a planned $50 million multiyear investment to bring new life to founder Pat Hall’s original vision for Carowinds. The park is being revamped from top to bottom to celebrate Carolina culture, including new rides, attractions and food from different regions. Fury 325 will be the centerpiece of a new, 8.2-acre main entrance plaza that includes more than 900 parking spaces closer to the gate, upgrades to improve traffic flow and expanded guest service facilities.

As Carowinds construction crews build Fury 325, the park announced a second new ride Wednesday called the SlingShot. It will also debut in the Spring of 2015. 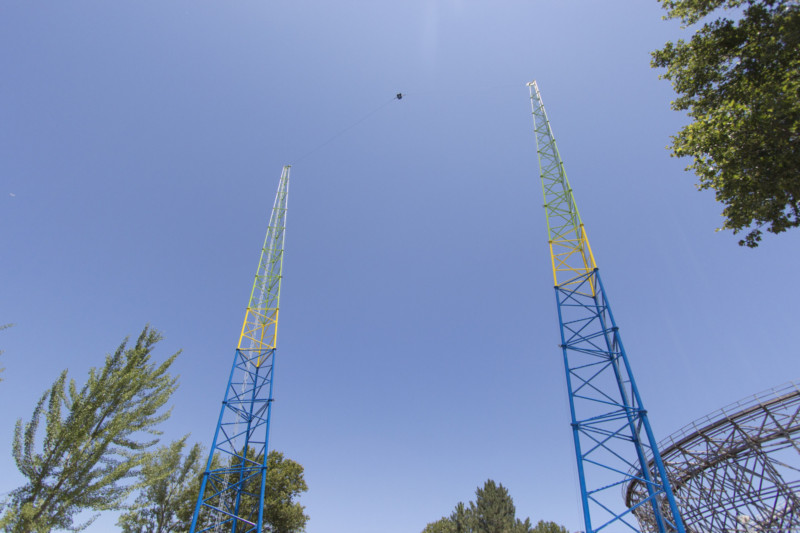 A pair of cables will catapult the two-person capsule nearly 300-feet into the air – nearly as high as the Statue of Liberty – at speeds up to 60 mph. After some brief weightlessness, riders will zoom back toward the ground, often rotating head-over-heels and bouncing up and down until they come to rest at the launch point.

The ride will be an additional charge attraction; costs are being determined. SlingShot marks the second new ride at Carowinds for 2015.

“Carowinds will be a destination for thrill-seekers,” says Mike Fehnel, Carowinds’ vice president and general manager. “We’ll have two of the 10 tallest rollercoasters in North America, a total of 14 roller coasters – which is something that only three parks worldwide can top – and now we’ll have two new ways for riders to scream with joy at roughly 300 feet in the air.”

Like Fury 325, the SlingShot will be visible from uptown Charlotte.

Joe Kleimanhttp://wwww.themedreality.com
Raised in San Diego on theme parks, zoos, and IMAX films, InPark's Senior Correspondent Joe Kleiman would expand his childhood loves into two decades as a projectionist and theater director within the giant screen industry. In addition to his work in commercial and museum operations, Joe has volunteered his time to animal husbandry at leading facilities in California and Texas and has played a leading management role for a number of performing arts companies. Joe previously served as News Editor and has remained a contributing author to InPark Magazine since 2011. HIs writing has also appeared in Sound & Communications, LF Examiner, Jim Hill Media, The Planetarian, Behind the Thrills, and MiceChat His blog, ThemedReality.com takes an unconventional look at the attractions industry. Follow on twitter @ThemesRenewed Joe lives in Sacramento, California with his wife, dog, and a ghost.
Share
Facebook
Twitter
Linkedin
Email
Print
WhatsApp
Pinterest
ReddIt
Tumblr
Previous articleNational Geographic to Distribute “Living in the Age of Airplanes”
Next articleTwo London Installations by Video Artist Bill Viola Brought to Life by 7thSense Design Media Servers