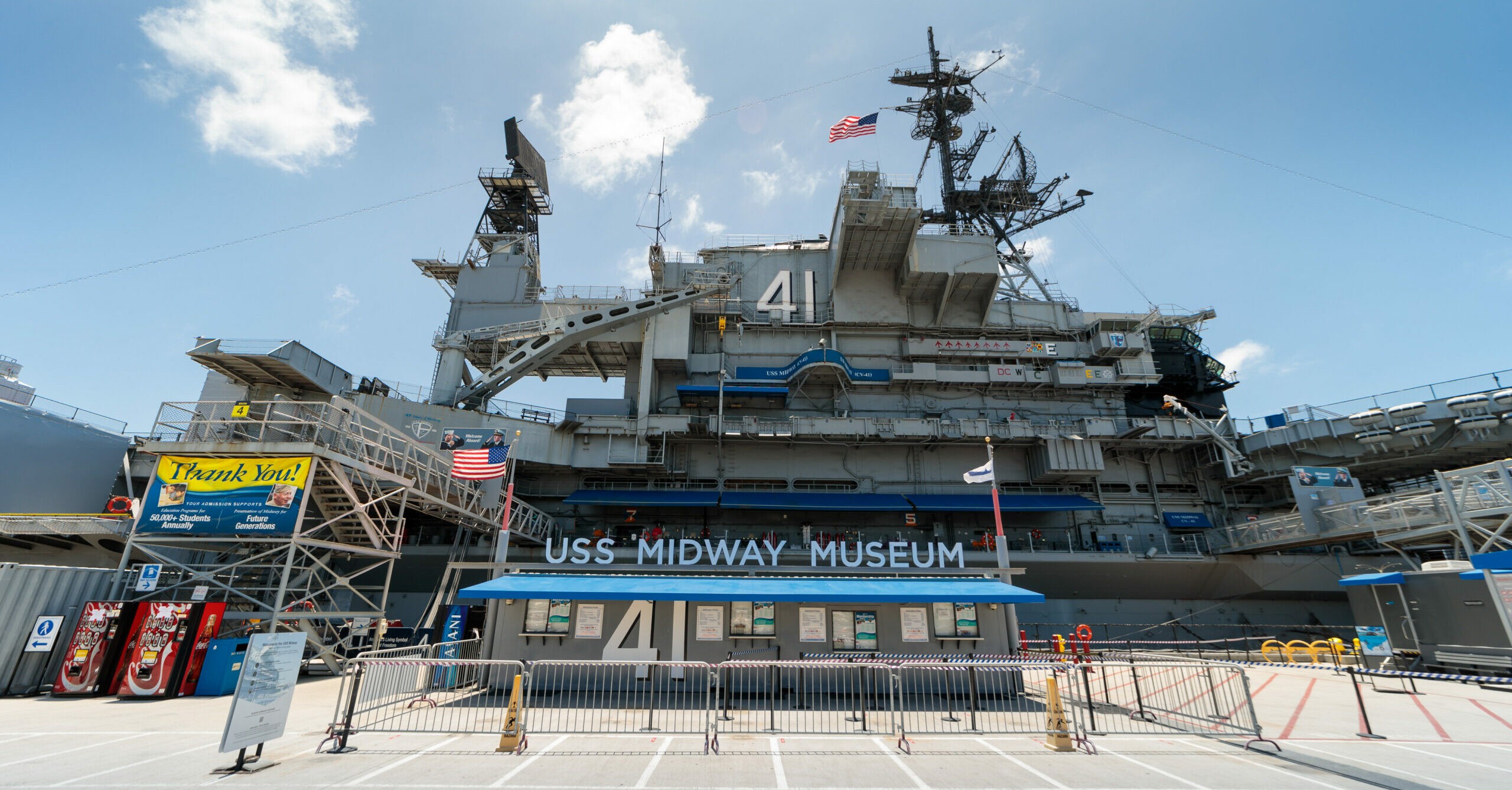 The USS Midway was the longest-serving aircraft carrier of the 20th century. Named after the June 1942 Battle of Midway, the naval ship was built in just 17 months but missed World War II by one week when commissioned on September 10, 1945. Midway was the first in a three-ship class of large carriers that featured an armored flight deck and a powerful air group of 120 planes.

The Midway has played critical roles in such conflicts as the Cold War, Korea, Vietnam, and the Persian Gulf. In Operation Desert Storm, Midway served as the flagship for naval air forces in the Gulf and launched more than 3,000 combat missions with no losses. Its final duty was evacuating civilian personnel from Clark Air Force Base in the Philippines after the 20th century’s largest eruption of nearby Mount Pinatubo.

In 1992, the Midway was decommissioned. It was donated to the non-profit San Diego Aircraft Carrier Museum organization, who opened it as the USS Midway Museum in June 2004. As the area’s #1 tourist attraction, it welcomes nearly 1.5 million visitors annually, but with 2020 public gathering restrictions by the coronavirus pandemic, the Midway closed to the public, and video tours were made available on the museum website.

Joe Gursky has been the Director of IT for the USS Midway Museum since 2013. He previously designed and supported internal IT networks and security systems, including video – an experience that provided many technology insights to leverage for the Midway team. He had clear ideas in mind on how to best approach the museum’s unique monitoring needs.

“Simply stated, we’re a small company that wants to do big things. We don’t have a huge budget, so we need to be very efficient and effective in everything we do,” said Gursky. “Like many public attractions, our video surveillance system is primarily about protection for our guests, so we need high-quality video, good coverage, and a lot of long-term storage.”

From the beginning, Gursky and his team spearheaded the project internally, with support from San Diego-based integrator and installing partner, Layer3 Security Services. The team knew they needed a leading-edge installation, so XProtect open platform video management software (VMS) from Milestone Systems was the logical choice. San Diego-based National Security Works (NSW) has helped the museum maximize its effectiveness.

“Dario Santana from Layer3 has been great to work with. In the first phase of our project, Dario did a fabulous job of VMS design and set up, as well as fabricating and installing a large set of custom camera mounts that we needed — we don’t have a lot of flat walls and surfaces to work with on the ship,” added Gursky. “And the folks at NSW have been very helpful with some advanced, enterprise-level assistance that we needed. Add Milestone Systems to that list, and the entire team has been top-notch.”

Gursky explained that over the years, as with other attractions, liability has become a growing concern. Longer-term video retention has been vital in debunking false claims or establishing liability in the event of an incident. And due to the high quality of their surveillance system, when an accident does occur, the team is notified immediately, and medical assistance is deployed.

“Our system back in 2015 had about 40 cameras built on exacqVision, but we started adding cameras and outgrowing that VMS. About two years ago, we migrated to Milestone XProtect software,” said Gursky. “We now have over 100 high-resolution cameras and still growing. The open platform has been great: we can try different solution approaches, especially when it comes to servers and storage.”

Currently, the Midway museum has a mix of high-quality, IP-network cameras from Axis Communications, BOSCH, Hanwha Techwin, and VIVOTEK. Most cameras in use are four-stream, multi-imager cameras that provide 360° coverage of the museum with a minimum of cameras, including the main decks, hanger bays and other expansive areas.

“One issue I’m adamant about is that we don’t want any cameras with less than a three-megapixel imager,” said Gursky. “Any video we capture needs to be viewable and usable. We are about forensic use, so we need good quality, recorded video to zoom into and see the details. This is what makes the video evidence useful in post-incident investigations.”

The team has installed long-range, 12-megapixel cameras from BOSCH on the flight deck, for extended coverage. The zoom capabilities of these cameras cover museum spaces from a distance and achieve an optimum viewing angle.

“We installed a high-resolution, 360° AXIS camera above the parking garage, and four Techwin cameras inside it for a full view of the entire facility’s activity,” said Gursky. “We run the video back to the ship’s Milestone VMS with a Ubiquiti wireless point-to-point connection that we put in, which is pretty cool.”

Gursky explained that their high-quality image and long-term archiving demands necessitated creative storage options. The non-profit museum cannot afford the considerable expense of traditional storage systems, but it could not afford to have sub-quality video or short-term storage. Camera outputs are recorded based on customized needs and video motion detection. While plans are in development for a new Security Operations Center with a full-time staff, the current forensic use requires reliable, affordable, high-quality video retention.

“We basically have an off-the-shelf Dell MD1280 system with 84, 5-terabyte drives,” said Gursky. “After 60 days, we’re willing to go down to 10 frames per second from 20, to maximize our storage. We’re still tweaking our parameters and trying new approaches, but according to our calculations, we expect to get close to about 24-months of archived video, depending on compression and other factors.”

The cameras run into the Milestone recording server with 30 terabytes of local SSD storage. The first 20 terabytes are on a RAID 5 configuration, running the initial storage. This way, whatever needs to be viewed is immediately available; there is no storage lag and no disc lag. Later, the system moves the video data over to four levels in an EMC storage array, porting the data across all four levels within the same storage architecture.

“I’m very happy with the way the Milestone VMS has worked. We’ve thrown a lot of weird things at it and made it crunch a lot of data,” said Gursky. “We changed our initial storage configuration a couple of times, then let the system move all that data around — we had no issues. The Milestone VMS has been doing a great job for us, and it will certainly be a key factor as we continue to fine-tune and expand our system.”

Joe Kleimanhttp://wwww.themedreality.com
Raised in San Diego on theme parks, zoos, and IMAX films, InPark's Senior Correspondent Joe Kleiman would expand his childhood loves into two decades as a projectionist and theater director within the giant screen industry. In addition to his work in commercial and museum operations, Joe has volunteered his time to animal husbandry at leading facilities in California and Texas and has played a leading management role for a number of performing arts companies. Joe previously served as News Editor and has remained a contributing author to InPark Magazine since 2011. HIs writing has also appeared in Sound & Communications, LF Examiner, Jim Hill Media, The Planetarian, Behind the Thrills, and MiceChat His blog, ThemedReality.com takes an unconventional look at the attractions industry. Follow on twitter @ThemesRenewed Joe lives in Sacramento, California with his wife, dog, and a ghost.
Share
Facebook
Twitter
Linkedin
Email
Print
WhatsApp
Pinterest
ReddIt
Tumblr
Previous article
AOA seeking staff for variety of creative and technical positions
Next article
Experience UK merges with ALES UK