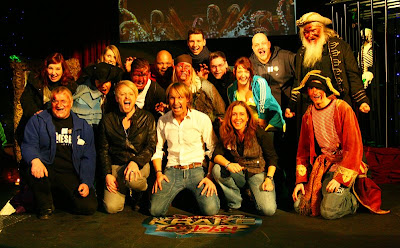 Soltau, Germany (March 8, 2012) Heide Park Resort cast suitable live actors to reside in the new multi-dimensional haunt KRAKE!  About 30 people dared the adventure and presented their skills in front of the jury, including TV star Ross Antony. 13 participants were convincing and will come from 31 March to work the scariest job in Germany.Screaming a the top of their lungs, while a decimeter measured the achieved volume, and achieving other tasks, for the jury that included TV star Ross Antony, Hit-Radio Antenne presenter Denise Hair Trick Rump and Heide Park Entertainment Manager Ingo Reichstein, the job candidates went through their paces.

“We have deliberately chosen tasks with which we can determine whether the applicants can also maintain physical or mental stress and a cool head,” Ingo Reichstein revealed the strategy of the jury. The terms of the potential workplace are particularly unusual: A dark, noisy and smelly place that will challenge the players to exhaustion. But despite the difficult circumstances, Ross Antony is certain: “‘This job ‘shocks’!”To work with real visitors, the cast also has to have stamina, talent for improvisation and embody the passion of a character. “The ideal candidate must not only have fun at the horror and even be his most fearless, but to identify with him in an assigned role,” adds Reichstein. A pirate costume and set design from old barrels and skeletons will help in the development of the 30 participants in their acting talent. An original text from the haunt had to be memorized in advance at home and continued at any point. Whoever had this particular skill was allowed to interact with Ross Antony.

At the end of a long day, those who won one of the five haunt roles had every reason to celebrate: In addition to unique special effects, they will work with their frightening colleagues starting in late March, scaring adventurers’ last nerves by sending them together through a chase a shattered wreck, the KRAKE  sending them to the depths.

Joe Kleimanhttp://wwww.themedreality.com
Raised in San Diego on theme parks, zoos, and IMAX films, InPark's Senior Correspondent Joe Kleiman would expand his childhood loves into two decades as a projectionist and theater director within the giant screen industry. In addition to his work in commercial and museum operations, Joe has volunteered his time to animal husbandry at leading facilities in California and Texas and has played a leading management role for a number of performing arts companies. Joe previously served as News Editor and has remained a contributing author to InPark Magazine since 2011. HIs writing has also appeared in Sound & Communications, LF Examiner, Jim Hill Media, The Planetarian, Behind the Thrills, and MiceChat His blog, ThemedReality.com takes an unconventional look at the attractions industry. Follow on twitter @ThemesRenewed Joe lives in Sacramento, California with his wife, dog, and a ghost.
Share
Facebook
Twitter
Linkedin
Email
Print
WhatsApp
Pinterest
ReddIt
Tumblr
Previous articleFormer Newseum Head Joe Urschel to Lead New National Law Enforcement Museum
Next articleDisney Parks and Resorts’ Alan Bruun and Tom Zofrea to Speak at TEA Summit March 16