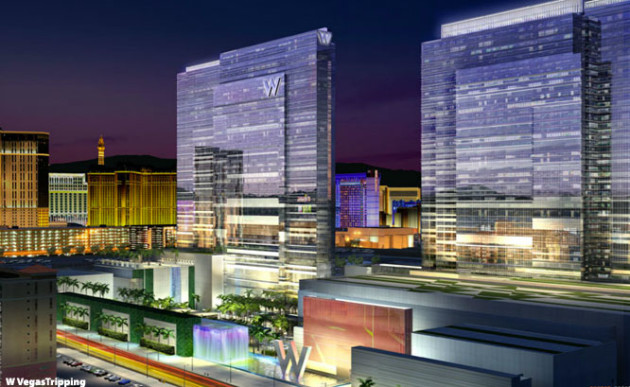 The 60.45-acre property is the consolidation of three sites that were previously slated for the Las Ramblas Resort, the W Las Vegas (wlasvegas.com) and an urban D.R. Horton development. The Las Ramblas Resort, a proposed hotel, resort and casino project owned by a group of investors that included George Clooney and Rande Gerber, called for 11 towers encompassing a 4,400 room luxury hotel, condominium residences, a spa and health club, nightclubs and a casino. The Las Ramblas project was cancelled in 2006. The W Las Vegas, which also did not come to fruition, was a proposed condo-hotel project that was to include 4,000 hotel rooms and residences with a casino and an assortment of shops and restaurants [EDITOR’S UPDATE 12 January 2017: The W Las Vegas is now open as part of the SLS Las Vegas Resort, formerly The Sahara]. The planned D. R. Horton development was slated to include 1,000 residential units over a ground-level grocery store and retail strip.

The entire 60.45-acre property was purchased by a large investment firm in 2007.  In 2009, this group obtained a special use permit for over 8 million square feet of development.  That use permit is still valid today. In 2014, the site was subsequently foreclosed upon by a consortium of lenders. CBRE is representing the owners in the sale of the property.

According to Knott, this is one of the most exciting properties to become available in Las Vegas in many years.  “Situated between two iconic properties – Planet Hollywood and Hard Rock – this parcel is ripe for development,” said Knott.  “As the global and local economy rebounds and 2014 visitation to Las Vegas topped 41 million tourists, the time is perfect for the right visionary to realize the potential of this incredibly valuable piece of Las Vegas real estate.  The possibilities are endless and exciting.”

In addition to proximity to the Las Vegas Strip and a prime resort location, the property is located close to the Las Vegas Convention Center, one of the busiest convention venues in the country.  The area will soon be transformed as the Las Vegas Global Business District via a planned 10-year, $2.5 billion expansion and redevelopment initiative that will significantly enhance the Convention Center, add a World Trade Center and improve the entire area via aesthetic enhancements and technology upgrades.

Joe Kleimanhttp://wwww.themedreality.com
Raised in San Diego on theme parks, zoos, and IMAX films, Joe Kleiman would expand his childhood loves into two decades as a projectionist and theater director within the giant screen industry. In addition to his work in commercial and museum operations, Joe has volunteered his time to animal husbandry at leading facilities in California and Texas and has played a leading management role for a number of performing arts companies. Joe has been News Editor and contributing author to InPark Magazine since 2011. HIs writing has also appeared in Sound & Communications, LF Examiner, Jim Hill Media, and MiceChat. His blog, ThemedReality.com takes an unconventional look at the attractions industry. Follow on twitter @ThemesRenewed Joe lives in Sacramento, California with his fiancé, two dogs, and a ghost.
Share
Facebook
Twitter
Linkedin
Email
Print
WhatsApp
Pinterest
ReddIt
Tumblr
Previous articleNewest LEGOLAND Hotel Opens in Florida
Next articleFinding Nemo Themed Simulator to Replace StormRider at Tokyo DisneySea