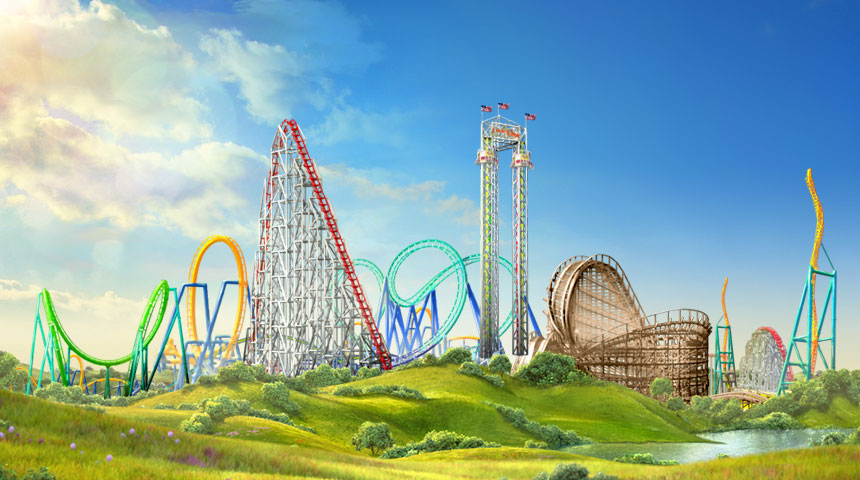 Matt Ouimet, Cedar Fair’s chief executive officer said, “This past year was the most successful year in our history.  The talented teams at all of our parks, the popularity of our innovative attractions and the ongoing success of our marketing programs combined to produce our seventh consecutive year of record results.  Based on our 2016 performance and our expectations for the coming year, we are on track to achieve our long-term Adjusted EBITDA target of $500 million by the end of 2017, a full year earlier than our original forecast.

“I am particularly pleased we, once again, achieved solid growth across our three core revenue metrics of attendance, in-park guest per capita spending and out-of-park revenues, including our resort accommodations,” added Ouimet.  “We credit this achievement to our unique regional brands and the positive responses we have received for our special events programming and immersive entertainment offerings.  These individual park brands allow us to provide our guests an experience unmatched by other generic amusement parks.  This in turn has resulted in strong guest loyalty within the regions we operate and decades of record growth across all revenue channels.

“I am proud of what our leadership team and employees were able to accomplish this year – producing strong results in the near term while still focusing on growing the business and creating value for our unitholders over the long term,” continued Ouimet.  “The success of our operations, combined with many long-term initiatives coming on line, gives us great confidence in our ability to continue our record-setting trends for years to come.”

Operating costs and expenses for 2016 totaled $827 million, up $33 million, or 4% from the prior year.  The increase reflects higher costs to support the increased attendance and guest spending, combined with higher labor costs due to market/minimum wage rate increases and normal merit increases.  As a percentage of sales, operating costs and expenses were comparable with the prior year.

Adjusted EBITDA, which management believes is a meaningful measure of the Company’s park-level operating results, increased 5%, or $22 million, to $481 million in 2016, compared with $459 million last year.  Adjusted EBITDA margin increased by 10 basis points to 37.3%, as a result of the record attendance and guest spending levels, offset somewhat by the higher labor costs mentioned above.  See the attached table for a reconciliation of net income to Adjusted EBITDA.

Brian Witherow, Cedar Fair’s executive vice president and chief financial officer, said, “Our liquidity, cash flow and capital structure remain strong, and we continue to have great financial flexibility heading into 2017, which positions us well to capitalize on our opportunities to drive additional long-term value for our unitholders.  In addition, 2016 represented our 30th consecutive year of paying a distribution to unitholders.  During this time, we have paid to unitholders approximately $2.3 billion in distribution payments, contributing to an annual total return to investors of 17%.”

As of December 31, 2016, Cedar Fair had $597 million of variable-rate debt (before giving consideration to fixed-rate interest rate swaps), $940 million of fixed-rate debt, no outstanding borrowings under its revolving credit facilities and cash on hand of $123 million.  The Company’s cash flows from operations and credit facilities are expected to be sufficient to meet working capital needs, debt service, planned capital expenditures and distributions for the foreseeable future.

“We’ve received excellent responses to the new rides and attractions announced for our parks in 2017,” said Ouimet.  “These marketable capital projects are scheduled to open on time and on budget, including the new Mystic Timbers wooden roller coaster at Kings Island and the newly rebranded and expanded water parks at Cedar Point and Knott’s Berry Farm.  I am also pleased to say that our advance purchase commitments, including season pass sales and all-season dining and beverage sales, are trending well ahead of last year’s record levels at this time.  We believe these sales are driven by the enthusiasm for our 2017 capital investment projects and additional special-event programming, including the introduction of three new WinterFest holiday festivals.”

The Company also continues to advance important long-term initiatives that position it to grow well into the future.  In March, it will host its first tournament at the Cedar Point Sports Center.  This facility is already receiving strong interest from baseball, softball, lacrosse and soccer teams, which will drive additional demand for hotel rooms and park admissions.  To serve that additional demand, Cedar Point will increase its hotel room count by nearly 20% over the next two years.

Additionally, Cedar Fair recently received approval on its rezoning application for its Great America amusement park in Santa Clara, California.  This approval will allow the Company to better capture the growth opportunities in this very attractive market by aggressively investing to enhance the park’s attractions and entertainment offerings.

Ouimet concluded by saying, “We are committed to broadening the guest experience and becoming more than just a place to ride rides.  Our high-quality assets, well-run parks and constant focus on operating excellence continue to differentiate Cedar Fair, and, our unique blend of thrills and family entertainment creates a loyal, repeat customer base.  As a result, we remain confident in the long-term strength of our business and our ability to achieve our FUNforward 2.0 goals.

Joe Kleimanhttp://wwww.themedreality.com
Raised in San Diego on theme parks, zoos, and IMAX films, InPark's Senior Correspondent Joe Kleiman would expand his childhood loves into two decades as a projectionist and theater director within the giant screen industry. In addition to his work in commercial and museum operations, Joe has volunteered his time to animal husbandry at leading facilities in California and Texas and has played a leading management role for a number of performing arts companies. Joe previously served as News Editor and has remained a contributing author to InPark Magazine since 2011. HIs writing has also appeared in Sound & Communications, LF Examiner, Jim Hill Media, The Planetarian, Behind the Thrills, and MiceChat His blog, ThemedReality.com takes an unconventional look at the attractions industry. Follow on twitter @ThemesRenewed Joe lives in Sacramento, California with his wife, dog, and a ghost.
Share
Facebook
Twitter
Linkedin
Email
Print
WhatsApp
Pinterest
ReddIt
Tumblr
Previous articleNewest Themed Coaster Experience at Ferrari World Abu Dhabi Opens in March
Next articleRadTech Now Offering Open Access to Technical Papers and Proceedings