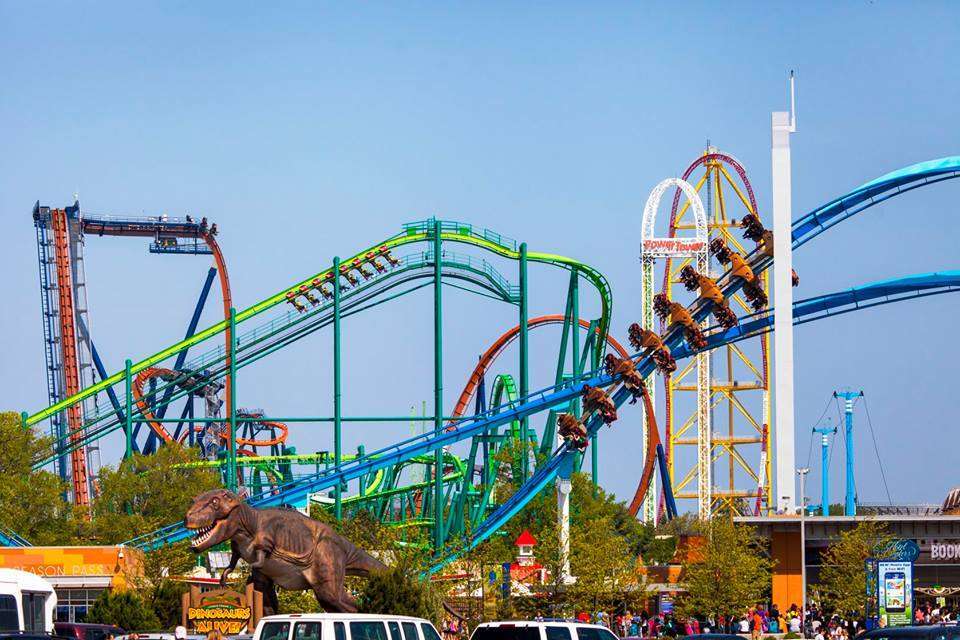 Full-year Adjusted EBITDA of $479 million declined $2 million, or less than 1%, from the record Adjusted EBITDA achieved in the prior year, due to higher operating costs combined with lower than anticipated attendance growth.

Sales from advance purchase commitments, including season passes, through the end of January are up 10% from the same time last year, driven by a strong capital program for 2018.

“We are pleased to report a record fourth quarter performance as our parks had a strong finish to 2017,” said Richard Zimmerman, Cedar Fair’s president and chief executive officer.  “Guests of all ages responded well to our new WinterFest celebrations and our expanded Haunt events were more popular than ever.  Although we faced challenges from the extreme weather patterns earlier in the year, we remained focused on the guest experience and the long-term success of the business.  This focus has enabled us to generate solid increases across all of our advance purchase channels for 2018, giving us confidence that the momentum we generated at the end of 2017 will continue.”

Zimmerman added, “Once again, we achieved solid growth across our core revenue metrics in 2017, including attendance and in-park guest per capita spending.  Our consistent year-over-year growth in these key categories results from our unique regional brands and immersive entertainment experiences which have established our parks as THE place to be for FUN in the regions we operate.”

The Company attributes the increase in attendance to its strong capital program, including Mystic Timbers, a world-class wooden roller coaster at Kings Island, and the expansion of its two separately-gated water parks at Knott’s Berry Farm and Cedar Point.  The Company also introduced and expanded its immersive special events, such as a month-long celebration at Canada’s Wonderland in honor of that country’s 150th anniversary, the expansion of the Company’s daytime Halloween events across all of its parks and the introduction of three new WinterFest celebrations in November and December.  Excluding a non-core, stand-alone water park that was closed in September 2016, attendance on a same-park basis for 2017 increased 3%, or 856,000 visits.

Revenues from the Company’s resort accommodations, which is the primary source for out-of-park revenues, were comparable with last year.  The decrease in out-of-park revenues was the result of prior-year revenues received from a Super Bowl 50 special event and the timing of other miscellaneous revenues.

Operating costs and expenses for 2017 totaled $863 million, up $35 million, or 4%, from the prior year.  The increase was primarily attributable to an increase in labor costs due to higher market/minimum wage rates, higher operating costs and supplies related to new multi-week special events, an expanded multi-year marketing initiative to more aggressively market certain parks as regional destinations, and a non-recurring legal settlement.  Although the cost of food, merchandise and games also increased as a result of higher volume, these costs as a percent of sales were comparable with a year ago.

Adjusted EBITDA, which management believes is a meaningful measure of the Company’s park-level operating results, was $479 million, down less than 1 percent, or $2 million, when compared with the record Adjusted EBITDA achieved in 2016.  The decline in Adjusted EBITDA resulted primarily from the increase in operating costs and expenses noted above combined with lower-than-anticipated attendance growth.  While the Company reported record attendance in 2017, its growth was lower than anticipated due to more than a few instances of unfavorable weather on some of the Company’s peak attendance days in July and August – including Labor Day weekend.  See the attached table for a reconciliation of net income to Adjusted EBITDA.

Brian Witherow, Cedar Fair’s executive vice president and chief financial officer, said, “Our liquidity, cash flow and capital structure remain strong, and we continue to have great financial flexibility heading into 2018.  With our Consolidated Leverage Ratio at 3.5 times, we are well positioned to capitalize on opportunities to drive additional long-term value for our unitholders.  In addition, 2017 was our 31st consecutive year of paying a distribution to unitholders, and we remain committed to steadily increasing our  distribution rate by 4% on an annual basis, consistent with our long-term growth expectations.”

As of December 31, 2017, Cedar Fair had $735 million of variable-rate debt (before giving consideration to fixed-rate interest rate swaps) and $950 million of fixed-rate debt (excluding amounts related to debt issuance costs), no outstanding borrowings under its revolving credit facilities and cash on hand of $166 million.  The Company’s cash flows from operations and credit facilities are expected to be sufficient to meet working capital needs, debt service, planned capital expenditures and distributions for the foreseeable future.

“Our new rides and attractions announced for our parks in 2018 have generated great excitement and anticipation as we continue to enhance the guest experience,” said Zimmerman.  “Highlights of our robust capital plan include Steel Vengeance, a record-breaking hyper-hybrid coaster at Cedar Point, and Hang Time, the West Coast’s first dive coaster, at Knott’s Berry Farm, along with the expansion of Carowinds’ PEANUTS-themed children’s area with Camp Snoopy.  Our multi-week special events, including the introduction of WinterFest at Kings Dominion and the continued benefits of unique, immersive events introduced in 2017, will also be key drivers of our success in 2018 and beyond.”

In addition to the new rides and attractions, the Company’s flagship park, Cedar Point, will look to strengthen its appeal as a multi-day family destination, when the historic Hotel Breakers opens its new five-story, 158-room addition on the park’s mile-long beach. The Company also continues to invest in its unique culinary experiences with new or upgraded restaurants and catering areas at five of its parks.  These facilities will provide a more diverse array of regional specialty foods, cater to increased group business, and accommodate more food-themed special events.

For families with young children, the Company is expanding its successful “Pre-K Pass” program in which children aged 3 to 5 may receive a free season pass.  In 2018, Cedar Point, Carowinds, Kings Dominion and three other parks will offer the free Pre-K season pass to make it easier for younger families to visit the parks repeatedly throughout the year.

Zimmerman also noted that the Company continues to advance important long-term initiatives that will position it to grow well into the future.  In 2017,  Cedar Point launched a new multi-year marketing campaign to position this park as a true regional resort destination.  “The brand research and positioning we performed this year clearly point to a new population of guests who will see Cedar Point as the highlight of a multi-day stay they can’t get anywhere else.  The entire family can enjoy the park, play on the mile-long beach, stay at the historic Hotel Breakers, and sample a diverse array of food and entertainment to create an experience like no other, creating memories that last long after the return trip home,” said Zimmerman.

In addition, the Company recently finalized a deal to build a 129-room, SpringHill Suites hotel adjacent to Carowinds in Charlotte, NC.  The hotel is scheduled to break ground later this year and should come on line in late 2019.  “This opportunity to activate more of our undeveloped land not only broadens our park offerings and enhances the guest experience, but will also provide us additional hotel revenue when the park is closed,” added Zimmerman.

Zimmerman concluded by saying, “This is an exciting time for Cedar Fair and consumer demand for our offerings is strong.   We are off to a great start with early-season advanced sales trending well ahead of this time last year, and our new PEANUTS-themed celebration at Knott’s Berry Farm has opened to rave reviews.  We remain confident in our business model and expect to maintain our average 4% growth trajectory well into the future, similar to the growth we have achieved over the past six years.  In doing so, we remain committed to a steady 4% increase in our annual distribution rate going forward, making FUN an attractive investment for many years to come.”

Joe Kleimanhttp://wwww.themedreality.com
Raised in San Diego on theme parks, zoos, and IMAX films, InPark's Senior Correspondent Joe Kleiman would expand his childhood loves into two decades as a projectionist and theater director within the giant screen industry. In addition to his work in commercial and museum operations, Joe has volunteered his time to animal husbandry at leading facilities in California and Texas and has played a leading management role for a number of performing arts companies. Joe previously served as News Editor and has remained a contributing author to InPark Magazine since 2011. HIs writing has also appeared in Sound & Communications, LF Examiner, Jim Hill Media, The Planetarian, Behind the Thrills, and MiceChat His blog, ThemedReality.com takes an unconventional look at the attractions industry. Follow on twitter @ThemesRenewed Joe lives in Sacramento, California with his wife, dog, and a ghost.
Share
Facebook
Twitter
Linkedin
Email
Print
WhatsApp
Pinterest
ReddIt
Tumblr
Previous article
Mob Museum Debuts Phase One of Major Renovation
Next article
Management Changes at IAAPA as President and CEO Paul Noland Resigns to Pursue New Employment