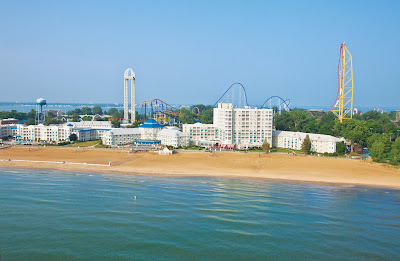 “With its sprawling Breakers Hotel, pristine nationally-known beach, Atlantic City-style boardwalk “roller chairs,” and shoreline rides like the Water Toboggan, the Cedar Point peninsula was crowded every summer with visitors anxious to spend lots of days and nights at the Erie County resort.

“Matt Ouimet thinks Cedar Point can be that way again.

“The trio of company-owned hotels — the historic Breakers Hotel, upscale Sandcastle Suites, and 12-year-old Breakers Express hotel — at Cedar Point must become “more than a room for the night,” Mr. Ouimet said.

“The former Walt Disney Co. executive said the importance of Cedar Point to its parent company is obvious.

“’It’s more a destination resort or super regional park than any of the other parks we have. Its resorts play a much bigger role here than we would see at any of our other parks,’ Mr. Ouimet said.

“After 18 months at Cedar Fair’s headquarters, which is nestled between Cedar Point’s nostalgic buildings and beach and is but a short walk from the park’s midway, Mr. Ouimet agrees with those customers who want a restoration of the park’s hotel and beach properties.

“’I’ve become enamored with this place,’ he said of the 106-year-old park. ‘This is a very important asset not only to our company, but to the state of Ohio.’After 18 months at Cedar Fair’s headquarters, which is nestled between Cedar Point’s nostalgic buildings and beach and is but a short walk from the park’s midway, Mr. Ouimet agrees with those customers who want a restoration of the park’s hotel and beach properties.

“Mr. Ouimet envisions hotels with greater ambience — an aspect he may have learned from running Disney’s Cruise Ship lines — and a beach where families can play, stroll, and bathe in the Lake Erie waters during breaks from the amusement park or nearby Soak City water park.

“To make that vision reality, two weeks ago Cedar Fair announced it would sell its Knott’s Soak City water park in the San Diego suburb of Chula Vista to SeaWorld Parks & Entertainment. Cedar Fair will use the sale’s proceeds to help fund makeovers at its Cedar Point hotels.”

Joe Kleimanhttp://wwww.themedreality.com
Raised in San Diego on theme parks, zoos, and IMAX films, Joe Kleiman would expand his childhood loves into two decades as a projectionist and theater director within the giant screen industry. In addition to his work in commercial and museum operations, Joe has volunteered his time to animal husbandry at leading facilities in California and Texas and has played a leading management role for a number of performing arts companies. Joe has been News Editor and contributing author to InPark Magazine since 2011. HIs writing has also appeared in Sound & Communications, LF Examiner, Jim Hill Media, and MiceChat. His blog, ThemedReality.com takes an unconventional look at the attractions industry. Follow on twitter @ThemesRenewed Joe lives in Sacramento, California with his fiancé, two dogs, and a ghost.
Share
Facebook
Twitter
Linkedin
Email
Print
WhatsApp
Pinterest
ReddIt
Tumblr
Previous articleSt Louis Zoo Holds Open House on Expansion Plans
Next articleBob Gurr on "Building Disneyland" at The Walt Disney Family Museum