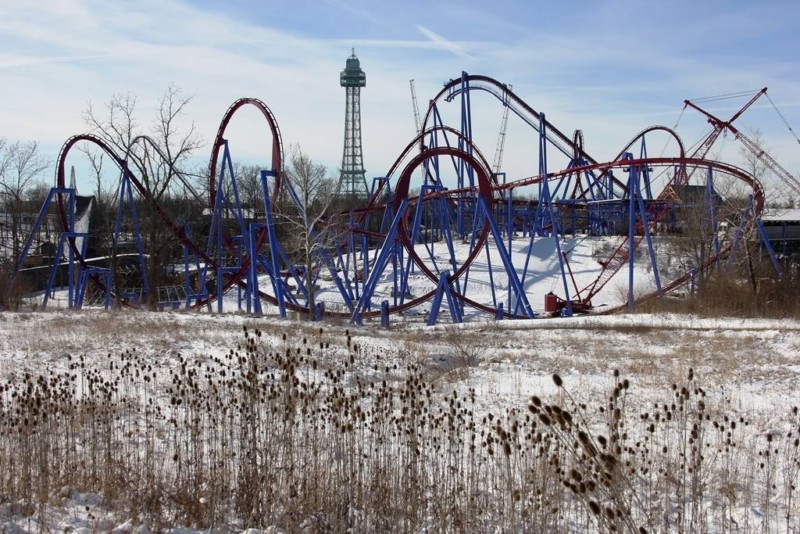 [quote]For 2014, our teams are working harder than ever to find new ways to surprise our guests as they walk through our gates – Matt Ouimet[/quote]

Commenting on the results for 2013, Matt Ouimet, Cedar Fair’s president and chief executive officer, said, “We are pleased to report 2013 was a remarkable year for Cedar Fair and we expect this momentum to continue into 2014. Our long-term FUNforward strategy is working well as we experienced solid increases across all aspects of our business this year, including record attendance and in-park guest per capita spending.”

Ouimet added, “Our focus on continually enhancing the guest experience has been the unifying theme of our long-term strategy. In 2013, guests responded favorably to all of our investments in new world-class rides, family entertainment and premium guest experiences. For example, GateKeeper, a record-breaking winged coaster atCedar Point, experienced one of the best ride openings in the park’s history, while the new Boardwalk area at Knott’s Berry Farm in southern California brought more families to the park than ever before. We are also seeing a great response to our expanded water park offerings, most notably at World’s of Fun which experienced record results as well.

Ouimet continued, “Our capital projects are currently scheduled to open on time and on budget, including Banshee, our record-breaking roller coaster at Kings Island, and Wonder Mountain’s Guardian, our interactive 4-D dark ride at Canada’s Wonderland. After this cold and snowy winter, our guests will be ready to get out of the house to enjoy some nice warm summer days on our midways with their friends and family. We are looking forward to providing even more thrills, screams and smiles as we kickoff the 2014 season.”

Ouimet concluded by stating, “I am pleased with our current financial condition, including our liquidity and cash flow performance. At the end of the year, our Consolidated Leverage ratio was 3.6 times, which is down from 4.2 times as recently as two years ago. As we look ahead, we expect 2014 to be another record year in terms of net revenues and Adjusted EBITDA, and we are confident we will continue to build on our decades of success for many years to come.”

Cost of goods sold decreased to $91.8 million due to savings initiatives in the Company’s food and beverage programs, while operating expenses increased to $472.3 million and selling, general and administrative expenses increased to $152.4 million. The increase in these costs and expenses was largely attributable to the parks entertaining a record number of guests in 2013. Also contributing to these increases were higher staffing levels to support additional revenue growth initiatives, investments in new revenue and customer relationship management platforms, higher normal operating and maintenance expenses associated with enhancing park infrastructures, and higher incentive compensation due to the strong current-year performance. As a percentage of sales, these costs decreased 90 basis points to 63.2% in 2013, from 64.1% in 2012.

Brian Witherow, Cedar Fair’s executive vice president and chief financial officer, said, “Our liquidity and cash flow remain strong. With our record 2013 performance, combined with the sale of two non-core assets and the first-quarter refinancing of a large portion of our debt, we continue to improve our capital structure and operating flexibility. We intend to maintain our strong financial position for 2014 and beyond as we continue to manage our cash flows and capital structure, creating value for unitholders over the long-term.”

As of December 31, 2013, Cedar Fair had $618.9 million of variable-rate debt (before giving consideration to fixed-rate interest rate swaps), $901.8 million of fixed-rate debt, no outstanding borrowings under its revolving credit facilities and cash on hand of $118.1 million. The Company’s credit facilities and cash flows from operations are expected to be sufficient to meet working capital needs, debt service, planned capital expenditures and distributions for the foreseeable future.

The Company’s capital program is designed to drive positive results in both the short- and long-term. For the 2014 season, the Company plans to invest approximately $145 million in capital across its properties. The highlight of the 2014 capital program is Banshee, the world’s longest inverted steel coaster, which will make its debut at Kings Island, in Cincinnati, Ohio. In addition, Cedar Fair will introduce the first edition of its “Amusement Dark” portfolio, Wonder Mountain’s Guardian at Canada’s Wonderland, which is an interactive 4-D dark ride featuring the world’s longest interactive screen. Marketable capital for 2014 will also feature a complete revival of the Camp Snoopy area at Knott’s Berry Farm in Buena Park, California, a major waterpark expansion at Dorney Park and Wildwater Kingdom in Allentown, Pennsylvania and a refreshment of the Gemini Midway, including several new family-oriented attractions at Cedar Point in Sandusky, Ohio. For the 2014 season, resort guests at Cedar Point will experience a new outside look at the historic Hotel Breakers as the first phase in the property’s two year renovation is completed. The Company also plans to introduce new cabin accommodations at two of its properties and will launch a new company-wide in-park TV network, allowing further interaction with its guests.

Ouimet concluded, “While it is still too early to identify a trend, we are pleased to see both season pass and group business sales pacing ahead of where they were this time last year. With this in mind, we are confident in our ability to achieve our FUNforward long-term growth goal of $450 million in Adjusted EBITDA earlier than our original target of 2016.” 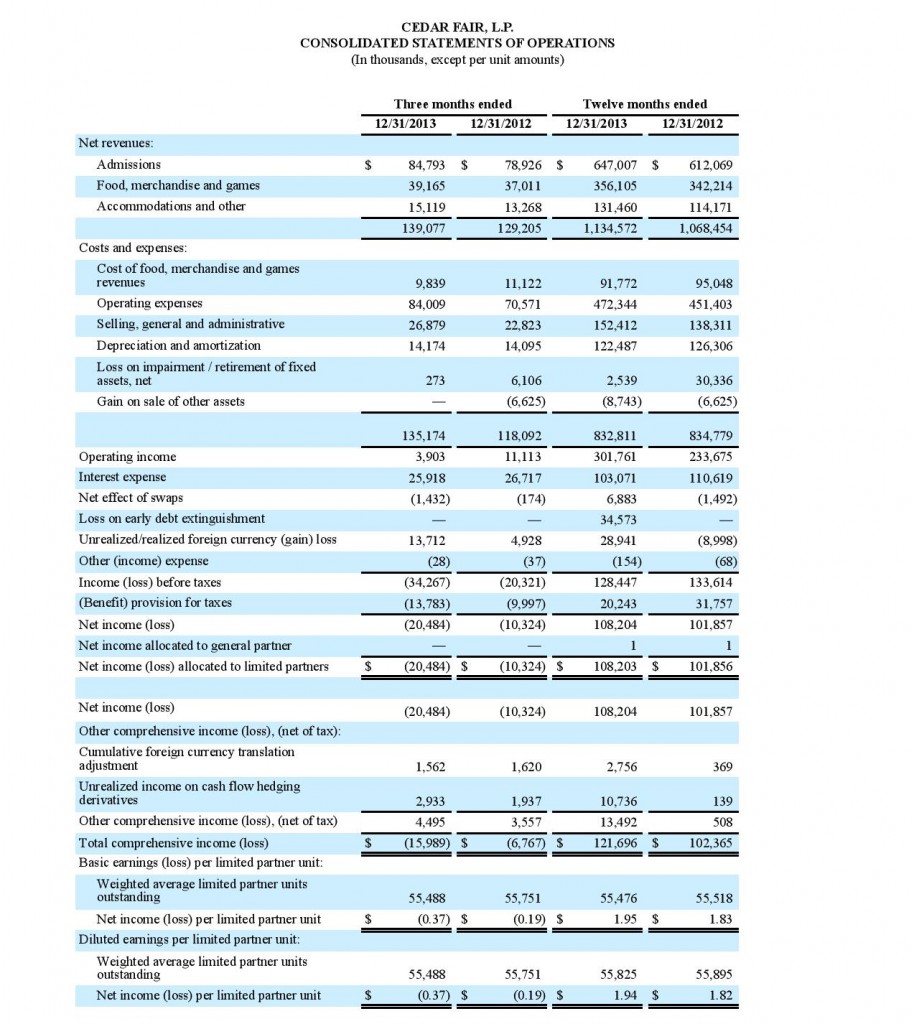 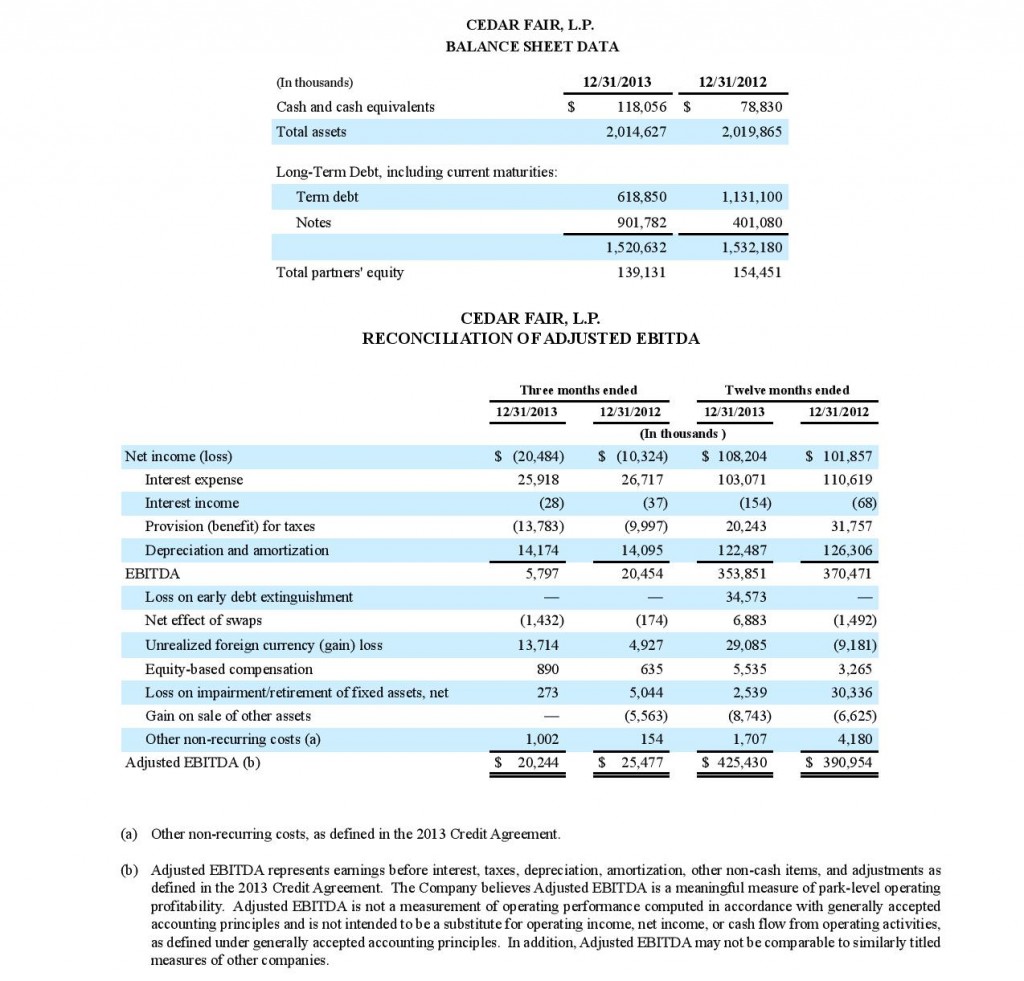 Joe Kleimanhttp://wwww.themedreality.com
Raised in San Diego on theme parks, zoos, and IMAX films, InPark's Senior Correspondent Joe Kleiman would expand his childhood loves into two decades as a projectionist and theater director within the giant screen industry. In addition to his work in commercial and museum operations, Joe has volunteered his time to animal husbandry at leading facilities in California and Texas and has played a leading management role for a number of performing arts companies. Joe previously served as News Editor and has remained a contributing author to InPark Magazine since 2011. HIs writing has also appeared in Sound & Communications, LF Examiner, Jim Hill Media, The Planetarian, Behind the Thrills, and MiceChat His blog, ThemedReality.com takes an unconventional look at the attractions industry. Follow on twitter @ThemesRenewed Joe lives in Sacramento, California with his wife, dog, and a ghost.
Share
Facebook
Twitter
Linkedin
Email
Print
WhatsApp
Pinterest
ReddIt
Tumblr
Previous article
Madame Tussauds New York Unveils Interactive Music Experience
Next article
Aqua Drag Racer Zooming Into Wet ‘n’ Wild Orlando