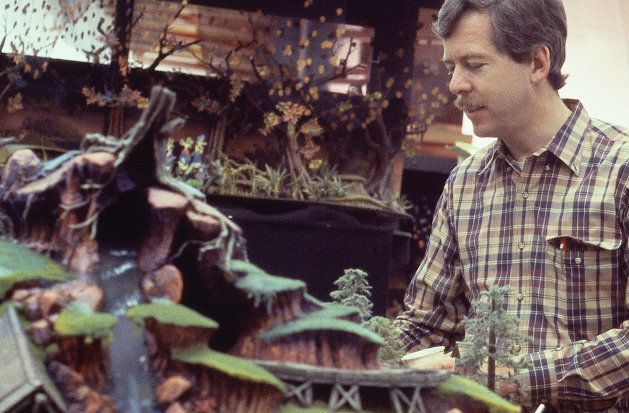 Former Imagineer Tony Baxter retired two years ago following an illustrious four-decade career with the Walt Disney Company. His accomplishments include: designing Splash Mountain, Big Thunder Mountain Railroad and Indiana Jones and the Temple of the Forbidden Eye at Disneyland.

Bill Farmer is best known as the voice of Goofy and Pluto for the Walt Disney Company for more than 20 years. He has also been the voice for many other Disney, Hanna Barbara and Looney Tune cartoon characters.

A blast to Disneyland’s past will be on hand as legendary Coke Corner Pianist Rod Miller will be tinkling the ivories.

The Hollywood Clarinet Quartet will lend their smooth Jazz sounds to the evening, along with other musical guests to be announced.

On hand to emcee the event will be the voices of Disneyland and of Disney California Adventure, Bill Rogers and Camille Dixon.

Mickey Mouse is also scheduled for an appearance.

The Disneyland Alumni Club, Inc., a 501(c) (3) non-profit organization, will hold the celebration the evening of Saturday, August 1st at the Disneyland Hotel. A portion of the proceeds from the event, including the evening’s silent auction, will benefit the Boys & Girls Clubs of Fullerton.

Disney Legends Van France and Wally Boag created the club in 1983 as a way for current and past Disneyland Cast Members to stay in touch and to work on projects to better the community. Prices for the evening are $140 per individual, and $1,000 for a table of 8 or $1,280 for a table of 10. A portion of the ticket price may be tax deductible.

Tickets for the event are on sale now through the club’s website: disneylandalumni.org.
For more information email: [email protected] or call: 714-882-8155

Joe Kleimanhttp://wwww.themedreality.com
Raised in San Diego on theme parks, zoos, and IMAX films, InPark's Senior Correspondent Joe Kleiman would expand his childhood loves into two decades as a projectionist and theater director within the giant screen industry. In addition to his work in commercial and museum operations, Joe has volunteered his time to animal husbandry at leading facilities in California and Texas and has played a leading management role for a number of performing arts companies. Joe previously served as News Editor and has remained a contributing author to InPark Magazine since 2011. HIs writing has also appeared in Sound & Communications, LF Examiner, Jim Hill Media, The Planetarian, Behind the Thrills, and MiceChat His blog, ThemedReality.com takes an unconventional look at the attractions industry. Follow on twitter @ThemesRenewed Joe lives in Sacramento, California with his wife, dog, and a ghost.
Share
Facebook
Twitter
Linkedin
Email
Print
WhatsApp
Pinterest
ReddIt
Tumblr
Previous articleVIDEO: Bob Rogers of BRC Imagination Arts on the Creation of the Lincoln Presidential Library
Next articleFirst Details Emerge About Wizarding World of Harry Potter at Universal Studios Hollywood Including 1st in US 3D Forbidden Journey