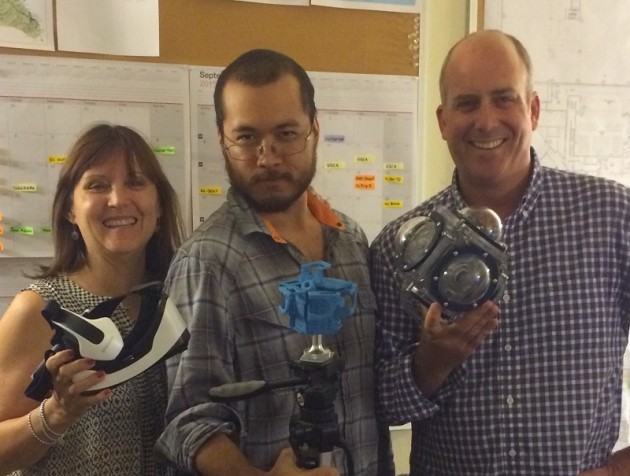 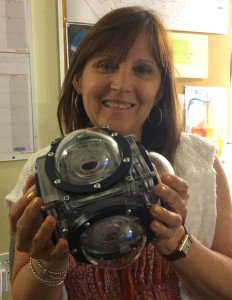 Huggins is well known in the themed entertainment space as a pioneering special venue producer of 3D content for theme parks, giant screen theaters in museums and science centers, and world expo pavilions. Some prominent work includes serving as VFX Producer on “Honey, I Shrunk the Audience” for Disney, and as Producer on “3D Mania” and “Thrill Ride” for nWave Pictures. In the feature film world, her Producer credits include “Journey to the Center of the Earth” and “Journey to the Mysterious Island” (New Line/Warner Bros.) and “Metallica Through the Never” (Blackened/Picturehouse).

Current VR development is predominately tied to in-home use for social media and real-time gaming. However, “We’re not going to do either of those,” says Huggins. “We’re producing cinematic experiences for fun, thrills and immersive entertainment: pre-rendered, 360° shows 4-18 minutes long, for out-of-home venues.”

In order to further improve the quality of their cinematic VR experiences, AXYZ is currently developing a custom 360 camera system which will be more portable and easier to use for location based live-action photography, and will also help simplify the post production process.

AXYZ Studios is active within the Themed Entertainment Association (TEA) and a sponsor of TEA’s booth at the IAAPA Attractions Expo.

“Today’s VR technology has the speed, precision, detail, accuracy and robustness needed to deliver a quality guest experience in the demanding, 24/7 theme park environment,” says Chung. “And with players such as Google, Facebook and Sony Playstation investing billions of dollars, VR will only get better and more versatile.”

Applications of VR as seen by the AXYZ team include:

Sister company to AXYZ Studios is Pulseworks, a leading manufacturer of motion ride systems and digital content for media-based attractions. The two companies share technology and resources, and Deshpande is a principal of both. “This is absolutely the time and the team for producing VR to deliver the next generation of media-based guest experiences,” he says. We’re very enthusiastic about this venture.”

For more information, or to set up a business meeting or media interview with AXYZ Studios at the IAAPA Attractions Expo in Orlando, contact Vacheh Shahmoradian, [email protected], +1-310-980-4020.

Joe Kleimanhttp://wwww.themedreality.com
Raised in San Diego on theme parks, zoos, and IMAX films, Joe Kleiman would expand his childhood loves into two decades as a projectionist and theater director within the giant screen industry. In addition to his work in commercial and museum operations, Joe has volunteered his time to animal husbandry at leading facilities in California and Texas and has played a leading management role for a number of performing arts companies. Joe has been News Editor and contributing author to InPark Magazine since 2011. HIs writing has also appeared in Sound & Communications, LF Examiner, Jim Hill Media, and MiceChat. His blog, ThemedReality.com takes an unconventional look at the attractions industry. Follow on twitter @ThemesRenewed Joe lives in Sacramento, California with his fiancé, two dogs, and a ghost.
Share
Facebook
Twitter
Linkedin
Email
Print
WhatsApp
Pinterest
ReddIt
Tumblr
Previous articleKnott’s Berry Farm to Bring Historic Ghost Town Alive for 75th Anniversary
Next articleMichael Pharr Joins Rethink as Chief Operating Officer