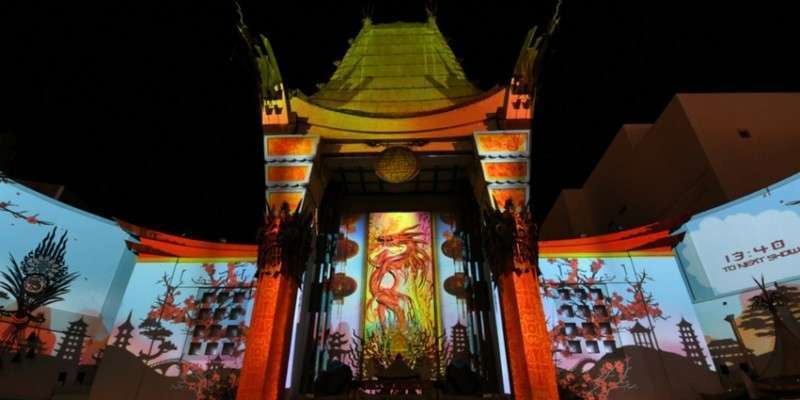 Christie® has won an APEX Award in the category of “Arts, Entertainment & Recreation” for “Hollywood Lights,” a permanent projection mapping show on the façade of TCL Chinese Theatre, which was presented in a reception at DSE 2018 in Las Vegas.

Christie designed “Hollywood Lights” to enhance the guest experience at TCL Chinese Theatre in Hollywood, California by transforming the façade of the iconic theatre into an architectural ‘screen’. Visuals of ‘forecourt of the stars’ handprints, Chinese dragons, and actual movie clips from memorable films that premiered at the Chinese Theatre were projected onto the front of the theatre, lighting up Hollywood Boulevard in a stunning four-minute show.

“This is the biggest outdoor attraction to happen along Hollywood Boulevard since Sid Grauman built the theatre in 1927,” says TCL Chinese Theatre president and COO, Alwyn Hight Kushner.  “Remember, it was 90 years ago when they coined the phrase, ‘the show starts in the sidewalk’,” adds Hight Kushner.  “We are honored to have this major addition to our historic venue recognized in such a prestigious way.”

To create the spectacular permanent projection mapping show, Christie used 2K and 4K Christie Boxer projectors, a Christie Pandoras Box media server to control the show and Christie Twist™ to warp and blend the multi-projector array for a seamless image.

“It’s an honor to be recognized with an APEX award for our work with the TCL Chinese Theatre,” says Denys Lavigne, vice president, Christie 360.  “The Chinese Theatre is a Hollywood landmark, and to celebrate its rich history through projection mapping is an exciting extension of the cinema experience it’s known for. We’re delighted that this show has resonated with spectators.”

The 14th Annual DSE APEX Awards recognize and honor achievement in the installation of digital displays and interactive technology and the creation of compelling viewer content, the DSE APEX Awards have honored hundreds of companies for their innovation throughout the years.

Colours and Shapes Design Inc. won Gold in the category of “Public Spaces” and Bronze in the category of “Immersive Environments” for “Uninterrupted,” a projection mapping display on Vancouver’s Cambie Street Bridge. The show celebrates British Columbia’s annual salmon run with images projected down the length of the bridge using eight Christie 3DLP® projectors.

This year’s APEX Award finalists were chosen by an independent panel of 11 industry experts and journalists from a field of 116 entrants from 10 countries vying in nine major digital signage categories.

Joe Kleimanhttp://wwww.themedreality.com
Raised in San Diego on theme parks, zoos, and IMAX films, InPark's Senior Correspondent Joe Kleiman would expand his childhood loves into two decades as a projectionist and theater director within the giant screen industry. In addition to his work in commercial and museum operations, Joe has volunteered his time to animal husbandry at leading facilities in California and Texas and has played a leading management role for a number of performing arts companies. Joe previously served as News Editor and has remained a contributing author to InPark Magazine since 2011. HIs writing has also appeared in Sound & Communications, LF Examiner, Jim Hill Media, The Planetarian, Behind the Thrills, and MiceChat His blog, ThemedReality.com takes an unconventional look at the attractions industry. Follow on twitter @ThemesRenewed Joe lives in Sacramento, California with his wife, dog, and a ghost.
Share
Facebook
Twitter
Linkedin
Email
Print
WhatsApp
Pinterest
ReddIt
Tumblr
Previous article#72 – Dubai/Museums
Next articleMichael Prager New CEO of Dynamic Motion Rides