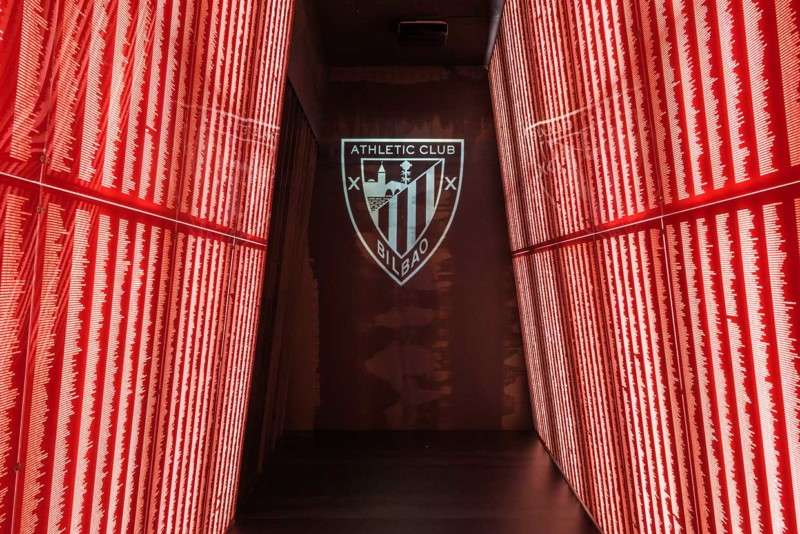 More than 120 years of Athletic Club history is told at the San Mamés stadium museum in Bilbao, Spain, and Christie technology is part of the story.  Founded in 1898, Athletic Club, together with Real Madrid and Barcelona, is one of only three clubs never relegated from Spain’s top football (soccer) division.

More than 500 pieces of memorabilia and nearly 600 videos – most of them interactive – are enshrined in a museum that gives space to color, music, and images. And it’s here where Christie ultra-short throw projection plays a critical role: The museum is outfitted with 30 Christie Captiva DHD410S 1DLP® laser technology projectors, as well as three Christie GS Series projectors, that bring to life the museum’s different audiovisual attractions.

Located in the stadium’s basement, the museum is divided into three distinct areas, differentiated by the team’s green, red and black colors. Visitors first come across a hall lined in metal where they can view visual projection explaining Athletic Club’s founding, showing Bilbao more than a century ago. Measuring 8 x 2 meters, the projection using six Christie Captiva projectors and the three GS Series projectors blending on the wall and floor to create an immersive environment.

Asier Arrate, director of the museum, explained why they chose laser projection technology: “At first, we were thinking about using lamp-based projectors but then we discovered that laser solutions give you much better benefits in terms of less down-time and less expensive running costs. In fact, Erabi prepared a simulation for us of when the projectors are up to 1,200 hours of use, which showed us that the laser light source would save us up to 15,000 Euros in replacing lamps and other consumables.”

As for Christie Captiva, Arrate pointed out that its ultra-short throw lens was crucial: “Thanks to it, the projector can be mounted at a very short distance from the screen or wall, either vertically or horizontally, which means that the public can view content without the appearance of bothersome shadows that interrupt the image. And on top of that they are extraordinarily quiet.”

Eneko Elorriaga, co-founder of Erabi, also sang the praises of the Christie Captiva: “The quality of the ultra-short throw lens is superb, especially for museum applications, because it gives you a much more dynamic experience and avoids those shadows that can be really annoying. Captiva is a projector that guarantees faithful color reproduction and excellent brightness, and with the sterling reliability we have come to expect from Christie.”

“Another factor worth bearing in mind is that they can be controlled by platforms like AMX, Crestron and similar,” Elorriaga added. “At the same time, I would also underscore the fact that you can choose the color of the chassis, in either black or white, which is a plus for museums and something not all brands give you. In addition, being able to use it in portrait mode affords greater wriggle room for creative applications.”

“Time Line” is a restored wooden stand from the old grounds where you can sit and watch a video showing the club’s 120 years of history; this 2 x 1.5 meter projection is screened on a high-contrast canvas tensed in a frame powered by a Christie Captiva. Another Christie Captiva is used in the “Member’s Corridor,” projecting the club’s logo onto a plaque with the names of all the members of the club throughout its history.

Another part of the attraction uses the Captiva projector with the touch option – which enables users to interact with the content – and a tactile infrared frame developed by Virtualware and Erabi to make the interactivity even more lifelike. The wall is coated in high-contrast paint to give the images even greater brightness and contrast.

Several companies were involved in the museum design, including Espai Visual in the museological and museographic development, Virtualware and Mediapro Exhibitions in the production of audiovisual content, Charmex in the supply of projection solutions, and Erabi in the integration and maintenance of all the audiovisual equipment.

Joe Kleimanhttp://wwww.themedreality.com
Raised in San Diego on theme parks, zoos, and IMAX films, InPark's Senior Correspondent Joe Kleiman would expand his childhood loves into two decades as a projectionist and theater director within the giant screen industry. In addition to his work in commercial and museum operations, Joe has volunteered his time to animal husbandry at leading facilities in California and Texas and has played a leading management role for a number of performing arts companies. Joe previously served as News Editor and has remained a contributing author to InPark Magazine since 2011. HIs writing has also appeared in Sound & Communications, LF Examiner, Jim Hill Media, The Planetarian, Behind the Thrills, and MiceChat His blog, ThemedReality.com takes an unconventional look at the attractions industry. Follow on twitter @ThemesRenewed Joe lives in Sacramento, California with his wife, dog, and a ghost.
Share
Facebook
Twitter
Linkedin
Email
Print
WhatsApp
Pinterest
ReddIt
Tumblr
Previous articleSemnox Solutions welcomes Brian Duke as Senior Client Partner
Next articleThe Abyss – VR Space Voyage combines space education and thrills in Ocean Park’s newest VR attraction