Seen by more than 45,000 spectators since its inauguration a  year-and-a-half ago, Nocturnal Experience in Teotihuacan – a projection-mapping experience at this world-famous, UNESCO-designated World Heritage Site – is set to shine again in November, reviving the grandeur of this Mexican archaeological site, thanks to Cocolab, a company specializing in multimedia technology, and Christie®.

Each 45-minute show consists of a number of visuals projected onto the impressive Pyramid of the Sun, then along the Avenue of the Dead and finally reaching the Pyramid of the Moon. A total of 19 Christie Roadie 4K45 projectors illuminated the site with 20 million different color tones, enlivening the projection-mapping show, which is accompanied by the voice of a narrator telling the history of the Teotihuacan culture.

With a duration of 45 minutes, the 280 presentations of Nocturnal Experience in Teotihuacan held to date have been a joint effort of Christie and Cocolab , which worked for a year prior to the opening on creating the mapping visuals in collaboration with the Tourism Department of the State of Mexico, aided by the invaluable advice of INAH (National Institute of Anthropology and History of Mexico).

After putting in place a team of researchers, storytellers, lighting designers, scriptwriters, animators, programmers and engineers, Cocolab created a nocturnal experience for the Teotihuacan archaeological site, developing the technology and contents for the show, concerning the Teotihuacan culture.

The Christie projectors are placed in two mobile units, and are run from Mac Pro units using NUUP software developed by Cocolab. The total brightness of the image powered by the 19 projectors was in excess of 850,000 lumens, a figure never before seen in Mexico. 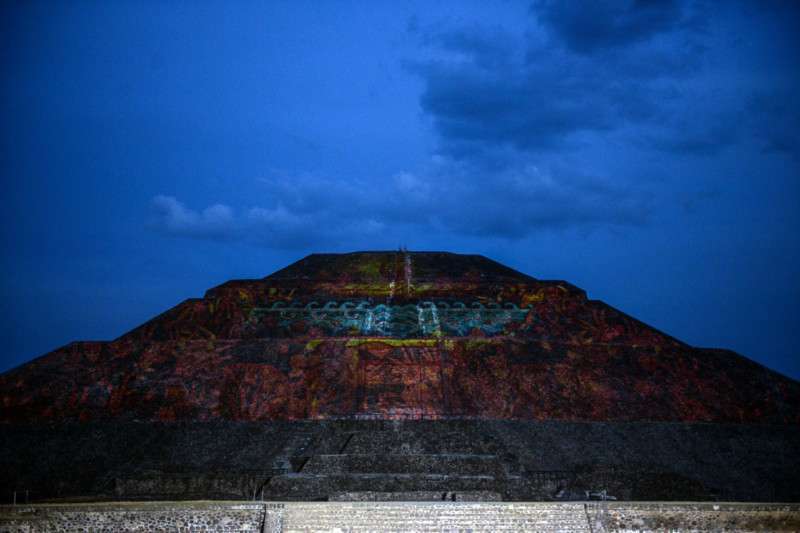 Christie Roadie 4K45 with 3DLP® technology boast a native 4K resolution at 60Hz (upgradeable to 120Hz) and can project 45,000 lumens, making them among the brightest lamp-based projectors in the market. As well, they feature Christie TruLife™ technology, to deliver hyper-realistic colour and unmatched image fidelity.

Ideal for rental-staging applications, the Roadies integrate warping and blending capabilities to facilitate mapping pixels on any surface. “They are really fantastic,” said Alejandro Machorro, founding member at Cocolab, “and guarantee us the brightness and quality we need to deliver the unique experience this project called for.”

Ernesto Armus, general manager, Christie Mexico, echoed Machorro’s view: “We are delighted that our Christie Roadie 4K45 projectors have contributed to this stunning projection-mapping show, which is sure to linger in the audience’s minds for a long time. It’s not often that you get to see such a large number of powerful projectors in a single event in Mexico.”

Armus congratulated “… our esteemed partner, Cocolab, for the instrumental role it played in the technical deployment and organisation of this innovative world-class experience in such an iconic setting as Teotihuacan.”

Cocolab worked to the highest standards of scientific lighting for pre-Hispanic and historical monuments, ensuring that the integrity of the structures and their cultural, historic and artistic values were never jeopardized at any time.

Joe Kleimanhttp://wwww.themedreality.com
Raised in San Diego on theme parks, zoos, and IMAX films, InPark's Senior Correspondent Joe Kleiman would expand his childhood loves into two decades as a projectionist and theater director within the giant screen industry. In addition to his work in commercial and museum operations, Joe has volunteered his time to animal husbandry at leading facilities in California and Texas and has played a leading management role for a number of performing arts companies. Joe previously served as News Editor and has remained a contributing author to InPark Magazine since 2011. HIs writing has also appeared in Sound & Communications, LF Examiner, Jim Hill Media, The Planetarian, Behind the Thrills, and MiceChat His blog, ThemedReality.com takes an unconventional look at the attractions industry. Follow on twitter @ThemesRenewed Joe lives in Sacramento, California with his wife, dog, and a ghost.
Share
Facebook
Twitter
Linkedin
Email
Print
WhatsApp
Pinterest
ReddIt
Tumblr
Previous article
Audubon Louisiana Nature Center Reopens
Next article
Adventure Island Guests Prepare to Enter the Vanish Point