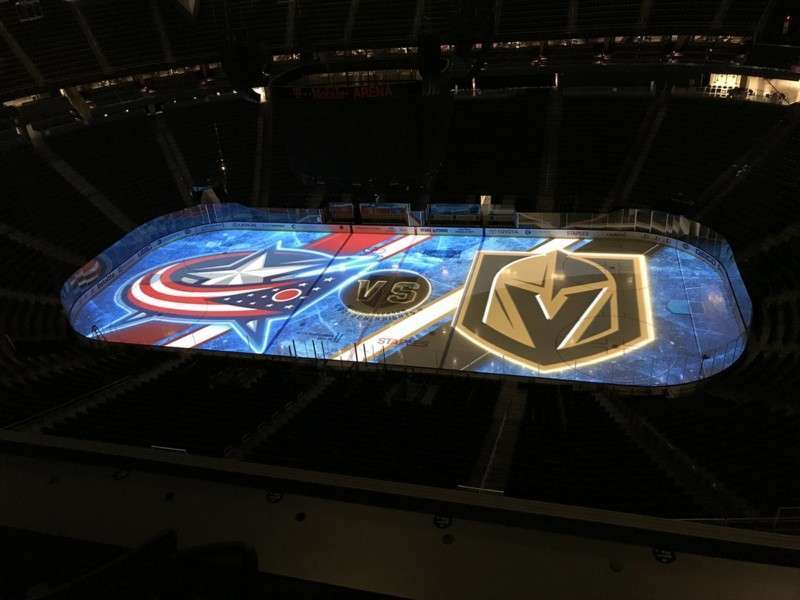 The Vegas Golden Knights hockey team wows its fans in typical Las Vegas-style. A projection mapping show uses Christie® projection and processing technology coupled with the expertise of Image Engineering to engage the crowd and bring the story of the Golden Knights to life on the ice at T-Mobile Arena.

Bringing a professional sports team to Las Vegas – a city known for showmanship and world-class entertainment – is no small feat, and the Vegas Golden Knights have embraced the challenge of playing their home games in the “Entertainment Capital of the World.” One of the top priorities of the team is to create a truly memorable fan experience. The first-year National Hockey League (NHL) club uses 12 Christie WU20K-J projectors, Christie Mystique Install, Christie Pandoras Box and Christie Widget Designer to create the on-ice show. 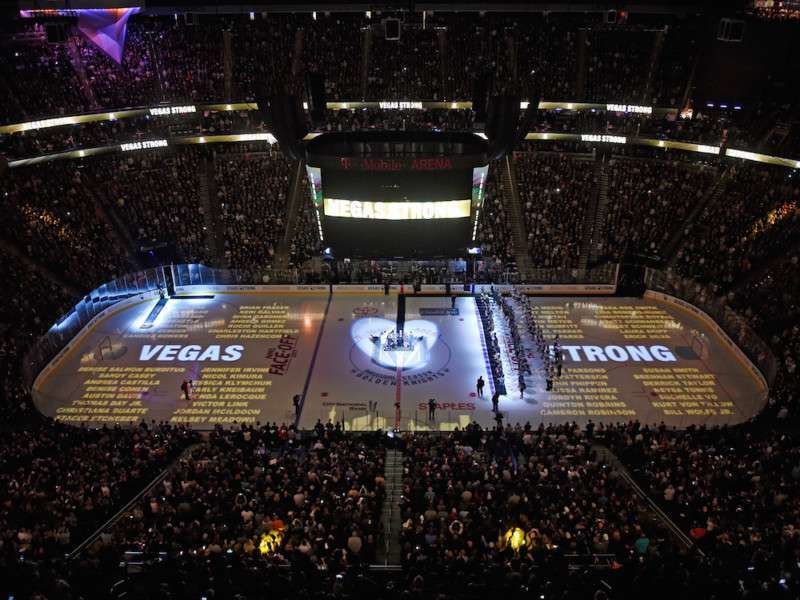 Leading up to the team’s inaugural home game on October 10, 2017, the Vegas Golden Knights and Image Engineering had been collaborating and planning for months on the pre-game and in-game entertainment. However, when the horrific mass shooting occurred in Las Vegas on October 1, the team wanted to respond to the tragedy and do its part to help the community grieve, heal and persevere. This necessitated building an entirely new show.

“We wanted to honor the victims, the survivors and the first responders…months of planning turned into a few days of planning. We were listening to the community and seeing what made the most sense,” says Jonny Greco, Vice President Events and Entertainment, Vegas Golden Knights. The NHL franchise honored the first responders, victims and survivors by projection mapping the names of the 58 victims on the ice followed by 58 seconds of silence.

“It was celebrating this city and acknowledging what had happened and giving Las Vegas the opportunity to honor and grieve together, and then transition into a few hours of time when hopefully they could have some fun and be in a more positive place,” says Greco.

Winning fans over one game at a time 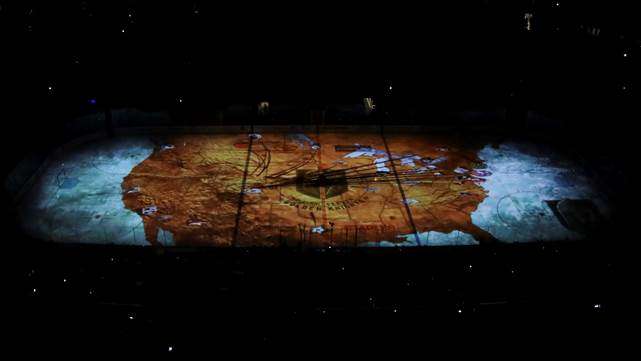 The Golden Knights have been committed to winning fans over since that first game. “Within three hours we have to win them over. It’s quite a concentrated effort,” says Greco. The new franchise knows that expectations are high for one of the NHL’s top teams, and all the elements must work seamlessly to ensure a great fan experience. So for the Golden Knights and Image Engineering, choosing Christie technology was a perfect fit.

“Christie’s reputation obviously is phenomenal and all over this town,” says Greco. “All over The Strip you see Christie projectors. I didn’t have a lot of experience with that coming in and so that’s where you trust great people to do great things at great times – and Image Engineering was able to do that.”

Image Engineering was brought onboard by the Golden Knights to handle the full game presentation, including AV integration. “We took a lot of care to figure out an installation plan that was going to work for T-Mobile Arena because they do have so many large concerts and one-off shows that come in and out so frequently,” explains Ian Bottiglieri, Director of Project Management, Image Engineering.

The twelve projectors are in “pods” of two near each face-off circle, each blue line, and center ice, on each side of the arena. Image Engineering then used Christie Mystique to align the projectors, saving both them and the Golden Knights what would normally be between 8 to 10 hours every time the projectors needed realignment after being repositioned for a concert or other event.

“Mystique was great because it took about four to five hours to get Mystique set up and running for the first time. After that, we didn’t even really need to think about our alignment because we just needed to block out a 15-minute time period to be able to run the Mystique system and everything would be realigned and perfectly warped and blended. That definitely took a lot of angst and anxiousness out of the equation because the alignment wasn’t even a concern because of the Mystique system,” says Bottiglieri.

The Pandoras Box Quad Player is integrated with the time code triggers from the Daktronics system, triggering the content in a synchronized fashion, and, according to Bottiglieri, the Golden Knights’ technical team are rapidly learning what Pandoras Box is capable of and continue to push the envelope with some “cool, creative stuff.”

With extensive experience working with Christie technology “it was a natural fit,” says Bottiglieri. “It wasn’t a question for us of who we were going to use or what the product was going to be.”

The Vegas Golden Knights continue to win fans over with each game. Says Greco, “In the end, it is about winning on the ice and providing a home ice advantage to get wins, but we want to have fun along the way.”

Joe Kleimanhttp://wwww.themedreality.com
Raised in San Diego on theme parks, zoos, and IMAX films, InPark's Senior Correspondent Joe Kleiman would expand his childhood loves into two decades as a projectionist and theater director within the giant screen industry. In addition to his work in commercial and museum operations, Joe has volunteered his time to animal husbandry at leading facilities in California and Texas and has played a leading management role for a number of performing arts companies. Joe previously served as News Editor and has remained a contributing author to InPark Magazine since 2011. HIs writing has also appeared in Sound & Communications, LF Examiner, Jim Hill Media, The Planetarian, Behind the Thrills, and MiceChat His blog, ThemedReality.com takes an unconventional look at the attractions industry. Follow on twitter @ThemesRenewed Joe lives in Sacramento, California with his wife, dog, and a ghost.
Share
Facebook
Twitter
Linkedin
Email
Print
WhatsApp
Pinterest
ReddIt
Tumblr
Previous articleCASE STUDY: Barcelona Symphony Orchestra adds new dimensions to Verdi’s Requiem
Next articleIAAPA Euro Attractions Show Returns to Amsterdam’s RAI Exhibition Centre