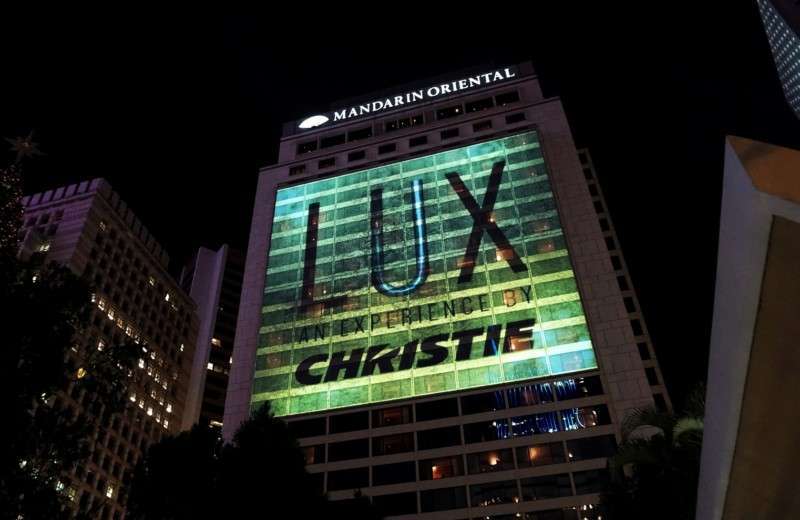 Christie®, together with its partner Avollusion, presented unique light installations and video projections at various landmark sites and buildings during the inaugural Lumieres Hong Kong festival.

Lumieres Hong Kong festival made its debut on November 23, 24 and 25 in celebration of the 20th Anniversary of the Hong Kong SAR Establishment. The festival featured three nights of light installations, video projections, art pieces and dining to experience Hong Kong in a bright new light. Landmark sites and buildings of the city in Sheung Wan, Soho, Central, Tsim Sha Tsui and Kowloon became the canvas for some of the most renowned local and international light artists to showcase their vision of the city’s very own culture. Completely free, Lumieres Hong Kong offers activities and celebrations for the general public, young and old, to rediscover the city’s heritage.

Christie and Avollusion were also the technology partners of this multidiscipline festival of installations, performances, audio effects and audience interaction.

“We’re very proud to be a part of Lumieres Hong Kong and have been working on the technical design since the conceptual stage of the festival. Due to the scarcity of space, we have had to come up with unique solutions to counter the challenges of executing projection mapping projects in Hong Kong,” said Justin Choy, Managing Director, Avollusion. “Through this event, we hope to show that building mapping is indeed possible in Hong Kong and hopefully we can inspire others to come up with new, creative and innovative ideas that help bring the cityscape to life. In the live events world, there is still so much more technology that we want to show the people of Hong Kong, and hopefully this is the first step to making that happen.”

Denys Lavigne, Vice President, Global Christie 360, added, “Lumieres Hong Kong is our first major collaboration since we’ve established our new Hong Kong office and we’re very excited about this project. Exploring new innovative and meaningful ways to integrate digital media experiences in urban environments continues to be a priority for our team. In addition to the collection of large-scale experiences that will be illuminating the city, we are particularly proud of the interactive light painting station we’ve created as it will allow visitors to express themselves and create digital art that they can share on their social media platforms. We are confident that the result of this great collaboration between the Lumieres team, our partner Avollusion and Christie will offer the people of Hong Kong and festival visitors a truly magical experience.”

Lin Yu, Vice President, Christie Asia Pacific, commented, “We’re thrilled to use light as a medium to enhance landmarks sites and buildings in Hong Kong through this major event. It’s also a wonderful opportunity to showcase the talents of local and international light artists to accentuate the beauty and vibrancy of this city. The deployment and usage of Christie projectors at various venues has certainly helped us to achieve this objective of entertaining the public and delivering a fantastic shared experience.”

Among the highlights was projection mapping performance on the façade of the Mandarin Oriental, Hong Kong, one of the most exclusive luxury hotels in the world located on Connaught Road in Central. The projection canvas, measuring 34 meters in width and 33 meters in height, was lit using 10 Christie Boxer 4K30 3DLP® projectors, and managed by Christie Pandoras Box servers, with contents entirely designed and produced by Christie 360.

In addition, Christie established an interactive booth near the hotel to increase users’ engagement and experience. Known as LUX, it elevated the traditional event photo booth to the level of interactive experience. Festival visitors were invited to pose for a snapshot. Then, using analog light sources, virtual brushes and custom-built software, the snapshot was transformed into a piece of dynamic digital art by Christie’s team of light painters. The best visuals were subsequently projected onto the façade of the Mandarin Oriental, Hong Kong as part of the projection mapping showcase.

The projection mapping performance, titled “The Anooki Shake Up Hong Kong” created by French artists Moetu Batlle and David Passegand, bring the “the Old Lady of Pedder Street” to life with a joyful show featuring the Anooki, two lovable Inuit in the world. From a huge trampoline to a giant aquarium, the white façade of the General Post Office became the new playground of the Anooki. Small windows become fountains, filling the building with water. The visuals are made possible using six units of Christie Boxer 4K30 projectors.

The projections on the façade of City Hall, titled “E-motion”, was a journey in time that evokes the evolution of Hong Kong from its past to its present and towards the future, playing with light, shapes, colors and movements. Created by French designer Yves Moreaux, the show transforms the facade of the City Hall in order to suspend the notion of time and immerse the visitor in a bath of images and lights. The massive installation comprised 16 units of Christie Boxer 4K30 projectors.

A total of six Christie WU14K-M 3DLP® projectors were deployed for the projection mapping on the iconic Clock Tower. Titled “Long Striker,” it was an interactive projection with a digital participative element where visitors could challenge each other and become involved in lighting up the Clock Tower, while also trying to achieve the highest score. “Long Striker” was designed by interactive design agency Vendredi 4.

Christie has opened an office in Hong Kong to better serve clients and partners in the region. Located in Causeway Bay, the Christie Hong Kong office is strategically positioned to work more directly with end users to create experience strategies by leveraging on its combined in-depth knowledge of the total array of digital media and leading-edge technical skills.

Denys Lavigne, Vice President, Global Christie 360, said, “By setting up a new office in Hong Kong, we are demonstrating our strong commitment to our clients and partners in the region by adding depth to the offering and help them put together impactful projects for their business. Over the last few years, Christie has delighted customers with large-scale projection mapping, best-of-class interactive video walls and superior immersive, experiential installations in the region. I’m confident that our presence in Hong Kong can further help our industry partners be more successful in growing their businesses.”

Joe Kleimanhttp://wwww.themedreality.com
Raised in San Diego on theme parks, zoos, and IMAX films, InPark's Senior Correspondent Joe Kleiman would expand his childhood loves into two decades as a projectionist and theater director within the giant screen industry. In addition to his work in commercial and museum operations, Joe has volunteered his time to animal husbandry at leading facilities in California and Texas and has played a leading management role for a number of performing arts companies. Joe previously served as News Editor and has remained a contributing author to InPark Magazine since 2011. HIs writing has also appeared in Sound & Communications, LF Examiner, Jim Hill Media, The Planetarian, Behind the Thrills, and MiceChat His blog, ThemedReality.com takes an unconventional look at the attractions industry. Follow on twitter @ThemesRenewed Joe lives in Sacramento, California with his wife, dog, and a ghost.
Share
Facebook
Twitter
Linkedin
Email
Print
WhatsApp
Pinterest
ReddIt
Tumblr
Previous article7thSense Design Receives Two Made in the South East Awards
Next articlePolin Wins Four Brass Ring Awards at IAAPA Attractions Expo