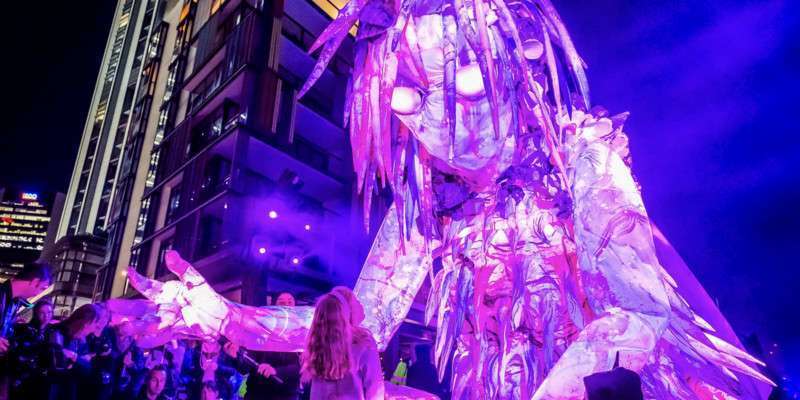 Known as The Liminal Hour, the multimedia experience was designed by the artists at Mandylights, Erth Visual & Physical Inc., Jacob Nash and James Brown. It featured a walking, 20-foot (six-meter) high, illuminated puppet named Marri Dyin wandering the site and interacting with spectators. In addition, there were several moments which incorporated the precinct’s tower lighting and audio features with integrated elements within the puppet to create a large-format spectacle.

The project was commissioned by the Barangaroo Delivery Authority to showcase a unique creative program to share the stories of the Barangaroo precinct and celebrate the femininity of the site’s namesake. Mandylights was responsible for the lighting design of Marri Dyin, including the use of a pair of Christie® Pandoras Box Widget Designer, as well as 350 internal LED lights that were wirelessly controlled and triggered from both an onsite iPad and an external lighting control system.

essential that both lighting and audio appeared organic and fluid, and transitions between cues and tracks had to be seamless regardless of where we were coming from or going to,” said Clint Dulieu, technical designer, Mandylights. “This meant that we needed much more than canned show replay, and to have a nice front-end for the cast members. We had therefore chosen the Widget Designer as it enabled me to customize a front-end interface that gave the puppeteers from Erth everything they needed.”

The first Widget Designer was used for the main control engine within the puppet itself and was installed on-board in a custom system that was built into a waterproof case. The second Widget Designer was deployed in the main control room and served as a bridge taking in cue commands from QLab show control, and outputting to the GrandMA2 lighting control system via telnet.

The results were nothing short of spectacular. Both the media and members of the public were mesmerized by the gigantic Marri Dyin walking towards spectators and interacting with them during the performances. A Vivid Sydney official who was present said he was “awestruck” when he first saw the six-meter-tall puppet, and described the glow from the LEDs, controlled by Widget Designer, akin to “the shimmering of her skin with the opalescence of oyster shells.” He added that The Liminal Hour is “the natural and collaborative way everybody came together to create this contemporary spirit,” and that the “gigantic Marri Dyin puppet aptly embodied the physicality and the philosophy of the land she inhabits.”

Singling-out the Widget Designer as one of the technology tools that contributed to The Liminal Hour’s success, Dulieu noted that it was great being able to work directly with the software support team at Christie to get solutions, fast. “Widget Designer enabled us to achieve a control solution that not only filled all of our specific requirements from the technical side, but whilst doing so did not in any way limit the artistic needs of our puppeteers which is quite the challenge.”

“At Mandylights we’re extremely happy with the outcome of this project. We have delivered an entire precinct to great response from the audiences each night with all technical elements working perfectly for us each and every night,” said Dulieu. “We also had great response from all stakeholders on the project and more importantly, the amazing feedback we’ve had from both public and press speaks for itself.”

Michael Bosworth, Executive Director for APAC, Enterprise, Christie, commented, “We’re delighted that the award-winning Christie Widget Designer has played a significant role in the staging of The Liminal Hour. We congratulate the project teams, in particular Clint and his team from Mandylights, for delivering a spectacular show with Widget Designer, which provides a complete customizable control interface solution for the end user that no other systems on the market can offer.”

Joe Kleimanhttp://wwww.themedreality.com
Raised in San Diego on theme parks, zoos, and IMAX films, InPark's Senior Correspondent Joe Kleiman would expand his childhood loves into two decades as a projectionist and theater director within the giant screen industry. In addition to his work in commercial and museum operations, Joe has volunteered his time to animal husbandry at leading facilities in California and Texas and has played a leading management role for a number of performing arts companies. Joe previously served as News Editor and has remained a contributing author to InPark Magazine since 2011. HIs writing has also appeared in Sound & Communications, LF Examiner, Jim Hill Media, The Planetarian, Behind the Thrills, and MiceChat His blog, ThemedReality.com takes an unconventional look at the attractions industry. Follow on twitter @ThemesRenewed Joe lives in Sacramento, California with his wife, dog, and a ghost.
Share
Facebook
Twitter
Linkedin
Email
Print
WhatsApp
Pinterest
ReddIt
Tumblr
Previous articleNew stage show announced for 2019 at Tokyo DisneySea
Next articleColumbus Zoo and Aquarium deploys Dante to integrate multiple audio systems from different vendors