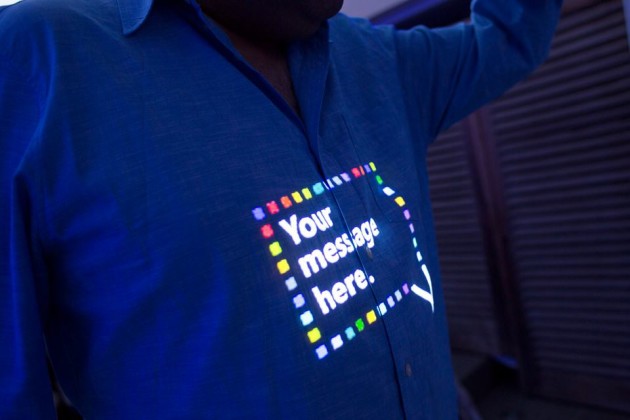 Housed in a white-tented pavilion on the beach, Christie and Microsoft displayed two projects designed to show how Kinect and Christie projectors can be combined to inspire a creative space. Using Microsoft Kinect and a Christie Mirage HD14K-M projector, the first project, dubbed “Light Marketing,” warped images onto visitors in real time as they entered and moved around the pavilion.

“Kinect is pretty much a room scale technology,” explained Rick Barraza, design strategy and creative engineering, Partner Catalyst Group, Microsoft. “It tracks up to six people at 30 frames a second and with 25 points of articulation on a person’s joints. It is about movements in space. We’re able to turn people into living billboards.”

“‘Light Marketing’ can be used to show real-time content on people for shopping, concerts or installations and the point was to make it seem like a magical experience,” added Chad Faragher, senior product developer, Software, Christie.

The second project – “Light Mural” – was a 10-foot by 4-foot animated scene of beach life featuring Kinect and one Christie DWU951-Q projector with an ultra-short throw lens. When touched, the interactive mural sensed depth changes and came to life with pop-up images. 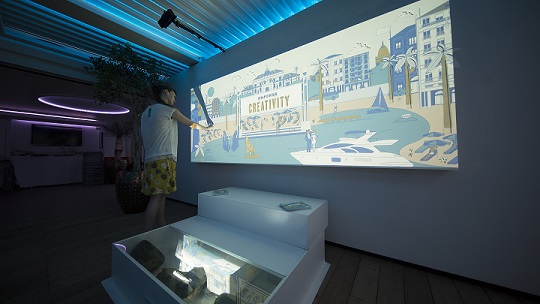 “We were interested in mixing Kinect with projection to create a perception-based experience,” commented Barraza. “When you mix projectors with a camera that can see and understand reality, dumb light becomes smart light, which is why I love this partnership with Christie.”

Christie engineers spent three months working with Microsoft on the “Light Marketing” and “Light Mural” projects and overcame numerous environmental challenges including hot weather, high ambient light, salty air, no roof and a wooden floor that vibrated when walked on.

Overall, the projects were a success for both Microsoft and Christie. “It was great working with Christie because they try to explore what projection can do. They’re very creative people and there is a big tradition in cinema of how technology is used to tell stories better. The project was a fascinating marriage between technology and creativity; engineers worked to overcome all these challenges and the artists providing content were able to use technology in a way that could inspire storytellers in museums, theme parks and retail spaces,” Barraza concluded.

Joe Kleimanhttp://wwww.themedreality.com
Raised in San Diego on theme parks, zoos, and IMAX films, Joe Kleiman would expand his childhood loves into two decades as a projectionist and theater director within the giant screen industry. In addition to his work in commercial and museum operations, Joe has volunteered his time to animal husbandry at leading facilities in California and Texas and has played a leading management role for a number of performing arts companies. Joe has been News Editor and contributing author to InPark Magazine since 2011. HIs writing has also appeared in Sound & Communications, LF Examiner, Jim Hill Media, and MiceChat. His blog, ThemedReality.com takes an unconventional look at the attractions industry. Follow on twitter @ThemesRenewed Joe lives in Sacramento, California with his fiancé, two dogs, and a ghost.
Share
Facebook
Twitter
Linkedin
Email
Print
WhatsApp
Pinterest
ReddIt
Tumblr
Previous articleInfoComm MEA to Become Standalone Show in 2016
Next articleSeaWorld’s Christmas Celebration Returns to Orlando