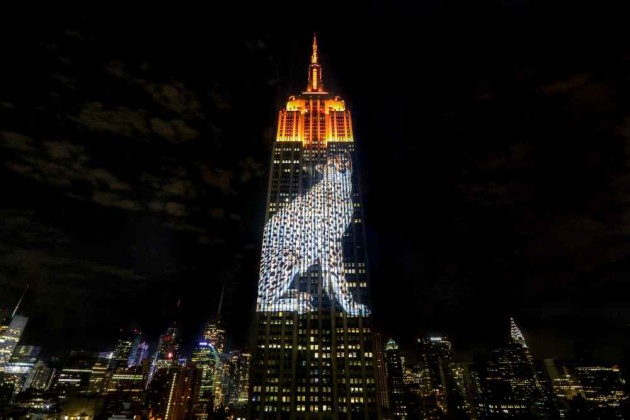 Cypress, CA, USA (August 26, 2015) – Powered by 26 Christie Roadster HD20K-J and 12 Christie Roadster S+22K-J projectors, provided by Nationwide Video, New York City’s Empire State Building was the setting for a stunning projection mapping display highlighting the plight of many animals facing extinction. The massive display was a collaboration between Travis Threlkel, chief creative officer and co-founder of Obscura Digital, and Oscar winning filmmaker and photographer Louie Psihoyos, executive director of Oceanic Preservation Society. It was the fruition of a four-year struggle to bring attention to some of the world’s most endangered animals. The animated light show measured 375 feet high and 186 feet wide and covered 33 floors of the city’s famous landmark.

The show, “Projecting Change: The Empire State Building,” presented a veritable “Noah’s Ark” of endangered animals, according to Psihoyos. Using photography from his colleagues at National Geographic, he produced a looping reel that included manta rays, birds, reptiles, lions, and even a gorilla that “climbed” to the top of the building.  The multimedia production, which ran from 9 p.m. through midnight on Saturday, August 1, proved to be a “show stopper” on the streets of the city. It is now a hit on YouTube, where the video has already garnered more than 100,000 views. 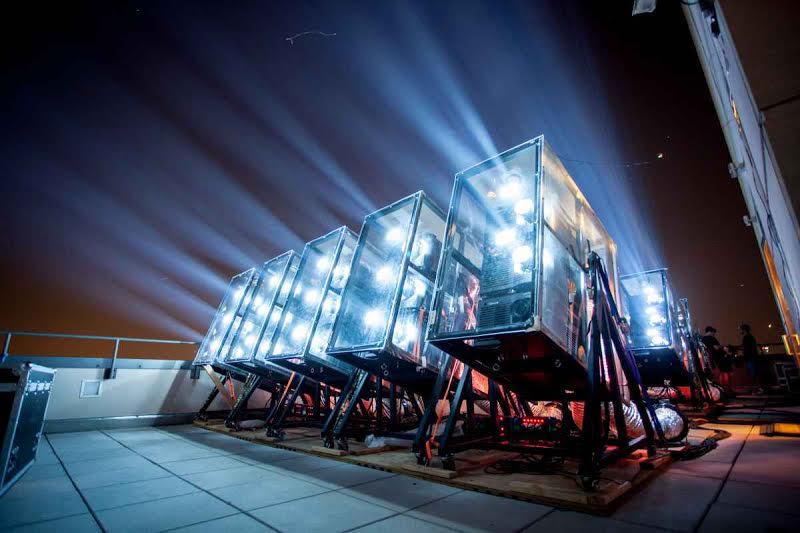 “We call projection mapping presentations of this magnitude, ‘weapons of mass instruction,’ said Threlkel, who worked closely with Psihoyos to stage “the most dramatic” event possible to bring attention to the world’s endangered animals. “It took us four years to finally bring Louie’s extraordinary vision to life, but we only had three hours to tell his story. As such, there was no second chance. We needed projection technology of the highest quality, performance and reliability, and for me, the only choice was Christie.”

“Christie is proud to have been selected for this extraordinary undertaking, and for the trust Mr. Threlkel and Mr. Psihoyos placed in our products,” said Kathryn Cress, vice president, global and corporate marketing, Christie. “Projection mapping on this scale shows the impact that images can have, and Christie is excited to have been a part of helping Obscura and the Oceanic Preservation Society project their message to the world.”

Joe Kleimanhttp://wwww.themedreality.com
Raised in San Diego on theme parks, zoos, and IMAX films, InPark's Senior Correspondent Joe Kleiman would expand his childhood loves into two decades as a projectionist and theater director within the giant screen industry. In addition to his work in commercial and museum operations, Joe has volunteered his time to animal husbandry at leading facilities in California and Texas and has played a leading management role for a number of performing arts companies. Joe previously served as News Editor and has remained a contributing author to InPark Magazine since 2011. HIs writing has also appeared in Sound & Communications, LF Examiner, Jim Hill Media, The Planetarian, Behind the Thrills, and MiceChat His blog, ThemedReality.com takes an unconventional look at the attractions industry. Follow on twitter @ThemesRenewed Joe lives in Sacramento, California with his wife, dog, and a ghost.
Share
Facebook
Twitter
Linkedin
Email
Print
WhatsApp
Pinterest
ReddIt
Tumblr
Previous article
Whitewater Products Featured at Three Aquatics International Dream Design Winners
Next article
Wanda Chairman Wan Jinalin Announces Company’s Tourism Strategy