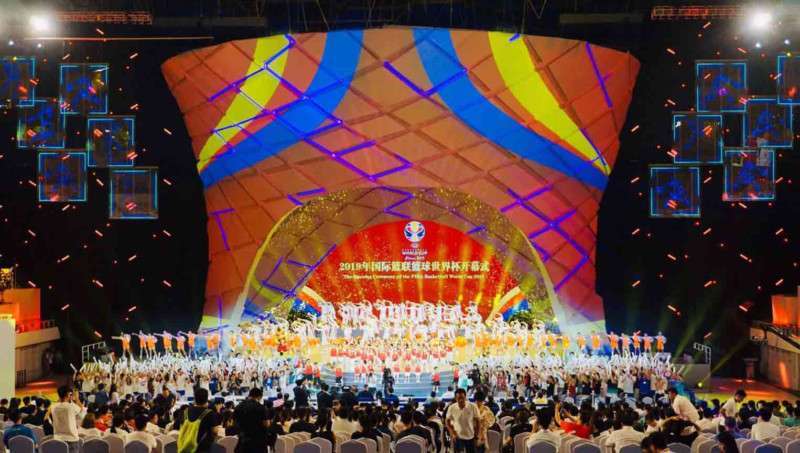 Dai-yuan Wang, CEO and Chief Technology Officer, PDR China, said, “We are very honored to be granted the opportunity to provide the show control systems for this prestigious international tournament dubbed the ‘Olympics’ for basketball. The Christie Pandoras Box, with its full-feature software set and powerful hardware platform, is the ideal system to generate maximum creative results, and deliver a great visual experience to live audiences and television viewers watching this event from all over the world.”

According to Wang, the show segment of the opening ceremony took a year to prepare and his team had worked very closely with the organizing committee throughout this duration.

“We managed to identify the ideal display configurations after many rounds of rehearsals – by deploying 15 high-brightness projectors for projections on the outer structure of the ‘meshed basket’, and another six projectors for projections on the inner structure. Together with the accurate and powerful compositing, warping and rendering capabilities of the Pandoras Box system, the visuals are perfectly integrated with the meshed basket edifice to deliver fantastic visuals that complemented the live performers onstage,” Wang noted.

Wang added, “We are very satisfied with the outcome as the opening ceremony was executed without a hitch. For me, this is the ideal conclusion to this major project that we have been working so hard for over a year. The performance of the Pandoras Box has been amazing, and it really inspires us to create something even beyond our own expectations. No wonder it has been used extensively in various television programs produced by China Central Television (CCTV).”

Michael Bosworth, Executive Director, Head of Enterprise for APAC, Christie, commented, “The Christie Pandoras Box is perfectly suited for creating stunning presentations and interactive installations for various applications, including cultural assets development, location-based entertainment and sporting events like the FIBA Basketball World Cup opening ceremony. With its on-site 3D rendering, composition and editing capabilities, the Pandoras Box is trusted by content creators, rental stagers and projection designers to deliver some of the most spectacular multi-media presentations around the world.”

This is the 18th edition of the FIBA Basketball World Cup and the first time it has ever been held in China. The games took place in eight cities – Beijing, Foshan, Wuhan, Shenzhen, Dongguan, Nanjing, Shanghai and Guangzhou – across five provinces.

Joe Kleimanhttp://wwww.themedreality.com
Raised in San Diego on theme parks, zoos, and IMAX films, InPark's Senior Correspondent Joe Kleiman would expand his childhood loves into two decades as a projectionist and theater director within the giant screen industry. In addition to his work in commercial and museum operations, Joe has volunteered his time to animal husbandry at leading facilities in California and Texas and has played a leading management role for a number of performing arts companies. Joe previously served as News Editor and has remained a contributing author to InPark Magazine since 2011. HIs writing has also appeared in Sound & Communications, LF Examiner, Jim Hill Media, The Planetarian, Behind the Thrills, and MiceChat His blog, ThemedReality.com takes an unconventional look at the attractions industry. Follow on twitter @ThemesRenewed Joe lives in Sacramento, California with his wife, dog, and a ghost.
Share
Facebook
Twitter
Linkedin
Email
Print
WhatsApp
Pinterest
ReddIt
Tumblr
Previous articleAlterface enters technology partnership with AVANZA on ScreenPLAY interactive technology
Next articleExecutive management changes announced for Disneyland and Walt Disney World Resorts