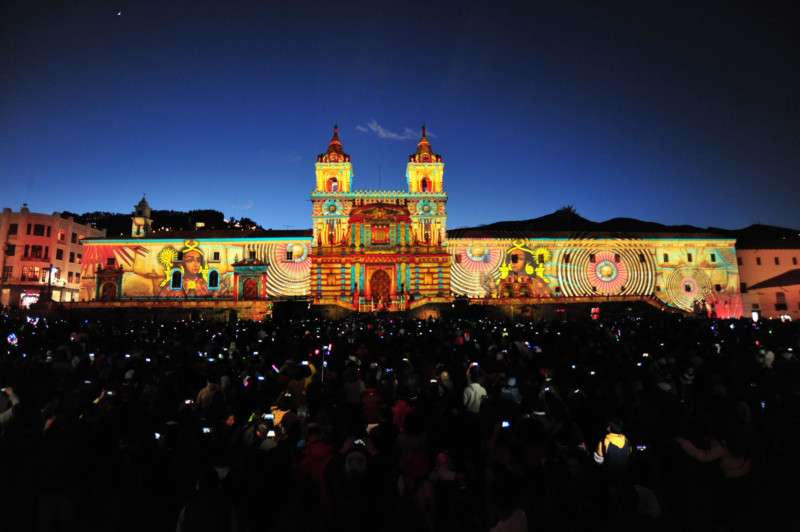 Christie® has announced that for the third year running it played a key role at the Fiesta de la Luz in Quito (Ecuador), Latin America’s biggest light festival. Fifteen Christie Roadster WU20K-J projectors were the driving force behind three spectacular mapping projections on the facades of the city’s cathedral and the churches of Santo Domingo and San Francisco.

Organised by the Quito City Council, this is the third year of the light festival whose mission is to artistically light up the city’s main historic buildings. This year coincided with the 40th anniversary of the declaration of Quito as a UNESCO World Heritage Site and the event attracted 2.5 million people who strolled through the streets of the old quarters of the city over the course of five nights.

The Ecuadorian rental and staging company 3Laser was commissioned with organizing the festival’s mapping projections thanks to its reputation as the country’s leading name for the production of large-scale projections.

Ángel Cuesta, director of 3Laser, explained some of the peculiarities of Quito when it comes to staging open-air projections: “Unlike other cities in Ecuador where we have done mappings before, the altitude of Quito, at a height of 2,800 meters above sea level, coupled with the high contamination, creates very specific conditions.

“We carried out tests using projectors from other brands with 18,000 lumens and WUXGA resolution, and the lamps only lasted half the length because they didn’t have the proper filters required; all they had were optical filters. That means that the pollution goes straight to the lamp bulb which produces a kind of black veil over the glass, and deposits dust on the reflector,” said Questa.

He added: “In addition, at an altitude of 2,800 meters, the ventilators spin faster and the air is thinner, and that makes the sensors of those projectors mistakenly indicate that the optical filter is covered. So, in order to work, you have to take off the filter and that has the knock-on effect of reducing the lens life because of dust.”

“But none of that happens with Christie,” Cuesta continued. “Its projectors finish one show and they are immediately ready for the next, time and time again. All we have to do is change the air filter. In the 156 mappings we have done with Christie projectors, they have always operated as if they were brand new. And some of them have already clocked up over 4,000 hours of use. Over the last eighteen years we have used projectors from all brands, but Christie beats them all hands down in that regard.”

The director of 3Laser also spoke about the features he likes best about Christie 3DLP ® projectors: “Their weight and size are perfect for fitting them into awkward places, and then there is the added bonus that they can operate in portrait mode. At the same time, the image and the color remain stable over time. On top of that, they are really quick and easy to set up.”

The projections during the Fiesta de la Luz were a resounding success and were highly acclaimed by both public and press alike. “There is no margin of any kind of post-production in live events. They either work or they don’t, there is no middle ground. And, in this case, once again, the Christie

Joe Kleimanhttp://wwww.themedreality.com
Raised in San Diego on theme parks, zoos, and IMAX films, InPark's Senior Correspondent Joe Kleiman would expand his childhood loves into two decades as a projectionist and theater director within the giant screen industry. In addition to his work in commercial and museum operations, Joe has volunteered his time to animal husbandry at leading facilities in California and Texas and has played a leading management role for a number of performing arts companies. Joe previously served as News Editor and has remained a contributing author to InPark Magazine since 2011. HIs writing has also appeared in Sound & Communications, LF Examiner, Jim Hill Media, The Planetarian, Behind the Thrills, and MiceChat His blog, ThemedReality.com takes an unconventional look at the attractions industry. Follow on twitter @ThemesRenewed Joe lives in Sacramento, California with his wife, dog, and a ghost.
Share
Facebook
Twitter
Linkedin
Email
Print
WhatsApp
Pinterest
ReddIt
Tumblr
Previous article
Polin Waterparks’ attractions earn nine European Star Awards
Next article
Former San Antonio Zoo director Steve McCusker receives Marlin Perkins Award from AZA