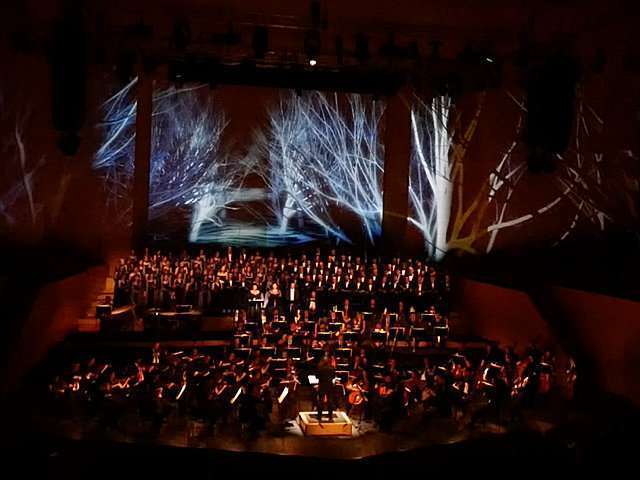 At the time of its premiere, Verdi’s Requiem was criticized by some as being too operatic in style for the religious subject matter. Both musically and in the ecclesiastical décor designed for the performance.  According to Gundula Kreuzer, “Most perceived a schism between the religious text (with all its musical implications) and Verdi’s setting.” Barcelona Symphony Orchestra (OBC) commissioned company Slidemania to reimagine a visual setting for its performance of Verdi’s opera at the L’Auditori in Barcelona and help bring audiences closer to the emotional context of the work.​

“OBC and L’Auditori, home of the Barcelona Symphony Orchestra, wanted to add a new dimension to its performance of Verdi’s Requiem that would make it much more than a simple concert. To this end, it wished to make the most of new technologies, although of course remaining absolutely respectful with the primacy of the music over the projection”, explained Fausto Morales Gil, Slidemedia’s art director. “So we immediately got down to work and started developing a projection that would match the 90 minutes or so the composition lasts.”

Silence and Christie BoldColor brings Verdi’s Requiem to life. from Christie on Vimeo.

The importance of silence.

The blending projection covered the whole of the back wall of the auditorium (behind the orchestra and choir) as well as part of the side walls and boxes, which the Slidemedia team had to mask in order not to dazzle the audience. Between the side and front walls, the surface area covered was around 70 by 12 metres.

Of course, an indispensable prerequisite for the projectors was that they would produce no noise, given that silence is absolutely essential in this type of event. For this reason Slidemedia chose the laser phosphor models from the Christie HS Series, which have a noise level of just 39 db. “The truth is that the low noise passed the test of such a highly demanding and discerning public as an opera audience”.

The central projector was located in the middle of the auditorium, more specifically in a cabin fitted out for this purpose, with a 2.0 optical lens and a throw distance of 41 metres. The other two side projectors were located on the first gallery, where the images were conceived to create an immersive sensation. The lens used in this case were 1.2 and the throw distance was 38 metres.

One of the biggest challenges for Slidemedia was the architectural features of the space. As Fausto Morales clarified, “the auditorium has some highly unusual features, with some planes facing in different directions, plus large structures for the lighting and audio systems. In addition, the walls are covered with satin-finish wood. We had to carry out a whole series of calculations during rehearsals to ensure that the projection would be perfect and we needed projectors with sufficient power like Christie to ensure the ideal lighting.”

Meanwhile, Jorge Vilaplana, head of AV/Pro Products at Charmex, claimed: “The projectors from the HS series are the ideal solution to achieve a high level of brightness and a low level of noise. They also afford incredible colour thanks to BoldColor technology.”

Fausto Morales, from Slidemedia, also underscored the BoldColor technology built into these projectors, which guarantees accurate colour reproduction and saturation. “This technology is ideal for our kind of work, which is generally based on spectacular images and special effects. We create our contents mainly digitally and with 3D animation and motion graphic programs, which means that colour saturation gives our images a force and accuracy when compared with what you see on the monitors during editing, which is what we are interested in.”

The importance of support

The contents were powered from a MacPro 2016 with 12Gb graphics, 32Gb RAM and various outputs to Full HD. The software used was Millumin 2, a program with manifold functions, including blending and warping, which makes it ideal for mappings. The aspect ratio was 48:9 and the resolution used was 5760 x 1200 pixels.

Fausto Morales also wanted to make an express mention for the support from Christie and its partner Charmex in this project. “The support was absolutely crucial, and without it we would not have been able to carry out this show with the quality demanded by all parties involved. We have had a very close and productive relationship with Charmex for many years now. Christie has demonstrated great interest in our work, and that is something we value highly. In our studio in Sabadell (Barcelona), where a good sense of humour and creativity are the order of the day, we consider Christie to be the Rolls Royce of projectors, and so we are honoured to be able to collaborate together and hope to work with them again very soon.”