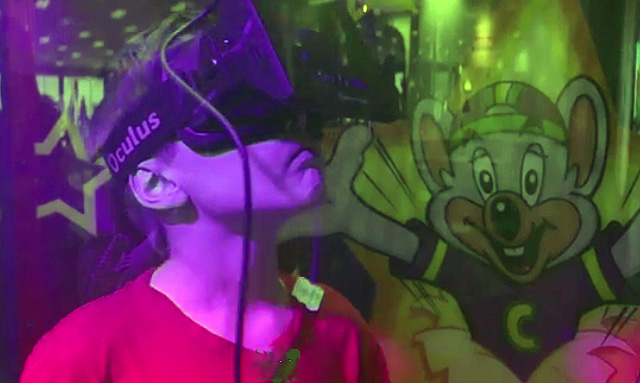 [quote]Oculus Rift technology is the next frontier in the gaming industry, and we’re thrilled to be able to say it’s part of the Chuck E. Cheese’s lineup.” — Roger Cardinale, President of CEC Entertainment[/quote]
Dallas, TX, USA (May 20, 2014) / PRNewswire / — Chuck E. Cheese’s, the family entertainment leader and number one kid-friendly restaurant, is adding the hottest ticket in gaming to its birthday party packages using the groundbreaking technology Oculus Rift in the Ticket Blaster. “Chuck E. Cheese’s Virtual Ticket Blaster Experience” will make its way to select markets beginning today in Dallas and on to San Diego and Orlando later this month.

“Kids today have unprecedented access to game consoles and tablets,” said Roger Cardinale, president, CEC Entertainment, Inc. “Our challenge is to deliver an experience not available at home, and there is no doubt virtual reality does just that.”

Birthday parties booked during the six–week test in the three markets will offer the Birthday Star a turn in the virtual Ticket Blaster. The headset uses 360–degree head-tracking technology and features a 3D view so users feel as though they are inside the Ticket Blaster with Chuck E. During the experience, the headset will register the number of tickets collected, which will be fully redeemable at the merchandise counter.

The first store equipped with “Chuck E. Cheese’s Virtual Ticket Blaster Experience” will be at 13364 Montfort Drive in Dallas. Later this month will be 15 more locations in the Dallas–Fort Worth area, six in Orlando, Fla., and eight in San Diego, Calif.

“We believe that virtual reality eventually will be as popular as our handheld devices,” said Reel FX founder and Executive Creative Director Dale Carman. “It’s a game–changer, and we’re investing incredible time and talent into developing content for the Oculus Rift.”

Reel FX was an early adopter and supporter of Oculus Rift, dating back to the technology company’s initial development and fundraising push through its Kickstarter campaign in 2012. Facebook acquired Oculus VR in March 2014 for $2 billion.

Joe Kleimanhttp://wwww.themedreality.com
Raised in San Diego on theme parks, zoos, and IMAX films, InPark's Senior Correspondent Joe Kleiman would expand his childhood loves into two decades as a projectionist and theater director within the giant screen industry. In addition to his work in commercial and museum operations, Joe has volunteered his time to animal husbandry at leading facilities in California and Texas and has played a leading management role for a number of performing arts companies. Joe previously served as News Editor and has remained a contributing author to InPark Magazine since 2011. HIs writing has also appeared in Sound & Communications, LF Examiner, Jim Hill Media, The Planetarian, Behind the Thrills, and MiceChat His blog, ThemedReality.com takes an unconventional look at the attractions industry. Follow on twitter @ThemesRenewed Joe lives in Sacramento, California with his wife, dog, and a ghost.
Share
Facebook
Twitter
Linkedin
Email
Print
WhatsApp
Pinterest
ReddIt
Tumblr
Previous articleHalloween Expo Europe Hosting Haunt Industry Education Event in UK
Next articleCity of Dreams Manila and DreamWorks Animation Partner for Innovative Digital “Edutainment” Play Center