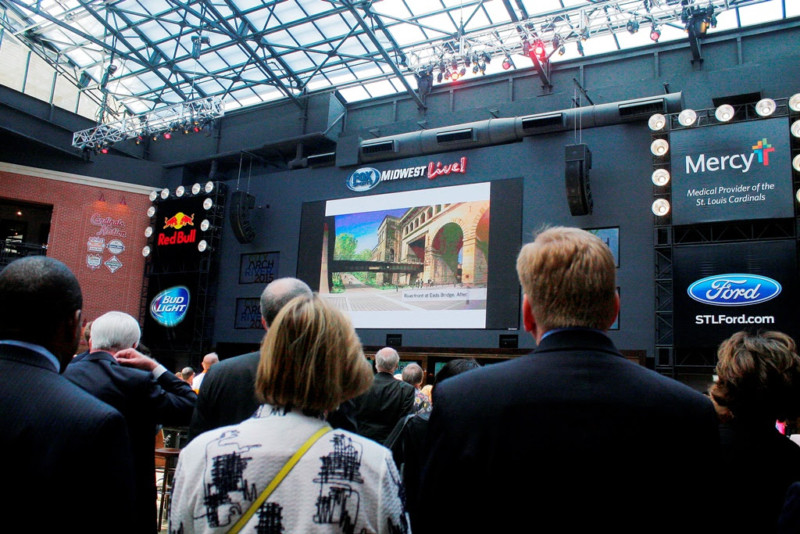 [quote]This is our chance to be part of creating an iconic place for our international icon.” — sports broadcaster Joe Buck[/quote]

St. Louis, MO, USA — Leaders from CityArchRiver 2015 Foundation announced at a public rally that they have raised more than $178.2 million in private funding, or 71% of their $250 million goal, to help complete a transformational renovation of the Gateway Arch grounds and its surroundings. Private funds to date have been contributed primarily from corporations, foundations and individual donors.

In announcing this accomplishment, David Farr, Chairman and CEO of Emerson Electric, thanked the lead donors, noting that “the generous philanthropic character of the St. Louis region is known and respected throughout the country and boldly demonstrated once again in the tremendous leadership support of CityArchRiver 2015.”

Lead gifts include a match extended to the campaign by the Taylor Family, owners of Enterprise Holdings, which operates the Enterprise Rent-A-Car, National Car Rental and Alamo Rent A Car brands. Their support is credited with helping CityArchRiver 2015 Foundation raise more than $73 million since mid-November 2013.  Carolyn Kindle, Vice President and Executive Director, Enterprise Holdings Foundation, and a member of the CityArchRiver 2015 Foundation Board shared the exciting news of the challenge match.

“Our family is proud to participate in this initiative, because CityArchRiver is all about the future of the region. We can all play a role in this project’s success,” Kindle said, adding that the challenge match had resulted in 100 new or increased gifts to the campaign.

The CityArchRiver 2015 Foundation announced that lead gifts of $10 million have been made by the Emerson Charitable Trust and Monsanto Company.  Other lead donors include the McDonnell Family, The Boeing Company, Edward Jones, Express Scripts, The William T. Kemper Foundation – Commerce Bank, Trustee and Pinnacle Entertainment, Inc.

Twenty-six additional donors have provided support of $1 million or above.

Foundation Board member, David Peacock, who, along with Danny Ludeman, helped lead the quiet phase of the fundraising campaign, extended his appreciation to the campaign donors and leadership team.  “The Foundation and its partners’ success in realizing the vision for CityArchRiver will result in an exciting community venue of international significance that is vibrant with new programs and events, welcoming and well supported now and for decades to come. While progress to date has been incredible, there is still much to be done.”

Following today’s announcement of the quiet phase fundraising accomplishments, the Foundation is now taking its fundraising efforts to the public to help reach the remaining goal of $72 million. People interested in being part of the transformation can go to www.cityarchriver.org/donate to learn more.

The Foundation also announced that Chairman and CEO of Express Scripts, Inc., George Paz and his wife Melissa, who is also a Foundation board member, are chairing the public phase of the CityArchRiver 2015 Campaign.  George Paz asked for the community’s support in helping CityArchRiver 2015 Foundation achieve the ambitious goal emphasizing that today’s rally announcement celebrates accomplishments to date and presents the fundraising work to be completed by October 28, 2015, the 50th anniversary of the completion of the Gateway Arch and the target completion date of the private fundraising campaign.

“CityArchRiver 2015 offers all of us a once-in-a-lifetime opportunity to be part of the future of this region,” said Paz.  “Your support of this campaign is critical and will make the difference in CityArchRiver’s success.”

Broadcaster and St. Louisan Joe Buck emceed the rally and talked about what completion of this project will mean for the region.

“The Arch is the undeniable symbol of our region to the world.  To St. Louisans, it means home,” said Buck.

CityArchRiver 2015 will create a seamless visitor experience from the city, through our national park to the Mississippi River, providing visitors with a more vibrant and safer place to visit, enjoy, and return. CityArchRiver 2015 is a partnership including the National Park Service, Missouri Department of Transportation, Great Rivers Greenway District, City of St. Louis, Bi-State Development Agency, CityArchRiver 2015 Foundation and many other organizations.

“Once completed, CityArchRiver improvements will have an amazing impact on our region’s economy,” said Rodney Crim, president of St. Louis Economic Development Partnership. “It will create an additional economic impact of $367 million each year and create 4,400 permanent jobs, the equivalent of an additional St. Louis Cardinals baseball season each year.”

Joe Kleimanhttp://wwww.themedreality.com
Raised in San Diego on theme parks, zoos, and IMAX films, InPark's Senior Correspondent Joe Kleiman would expand his childhood loves into two decades as a projectionist and theater director within the giant screen industry. In addition to his work in commercial and museum operations, Joe has volunteered his time to animal husbandry at leading facilities in California and Texas and has played a leading management role for a number of performing arts companies. Joe previously served as News Editor and has remained a contributing author to InPark Magazine since 2011. HIs writing has also appeared in Sound & Communications, LF Examiner, Jim Hill Media, The Planetarian, Behind the Thrills, and MiceChat His blog, ThemedReality.com takes an unconventional look at the attractions industry. Follow on twitter @ThemesRenewed Joe lives in Sacramento, California with his wife, dog, and a ghost.
Share
Facebook
Twitter
Linkedin
Email
Print
WhatsApp
Pinterest
ReddIt
Tumblr
Previous article
100th Cruden Racing Simulator to be Displayed at Asian Attractions Expo
Next article
KIngs Island’s Historic Scrambler Celebrates 45 Years of Spins and Smiles