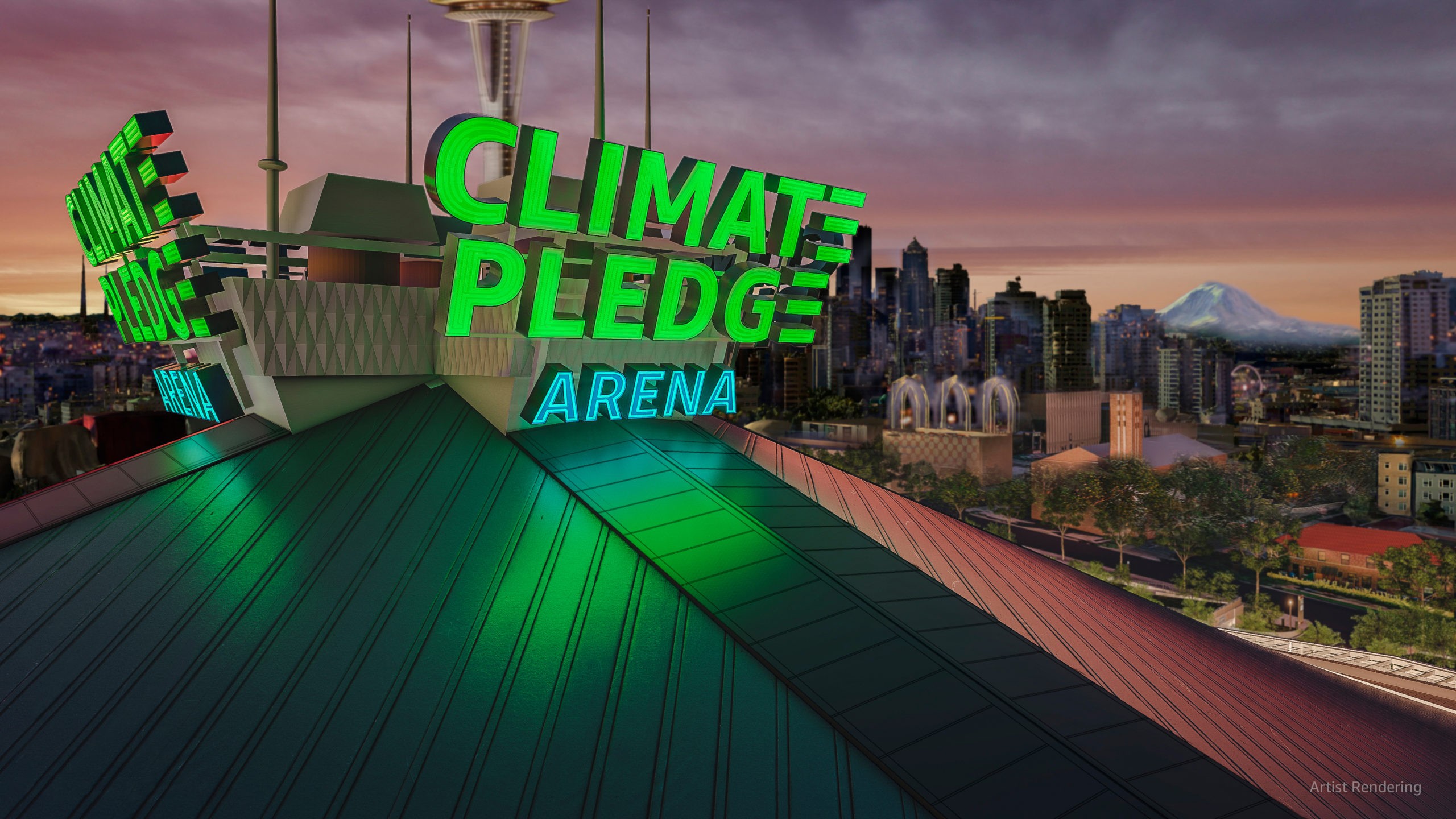 Amazon has announced that it has secured the naming rights to the new home of Seattle’s NHL team and WNBA’s Seattle Storm, and is calling it Climate Pledge Arena rather than the name of the company. In 2019, Amazon and Global Optimism announced The Climate Pledge, which calls on signatories to be net zero carbon across their businesses by 2040—a decade ahead of the Paris Agreement. With significant investment from Amazon and Oak View Group, the venue is expected to be the first net zero carbon certified arena in the world and set a new sustainability bar for the sports and events industry.

“We’ve secured naming rights to the historic arena previously known as KeyArena. Instead of naming it after Amazon, we’re calling it Climate Pledge Arena as a regular reminder of the importance of fighting climate change,” said Jeff Bezos, Amazon founder and CEO. “We look forward to working together with Oak View Group, a new Climate Pledge signatory, and NHL Seattle to inspire global climate action.”

“There is no question that the state of our planet is a critical issue for all of us,” said Tim Leiweke, CEO, Oak View Group. “We have a responsibility to future generations to try to leave them with a better world. We love that Amazon is using its naming rights for a cause we care deeply about—this partnership is a visionary step for the facilities business and sport and music industries. Our goal is to be the most progressive, responsible, and sustainable venue in the world. It is not just about one arena—it’s a platform for us to step up and heal our planet.”

Highlights of the arena partnership include:

• Arena will have all-electric operations and be powered with 100% renewable electricity, both from on-site solar panels and off-site renewable energy. Events at the arena will be made fully net zero carbon through investments in forestry projects with organizations such as The Nature Conservancy that will sequester any remaining carbon emissions from arena operations.

• Carbon emissions and sustainability performance of the arena and all events will be measured and publicly disclosed.

• All operations and events at the arena will be ‘zero waste’ with durable and compostable containers. A minimum of 95% of all arena waste will be diverted from landfills on a weight basis.

• Arena will use reclaimed rainwater in the ice system to create the greenest ice in the NHL.

• Original 44-million-pound roof from the arena will be reused in construction to significantly reduce the embodied carbon of the building.

• At least 75% of the arena’s food program will be sourced locally on a seasonal basis to support regional farmers and producers, and all viable unused food from events will be donated to local community food programs.

• NHL Seattle and WNBA Storm tickets will double as free public transit passes to promote use of public transportation for attendees, including on the refurbished Seattle Monorail.

“Climate Pledge Arena will set a new sustainability standard for sports and event spaces around the world. I commend the commitments from Amazon and Oak View Group to develop this one-of-a-kind venue and inspire climate action,” said Jason F. McLennan, Founder of the International Living Future Institute and CEO of McLennan Design. “The group’s innovative approach and sustainability mindset – embodied by naming the arena after The Climate Pledge – will provide a green, world-class event space at Seattle’s City Center for the region to enjoy for years to come.”

“We have always set out to create the best home ice advantage; now we are innovating to create ice from reclaimed rainwater and the greenest ice in the country,” said Tod Leiweke, CEO, NHL Seattle. “This is going to be the best arena in the NHL and we’re proud that there will be many opportunities for our fans to make a difference nightly. This is truly remarkable and a testament to David Bonderman and our leadership.

The 18,100-seat multi-purpose venue located at Seattle Center is expected to host 200 events each year, including NHL Seattle, three-time WNBA world champion Seattle Storm, live music and entertainment from the world’s biggest stars, and City of Seattle community events. It is currently undergoing a transformation to construct a brand new arena under the landmark Paul Thiry-designed roof. To learn more about The Climate Pledge and Climate Pledge Arena, visit www.TheClimatePledge.com and www.ClimatePledgeArena.com.

Joe Kleimanhttp://wwww.themedreality.com
Raised in San Diego on theme parks, zoos, and IMAX films, InPark's Senior Correspondent Joe Kleiman would expand his childhood loves into two decades as a projectionist and theater director within the giant screen industry. In addition to his work in commercial and museum operations, Joe has volunteered his time to animal husbandry at leading facilities in California and Texas and has played a leading management role for a number of performing arts companies. Joe previously served as News Editor and has remained a contributing author to InPark Magazine since 2011. HIs writing has also appeared in Sound & Communications, LF Examiner, Jim Hill Media, The Planetarian, Behind the Thrills, and MiceChat His blog, ThemedReality.com takes an unconventional look at the attractions industry. Follow on twitter @ThemesRenewed Joe lives in Sacramento, California with his wife, dog, and a ghost.
Share
Facebook
Twitter
Linkedin
Email
Print
WhatsApp
Pinterest
ReddIt
Tumblr
Previous articleMoreys’ Piers to reopen July 2
Next articleVietnam’s Hoiana Suncity employs HARMAN Professional for AV and background music