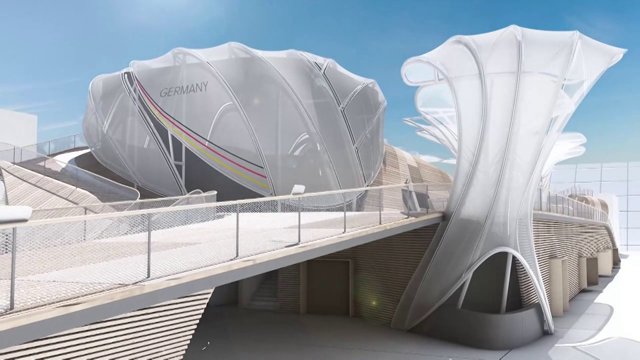 [quote]EXPOs do not offer a short-term ‘return on investment’. They are always an investment in the medium- and long-term future of a whole country.” — Dietmar Schmitz, Commissioner General of the German Pavilion[/quote]

Frankfurt, Germany — The Federal Ministry of Economics and Technology (BMWi) and the selected consortium of Milla & Partner / Schmidhuber / Nüssli presented their approaches to content and the architectural design of the German Pavilion at a press conference in the Portalhaus at Messe Frankfurt on May 7, 2014.

“The German Pavilion is very clearly orientated towards the theme of EXPO 2015 – Feeding the Planet – Energy for Life,” said Dietmar Schmitz, Commissioner General of the German Pavilion and Head of the Division for Trade Fair Policy and EXPO Participation at the BMWi. “As a pioneer in the areas of environmental protection and the transition to the use of renewable energies, Germany is a proponent of progressive thinking and greater awareness of the forces of nature as important sources of our food. The pavilion will highlight the economic performance and expertise of our country in finding solutions,” continued Schmitz. He added that the German government is particularly interested in presenting an overview of current research and opportunities as a package that will help to define a future.

The best teams from Germany formed consortia to develop ideas and possible designs for the German Pavilion in Milan. The quality and depth of preparation evident in the papers submitted showed a high degree of identification with the theme of EXPO 2015. “In the end, the specially assembled selection committee, which has extensive experience in the EXPO business had to make a decision,” said Schmitz. He noted that the overall concept developed by the selected consortium of Milla & Partner / Schmidhuber / Nüssli is a thoroughly harmonious package, which communicates and elegantly interweaves the content and architecture through appropriate messages. Schmitz also expressed his sincere thanks to all those who participated in the selection process for their passionate commitment.

This is the second time that the three consortium partners have worked together on a project in this constellation. They previously designed the award-winning German pavilion “balancity”, one of the most popular attractions at EXPO 2010 in Shanghai.

“The key features of the concept are that it abandons the usual pathways that guide visitors around the pavilion and closely interlinks the presentation of space and content,” explained Lennart Wiechell from Schmidhuber. “With its open landscape level, which visitors are free to walk around and explore, the German Pavilion is not an example of representative architecture but rather a place for encounter and exchange and therefore the programmatic implementation of fields of ideas.”

“We have not just reached an important milestone on the road to Milan,” emphasises Wolfgang Marzin, CEO of Messe Frankfurt. “From today, the general public will also have a specific image in their minds when the German Pavilion at EXPO 2015 in Milan is mentioned.” Messe Frankfurt is responsible for the organisation and operation of the German Pavilion at the World Exposition.

Both Schmitz and Marzin emphasised the long tradition of close commercial and cultural relationships between Germany and Italy. They highlighted the fact that EXPO 2015 will not only enrich the understanding between peoples but that it should also be seen as an opportunity for further economic development, which simultaneously sets new standards for a shared European future.

Peter Redlin from Milla & Partner believes actively involving visitors is the key to achieving these aims. “We want to communicate the themes of the exhibition in the German Pavilion in a fun and entertaining way. We want to motivate people to join in, inspire them to take matters into their own hands and thus make a contribution of their own towards fulfilling the EXPO motto.”

The following video is in German only:

SPECIAL THANKS TO JAMES OGUL FOR BRINGING THE GERMAN PAVILION VIDEO TO OUR ATTENTION.  READ HIS NEWEST CONTRIBUTION TO INPARK, “EXPO EXPLANATION” HERE

Joe Kleimanhttp://wwww.themedreality.com
Raised in San Diego on theme parks, zoos, and IMAX films, Joe Kleiman would expand his childhood loves into two decades as a projectionist and theater director within the giant screen industry. In addition to his work in commercial and museum operations, Joe has volunteered his time to animal husbandry at leading facilities in California and Texas and has played a leading management role for a number of performing arts companies. Joe has been News Editor and contributing author to InPark Magazine since 2011. HIs writing has also appeared in Sound & Communications, LF Examiner, Jim Hill Media, and MiceChat. His blog, ThemedReality.com takes an unconventional look at the attractions industry. Follow on twitter @ThemesRenewed Joe lives in Sacramento, California with his fiancé, two dogs, and a ghost.
Share
Facebook
Twitter
Linkedin
Email
Print
WhatsApp
Pinterest
ReddIt
Tumblr
Previous articlePeter van Roden to Oversee Location-Based Operations for National Geographic as Senior VP Global Experiences & Events
Next articleUniversal Orlando Announces Shows and Interactive Adventures at The Wizarding World of Harry Potter – Diagon Alley