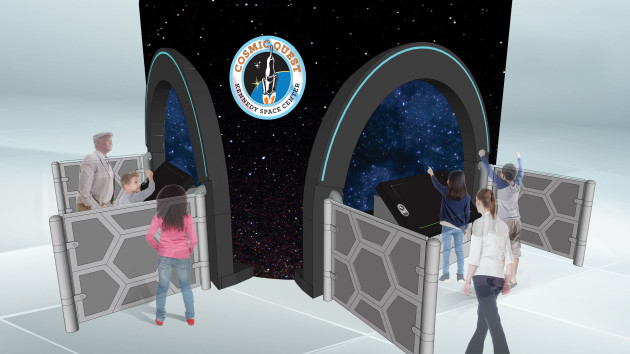 “At Cosmic Quest, kids can explore a world of STEM and space-related careers through fun and educational interactive adventures that are based on real NASA endeavors,” said Therrin Protze, chief operating officer, Kennedy Space Center Visitor Complex. “We are proud to offer this new live-action game experience to engage young people’s imaginations and get them excited about their role in future of space exploration.”

In NASA’s Next Rocket Launch Adventure, located at the Apollo/Saturn V Center, “trainees” assemble their launch team from a pool of NASA’s best, including environmental engineers, biologists, computers scientists and other experts, each of whom will be instrumental in overcoming challenges leading up to the launch. As the rocket lifts off the pad, the trainee – safe in mission control – is immersed in the sensations of launch, including powerful vibrations and steam.

At Mars Colony Adventures, located at Journey To Mars: Explorers Wanted, trainees may participate in two exciting missions: building a research exploration base or building a permanent colony, both of which must be able to protect astronauts and colonists from poisonous dust and radiation on the Red Planet and keep them physically and mentally fit. During the adventures, trainees learn about the complications of living on the surface of Mars and the components needed to sustain human life. Trainees see their colony or base displayed as a 3D holograph while using a high-definition touch screen to assemble all the necessary parts.

Asteroid Capture Adventure, located within the IMAX® Theater, calls for trainees to command a robotic spacecraft and overcome challenges in deep space to capture and redirect an asteroid. This deep-space adventure takes place in front of a massive half-dome screen, which completely immerses trainees in “outer space” as they redirect the asteroid into the orbit of Earth’s moon.

Finally, the International Space Station Adventure, located within Space Shuttle AtlantisSM, challenges Cosmic Quest trainees to gather items and information to complete various experiments on the International Space Station (ISS): Humans in Space, Plant Systems in Space, Materials in Space and Closed Loop Systems. Trainees perform life-science experiments and discover what astronauts are doing on the ISS right now. Using large, interactive touch screens, they solve challenges such as countering the negative effects of microgravity on the human body and creating an efficient greenhouse to grow vegetables using aeroponics. While performing the experiments, trainees find out how space research not only will prepare humans for life on Mars, but also how it improves medicine, farming and technology here on Earth.

Robonaut, a replica of NASA’s real R2 robot currently working aboard the ISS, serves as a virtual narrator and guide as Cosmic Quest trainees use their “astronaut badges” as activation devices to interact with digital progression points and touch screens located throughout each of the exhibit areas.

Cosmic Quest is offered for $24.95, in addition to the price of daily admission. All adventures are included in the price; the completion of one adventure is not dependent on other adventures.

Joe Kleimanhttp://wwww.themedreality.com
Raised in San Diego on theme parks, zoos, and IMAX films, InPark's Senior Correspondent Joe Kleiman would expand his childhood loves into two decades as a projectionist and theater director within the giant screen industry. In addition to his work in commercial and museum operations, Joe has volunteered his time to animal husbandry at leading facilities in California and Texas and has played a leading management role for a number of performing arts companies. Joe previously served as News Editor and has remained a contributing author to InPark Magazine since 2011. HIs writing has also appeared in Sound & Communications, LF Examiner, Jim Hill Media, The Planetarian, Behind the Thrills, and MiceChat His blog, ThemedReality.com takes an unconventional look at the attractions industry. Follow on twitter @ThemesRenewed Joe lives in Sacramento, California with his wife, dog, and a ghost.
Share
Facebook
Twitter
Linkedin
Email
Print
WhatsApp
Pinterest
ReddIt
Tumblr
Previous articleUniversal Orlando Unveils First Details of Skull Island: Reign of Kong
Next articleLuigi’s Rollickin’ Roadsters Brings Trackless Fun to Disney’s Cars Land