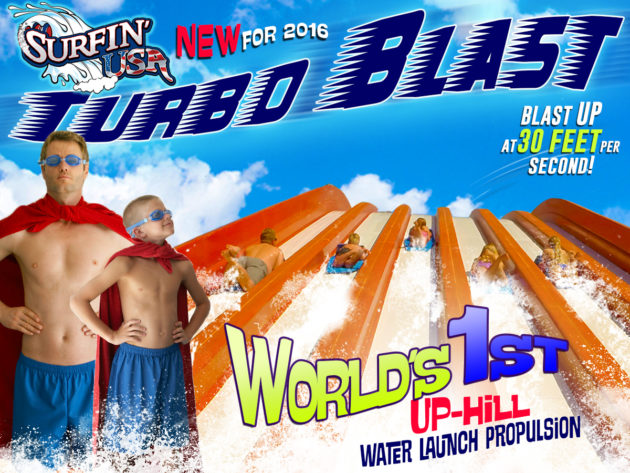 Las Vegas, NV, USA – Cowabunga Bay waterpark, now open daily, announces the first slide of its kind, Surfin’ USA’s Turbo Blast. The award winning waterpark, known for its slides, strives to be the leader in family fun, delivering state of the art rides, and a variety of entertainment for all ages. This third summer season, Cowabunga Bay is also adding evening activities to its anticipated Slide Nights, including live DJ’s, fire dancers, an illuminated park, thrilling night slides and a dazzling firework display every Friday and Saturday night through August 20.

“There’s an old saying: what goes up must come down. We’re putting a unique spin on that saying and claiming what goes down must come up!” says Cowabunga Bay General Manager, Shane Huish.

The patented water jet propulsion launches guests uphill at 30 feet per second after they first race downhill. Created with industry leaders, Sky Turtle and Avalanche Waterslides, the unique element of Cowabunga Bay’s Surfin’ USA Turbo Blast, promises a one-of-a-kind water slide experience. First, guests race down the hill from a height of 55 feet and then the new technology blasts daring riders, 30 feet per second, up and over a 30 foot hill, ending in a splashdown finale.

“Additionally, we have enhanced our Slide Nights, where the park is illuminated and will feature a professional fireworks and entertainment show, filled with DJ’s and fire dancers each weekend”, added Huish. Spectacular Slide Nights begin Friday, June 10th and will continue every weekend throughout the summer until August 20th. The park will be transformed into an electrifying summer paradise and will include fire dancers, DJ’s spinning the latest tunes and the night will end with an amazing display of fire- works. Spectacular Slide Nights are included with daily admission and season passes. A special evening price is available for $25.99 after 5 p.m. and will include all of the festivities.

Joe Kleimanhttp://wwww.themedreality.com
Raised in San Diego on theme parks, zoos, and IMAX films, InPark's Senior Correspondent Joe Kleiman would expand his childhood loves into two decades as a projectionist and theater director within the giant screen industry. In addition to his work in commercial and museum operations, Joe has volunteered his time to animal husbandry at leading facilities in California and Texas and has played a leading management role for a number of performing arts companies. Joe previously served as News Editor and has remained a contributing author to InPark Magazine since 2011. HIs writing has also appeared in Sound & Communications, LF Examiner, Jim Hill Media, The Planetarian, Behind the Thrills, and MiceChat His blog, ThemedReality.com takes an unconventional look at the attractions industry. Follow on twitter @ThemesRenewed Joe lives in Sacramento, California with his wife, dog, and a ghost.
Share
Facebook
Twitter
Linkedin
Email
Print
WhatsApp
Pinterest
ReddIt
Tumblr
Previous articleNational Geographic and iP2 Entertainment to Create Indoor Interactivity Centers for Global Market
Next articleMako Transforms SeaWorld Orlando Skyline with Shark-Themed Trains