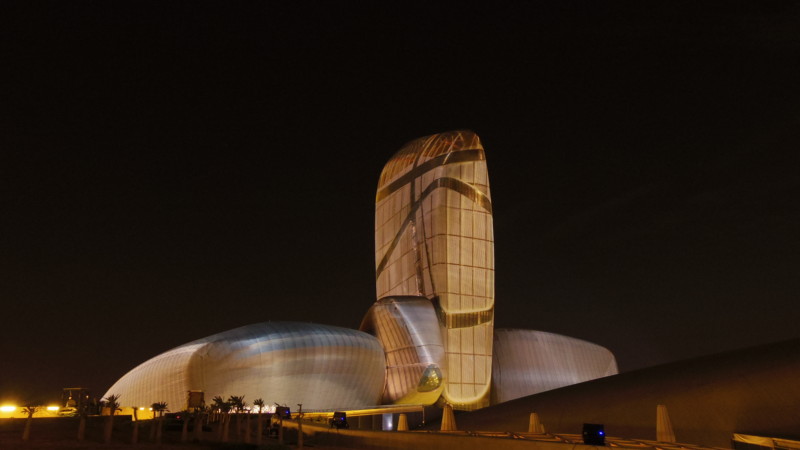 The Kingdom of Saudi Arabia has officially inaugurated the , whose debut was marked by stunning video projection mapping across the streamlined, modernist façade.  Belgium-based Visual Solutions crafted the week-long, nighttime display powered by 52 projectors and six 4x4pro media servers with VFC cards from d3 Technologies.

The King Abdulaziz Center for World Culture is an initiative of Saudi Aramco, the Kingdom’s major oil company.  It is located in Dhahran, Saudi Aramco’s hometown. Norwegian architectural firm, Snohetta, designed the building, which features a 200,000-book library, cinema, auditorium, exhibition halls, museum and more.  Its goal is to foster cultural development throughout the Kingdom.

Visual Solutions’ brief for the video projection mapping evolved from an initial 180º design to a 270º mapping to a final 360º projection mapping covering the entire building.  UV mapping of the structure was done by d3 Rental partner By-Lex, based in Cologne, Germany.

“There was no question of using anything other than d3 for this show,” says Jo Pauly, Managing Director and Head of Productionat Visual Solutions, who says the extensive projector set up was previsualized in d3.  “d3 helped us position the projectors, check how the projection would react on the building in terms of shadow and light output and even deformation.  It was a great tool for visualizing and predicting our lens types and output power.”

The Visual Solutions team also found other advantages to using d3.  “The ability to use multiple editors on one system to perform cable and wireless alignment was key to this project,” Pauly reports.  “And versioning made it easy for the content producers.”

The video projection mapping depicted chapters from the cultural history of Saudi Arabia from ancient times to today; it also ushered viewers through the new building, which was shown in abstract wireform, solid and tiled modes.  Content was created by Belgium-based Dirty Monitor.

“We used up to 10 outputs per machine, and the 4x4pros worked like a charm,” says Pauly.

In addition to the video projection on the façade, the grand opening also featured a holographic LED show driven by a d3 v.2.5 system and the mapping of a model of the building, which was run from a d3 4x4pro.

Joe Kleimanhttp://wwww.themedreality.com
Raised in San Diego on theme parks, zoos, and IMAX films, Joe Kleiman would expand his childhood loves into two decades as a projectionist and theater director within the giant screen industry. In addition to his work in commercial and museum operations, Joe has volunteered his time to animal husbandry at leading facilities in California and Texas and has played a leading management role for a number of performing arts companies. Joe has been News Editor and contributing author to InPark Magazine since 2011. HIs writing has also appeared in Sound & Communications, LF Examiner, Jim Hill Media, and MiceChat. His blog, ThemedReality.com takes an unconventional look at the attractions industry. Follow on twitter @ThemesRenewed Joe lives in Sacramento, California with his fiancé, two dogs, and a ghost.
Share
Facebook
Twitter
Linkedin
Email
Print
WhatsApp
Pinterest
ReddIt
Tumblr
Previous articleWinners Announced For 12th Annual LA 3-D Movie Festival
Next articleD3D Installing Two Digital Theater Systems at Atlanta’s Fernbank Museum of Natural Science