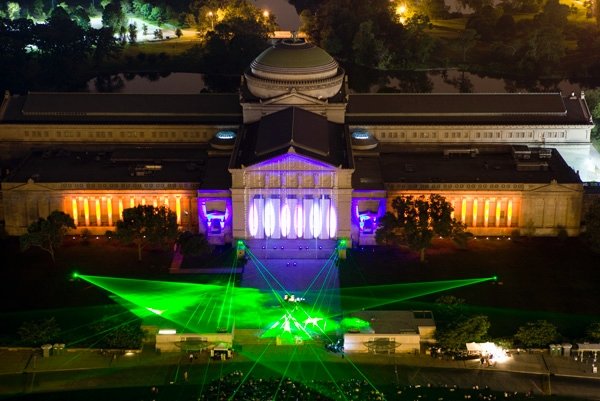 The Museum of Science and Industry, Chicago (MSI) has selected D3D Cinema to install its laser-illuminated, ultra-high resolution projection system utilizing Christie technology into MSI’s five-story domed theater.  The new technology will premiere to MSI’s visitors in summer 2017 and subsequently will be featured during the Giant Screen Cinema Association conference in September, a forum that will showcase the new technology to giant screen operators and delegates from around the globe.

Replacing the existing 15/70mm film projection system, D3D’s laser-illuminated projection system features ultra-high 6K resolution, high frame rate capability (up to 120 fps), and supreme contrast ratios. The state-of-the-art lasers are capable of delivering up to 150,000 lumens on the dome with a brilliant expanded dynamic range and color gamut far beyond the capabilities of film-based and xenon-illuminated projection systems.  The audio upgrade will feature a dome-optimized surround-sound speaker array delivering 25,000 watts of power.

“We are excited to debut this technology in Chicago and believe that D3D and Christie’s laser-illuminated solution will continue to create the sense of awe that MSI guests have come to expect,” said Gil Perez, Director of Film and Guest Operations at MSI. “We have set the bar extremely high, and we are confident that our decision to proceed with D3D’s laser technology will provide a superior, immersive experience.”

“We’re grateful for the trust MSI has placed with D3D to provide this generational upgrade for their giant dome theater,” said Derek Threinen, Vice President of Business Development for D3D.  “Building on the success of our recent installation and demonstration of this system, we’re excited about the enthusiasm shown within the industry for this long-awaited solution.  MSI’s adoption of this remarkable new technology will add significant momentum to our efforts to bring the uncompromising quality of viewer experience and operational savings these systems represent to giant domes throughout the world.”

“As a Chicago-area company, to be selected by MSI – our hometown giant screen – has special meaning for D3D,” said Don Kempf, President and Founder of D3D Cinema.  “In fact, it was in MSI’s very theater, twenty years ago, that I was inspired to enter the giant screen industry and start producing films in this incomparable medium.  So it gives me great pride, personally, to be involved in this project.  MSI has always been, and will continue to be, one of the preeminent dome theaters in the world.”

Joe Kleimanhttp://wwww.themedreality.com
Raised in San Diego on theme parks, zoos, and IMAX films, InPark's Senior Correspondent Joe Kleiman would expand his childhood loves into two decades as a projectionist and theater director within the giant screen industry. In addition to his work in commercial and museum operations, Joe has volunteered his time to animal husbandry at leading facilities in California and Texas and has played a leading management role for a number of performing arts companies. Joe previously served as News Editor and has remained a contributing author to InPark Magazine since 2011. HIs writing has also appeared in Sound & Communications, LF Examiner, Jim Hill Media, The Planetarian, Behind the Thrills, and MiceChat His blog, ThemedReality.com takes an unconventional look at the attractions industry. Follow on twitter @ThemesRenewed Joe lives in Sacramento, California with his wife, dog, and a ghost.
Share
Facebook
Twitter
Linkedin
Email
Print
WhatsApp
Pinterest
ReddIt
Tumblr
Previous articlePanasonic to Provide Projection Technology Including Laser to US Disney Parks and Cruise Ships
Next articleLightswitch Brings Descanso Gardens’ Forest of Light to Vivid Life with MA onPC Systems