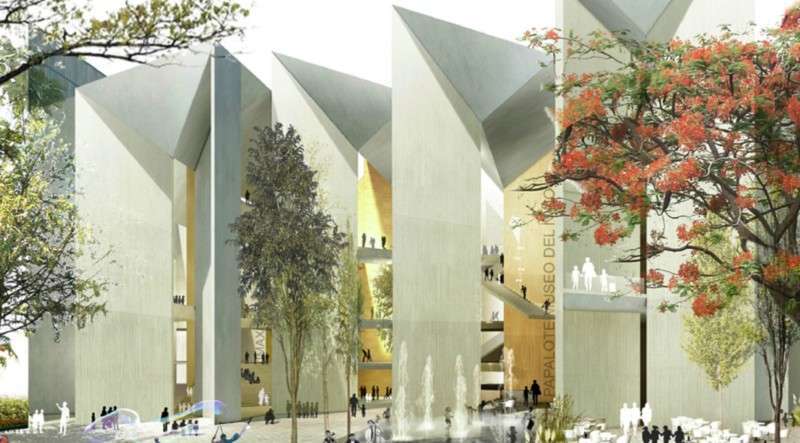 D3D Cinema announces that its pioneering giant dome laser projection technology has been selected for integration at the new Papalote Museo del Niño, Iztapalapa in Mexico City.  The museum is presently under construction and on target to premiere in summer 2018.  The facilities include a new giant screen cinema dome, the first of its kind to be built in the Western Hemisphere in over two decades.  The new dome will feature D3D’s Laser CineDome technology, a revolutionary laser-illuminated projection platform powered by Christie Digital, making Papalote the first giant screen exhibitor in Mexico to announce a laser projection installation.

“We love that we are bringing a high-quality laser dome solution to Papalote Iztapalapa hand-in-hand with D3D,”said Marcia Larios Morales, Director of Papalote Museo del Niño, Iztapalapa. “The Iztapalapa site complements our other museum locations, but it will be the first to feature a dome. We believe that the dome format is truly the most distinguished and unique in the market to support the education of Mexican families in Iztapalapa. This theater will offer our visitors a movie experience that is entertaining, educational, very special and memorable.”

Built around three of Christie’s premium laser-illuminated cinema heads, the Laser CineDome platform was designed to enhance the giant dome viewing experience as well as maximize profitability for museum cinema operators.  In addition to the ultra-high definition (6K) laser playback, the system package delivers DCI compliance and over 20,000 watts of dome-optimized surround sound audio. Laser CineDome is currently installed at the Museum of Science and Industry in Chicago and at the Great Lakes Science Center in Cleveland.

“We are excited to partner with D3D.  The Laser CineDome presentation quality is second to none and we are thrilled to offer this experience to our audience in Iztapalapa and Mexico City in general”, said Ruben Piza, Director of Commercial and Development at Papalote.  “We’re eager to premiere this technology in Mexico and feature the best dome content on the market.  D3D’s CineDome system is the right choice to offer a first class experience in this format to our visitors”.

“D3D is excited to be expanding our CineDome platform into Mexico and extremely proud that our technology will be featured in the first new giant dome to be constructed in many years,” said Don Kempf, President and Founder of D3D Cinema.  “Domes have always been special, but our new laser technology, coupled with ultra high-resolution cameras for dome film production, ushers in a new era for the dome medium.   With dramatically improved operating economics over 15/70mm film, we are hopeful that more museums around the world will look to bring the D3D/Christie Laser CineDome platform to their visitors.   Congratulations to Papalote for embracing this beloved format and bringing a 21st century dome experience to Mexico.”

Joe Kleimanhttp://wwww.themedreality.com
Raised in San Diego on theme parks, zoos, and IMAX films, InPark's Senior Correspondent Joe Kleiman would expand his childhood loves into two decades as a projectionist and theater director within the giant screen industry. In addition to his work in commercial and museum operations, Joe has volunteered his time to animal husbandry at leading facilities in California and Texas and has played a leading management role for a number of performing arts companies. Joe previously served as News Editor and has remained a contributing author to InPark Magazine since 2011. HIs writing has also appeared in Sound & Communications, LF Examiner, Jim Hill Media, The Planetarian, Behind the Thrills, and MiceChat His blog, ThemedReality.com takes an unconventional look at the attractions industry. Follow on twitter @ThemesRenewed Joe lives in Sacramento, California with his wife, dog, and a ghost.
Share
Facebook
Twitter
Linkedin
Email
Print
WhatsApp
Pinterest
ReddIt
Tumblr
Previous articleLong-term Plans for Expo 2020 Dubai Site to be Unveiled at CityScape Global
Next articleLisa Junkerman Joins ITEC as Chief Marketing Officer & Director of Corporate Development