Dancing With Technology: Yves Pépin is a Modern Epic Storyteller 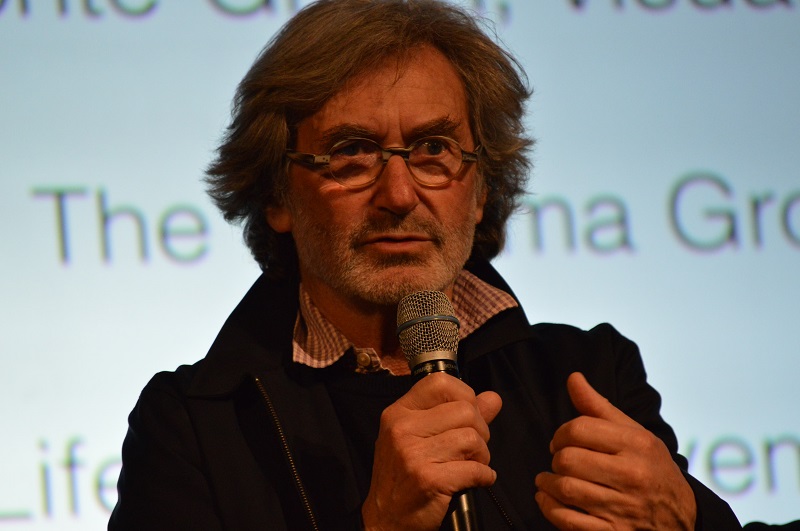 Looking at his body of work, you might imagine Yves Pépin studied choreography, performing arts, and stage design along with mythology and history – then perhaps became a filmmaker. In fact, Pépin applied himself to economics and politics, then Arabic studies – then worked as a journalist. But all along that academic path he kept his hand in the arts – painting, music, theater. “Art was a way of life in my family,” he says. His father, an engineer by trade, was a violinist and painter. His mother, a homemaker, also painted. Six-year-old Yves took up the violin, intending to be a concert performer. But in adolescence, “I realized I was not good enough.” He switched to guitar and “started to play rock ‘n’ roll like a normal teenager. It opened up my mind.”

The academic world attracted him, but ultimately failed to satisfy – in Lebanon, he halted his post-grad Arabic studies and went off to be a journalist. “I was trapped by the real world.” He acquired the “tools of expression” through two years’ work in radio and television, followed by four years with a communications company. ECA2 was founded in Paris in 1974. It was named after an earlier company, Etudes Creation d’Ambiances, an important innovator in large scale, sound-and-light shows. Pierre Arnaud of the original ECA was Pépin’s mentor.“We were very ambitious: we intended to integrate light, sound and architecture to express something in a global context for the modern world,” says Pépin. When human imagery and human performance were brought into the mix, the toolset was complete.

It was in the 1980s and 1990s that Pépin, with ECA2, conclusively defined the nighttime spectacular. Employing gigantic cinematic images projected onto the sides of buildings and other structures, and onto sheets of water or mist, enhanced by lasers, lighting, special effects and sound, Pépin’s team created shows that transformed outdoor environments and transported audiences.

Disney and Universal both adopted Pépin’s proprietary AQUASCAN® water screen projection system, developed in 1989. According to Pépin, the night he first tested the system, a tourist couple showed up, captivated by the image of a human face appearing in a fountain, seemingly out of nowhere. After blustering his way through an attempt to explain it to his wife, the husband turned to Pépin, who gently corrected him. “I pointed to the guy working at the pump and said he was putting a special powder in the water, and the powder was what made the image appear.”

Pépin has consistently worked on a world stage, unfurling epic-scale, multimedia productions at international sports competitions, world expositions, special events, corporate events and theme parks. His millennial Fireworks Spectacular at the Eiffel Tower in 2000 captivated the public and the media, made the covers of both Time and Newsweek, and brought him global celebrity and acclaim.

High-tech media is inherent to the kind of epic story Pépin tells, and to the vividness and vast scope of his productions. “We use technology and humanity to express the relationship between technology and humanity – the connection between the cold and the warm. Scenography and technology are part of the working context, not just the means. I don’t design the story, then look for the technology to express it. I refuse that way of working.” He likens it to sculpture: “The stone is as important as the subject. And by working on a highly precise, technical level, we make the audience forget that they’re looking at technology.”

Pépin has been consistently drawn to the exotic, to search within it for the universal, the common human elements – and find them. Traveling a great deal with his family as a youth, and on his own as a teen, Pépin was an avid museum-goer. “I absorbed symbols. I tried to find in other cultures the codes – the language they express.”

He produces events that speak in timeless, wordless tongues to global audiences. “I tell my people to be very open to the culture in front of us, to listen. It must be instinctive. When you reach into yourself to find what is common beyond the codes and signs, you find the answer in yourself. You don’t ‘adapt,’ you don’t ‘translate.’ You don’t masquerade as someone of another culture.

“We must never forget we are making shows,” says the former student of political science. “We are not the UN. We are in the field of entertainment.”

Yves Pépin ran ECA2 for more than 25 years (the company is still doing business and garnering awards, now headed by Jean-Christophe Canizares). He is now an independent show producer and creative director for major projects. His

achievements have been honored with many awards over the years, including multiple Thea Awards from the Themed Entertainment Association. Awarded projects include the Lisbon Expo 98 night show, the Millennium Show at the Eiffel Tower, the historical multimedia show in El Tajin in Mexico, the Toyota “Life is Movement” show at Aichi Expo 2005 in Japan, and “Songs of the Sea” at Sentosa Island in Singapore. The Beijing 2008 Olympics Ceremonies were honored with a Thea Award as well as the Artistic Directors Club Prize.

In 2006, Yves Pépin also received the Thea Lifetime Achievement Award honor, in recognition of his entire work and career.

This article was originally published in the annual Thea Awards Program, by the Themed Entertainment Association.

Judith Rubin
Judith Rubin ([email protected]) is a leading journalist, publicist, strategist, blogger, content marketing specialist and connector in the international attractions industry. She excels at writing about all aspects of design and technical design, production and project management. Areas of special interest include AV integration and show control, lighting design and acoustics, specialty cinema, digital video and world’s fairs. Judith has ties to numerous industry organizations. From 2005-2020 she ran communications, publications and social media for the Themed Entertainment Association (TEA). In 2013, she was honored with the TEA Service Award. She was development director of IMERSA, and co-chair of the 2014 IMERSA Summit. She was publicist for the Large Format Cinema Association in the 1990s, now part of the Giant Screen Cinema Association (GSCA) and has also contributed to the publications of PLASA, IAAPA and the International Planetarium Society. Already making her mark as a magazine and book editor, Judith joined World’s Fair magazine in 1987, which introduced her to the attractions industry. Launching as a freelancer in the mid 1990s she has contributed to dozens of publications and media outlets including Funworld, Lighting&Sound America, Sound & Communications, Urban Land, The Raconteur and The Planetarian. She joined InPark in 2010. Judith earned a Bachelor of Fine Arts from Pratt Institute. She has lived in New York City and the San Francisco Bay Area, and now makes her home in Saint Louis, where she is active in the local arts and theater community.
Share
Facebook
Twitter
Linkedin
Email
Print
WhatsApp
Pinterest
ReddIt
Tumblr
Previous articleInt’l Dark Sky Assn. & Loch Ness Prodns. present "Losing the Dark" fulldome video at gathering of astronomy community in Beijing
Next articleAudubon Nature Institute Closed in Anticipation of Potential Hurricane Isaac