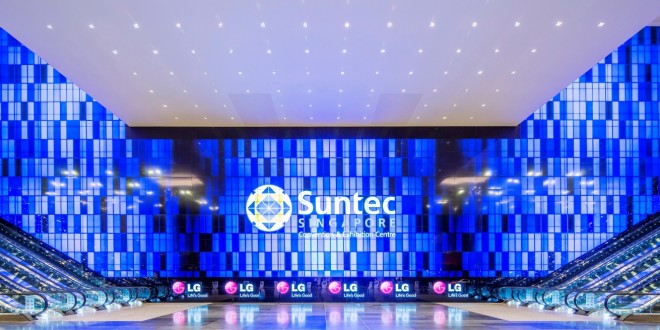 Linköping, Sweden — Standing over 15 meters tall and 60 meters wide, “The Big Picture” has the official Guinness World Records title for the “Largest High Definition Video Wall”. It is located inside the main lobby and entrance to Suntec Exhibition and Convention Centre (Suntec Singapore) and is fast becoming a hotspot for photo-taking by delegates and Suntec City shoppers alike. The system relies on the amazing Dataton WATCHOUT™ multi-image display and presentation software to manage its large-format, dynamic and ever-changing content that is presented over 664 integrated LG LED flat panel displays.

Arun Madhok, CEO of Suntec Singapore said: “The full HD digital wall is an integral part of our technology suite which includes digital signage and free Wi-Fi. This mega screen with its captivating content is fast becoming a hotspot for photographers providing an iconic and memorable souvenir of Singapore. High definition content is played 16 hours each day delighting the convention centre visitors and Suntec City shoppers alike.

“The Big Picture is fast becoming a hotspot for photo-taking providing an iconic and memorable souvenir of Singapore. In addition, it has successfully achieved a new Guinness World Records title for Largest High Definition Video Wall.”

Fredrik Svahnberg, marketing director at Dataton said: “Our software designers have worked tirelessly over the years to create a single robust system that can handle an unprecedented quantity of video and data on such a huge real-time display. We’re delighted that WATCHOUT technology has been put to the test and is an integral part of The Big Picture at Suntec Singapore. It’s validating that the project and its technology partners involved are officially recognised by Guinness World Records and as part of a smart building our technology is used to bring a return on investment to the owner as well as to inform, engage and enthral local and international visitors to Singapore.”

The project was managed by Suntec Singapore working with an expert team of Asia-based technology partners including global automation controls specialist, Honeywell who were appointed master systems integrators for the project.

“We understood Suntec Singapore’s vision to be a convention and exhibition centre of the future,” said Ananda Seshadri, regional marketing leader at Honeywell. “We leveraged the latest technologies to help Suntec achieve their business goals. The big digital screen with the application of WATCHOUT certainly has the ‘wow factor’ for visitors and Suntec exhibitors use it as a fantastic advertisement placement.’ 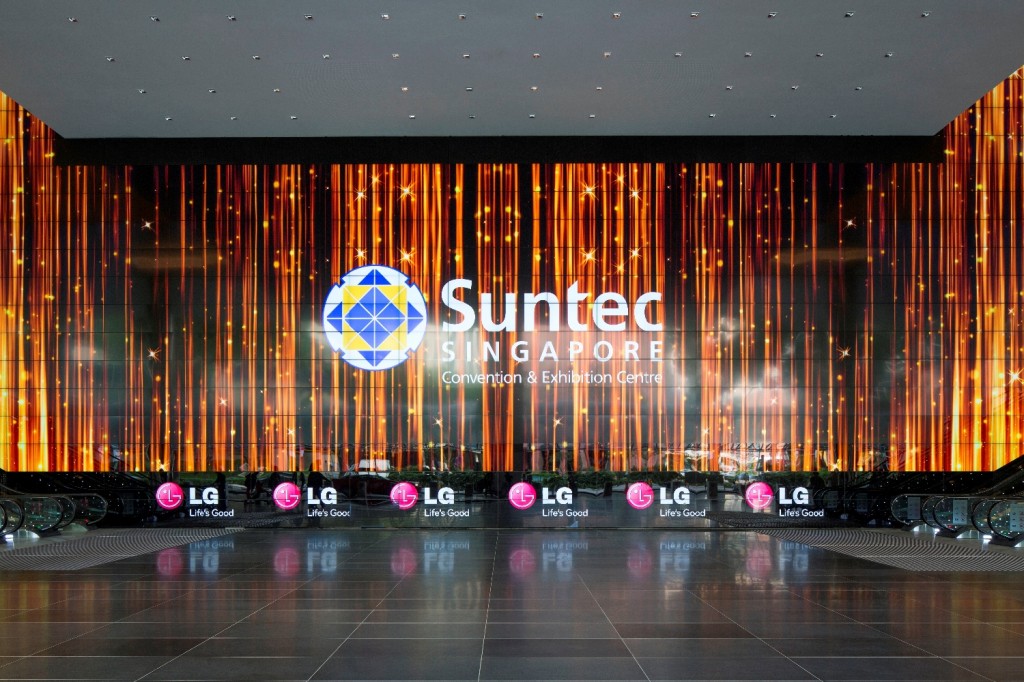 LG acted as systems engineers to design and analyse the system and manage subcontractors such as ACETEL Korea.

“ACETEL were responsible for supplying Dataton WATCHOUT for The Big Picture as well as designing and installing the visual display system according to LG and Honeywell’s requirements,” explains Jeong-Mok Byun, team leader of visual solution division at ACETEL.

The Big Picture acts as a standalone exhibit allowing a combination of multiple media such as still images, animations and video clips to be shown at the same time, or a single media image in native format to be displayed over the entire wall.

Mr Oh, Technical Manager, LGE Singapore explains: “LG worked on the design of the visual display system and it evolved to be the largest HD LED screen in the world. Early in the design phase, we discussed with Dataton the possibility of the project being the largest HD LED screen and on finding out that it could, we selected WATCHOUT as the main multi-image display and presentation system.

“The Big Picture is controlled and operated by three major subsystems which are the video wall, playback, integration and control. Playback manages content and the principle of the design is to support multi-display and 4K images from 21 WATCHOUT display servers, serving 84 full HD outputs.

“The integration and control system acts to control The Big Picture and servers, turning them on or off as required. It also manages playback where a part of a show at a specific time can be selected or it can be used to manage interactive content.”

Content for the system can be updated according to the exhibition taking place. It also uses a variety of ultra-high resolution content from Suntec Singapore and its advertisers.

Lasanthi Bandara, manager, audio-visual technology and content at Suntec Singapore explained: “WATCHOUT is being used to primarily display content on all 664 screens seamlessly. Content is also designed, animated, and produced within the WATCHOUT system itself.

“There was no other feasible and scalable technology available in the market that could enable us to create such high definition display. WATCHOUT was selected because of its primary capability to display synchronised content on multiple screens,” added Bandara.

Bernard Ng, digital creative curator at Suntec Singapore explained: “Audio, video and graphic content are used together to create spectacular showcases and presentations on The Big Picture. The design challenge here is simply the immense size of our entire screen. Producing and rendering videos and animations at this scale is incredible but potentially time consuming. However, production time is greatly reduced by maximising WATCHOUT’s ability in allowing us to create amazing content directly within the system itself.

“For content management, WATCHOUT allows content to be stored and managed in media containers with auxiliary timelines. This allows my team to manually organise and manage content according to scheduling and requirements.”

The system is designed to be integrated with other building systems and to bring in return on investment.

“The initial plan was not to build the largest HD LED screen in the world. The Level 1 of our building was initially designed as the lobby entrance to our venue and following a major modernisation programme, the idea of having a HD LED screen was realised in the form of The Big Picture. The size of The Big Picture was in accordance to our overall design of venue entrance. We are very delighted that an unexpected design step turned into the largest HD LED screens in the world,” said Arun Madhok, CEO of Suntec Singapore.

Suntec Singapore measures the success of The Big Picture from its reception on multiple social media platforms tagging Suntec Singapore as their check-in location, newspaper and media coverage featuring The Big Picture as well as filmography interests. Operationally there are benefits such as reduced costs and increased advertising revenue that assist the centre in being profitable and sustainable.

“It is great to see our organisers and delegates posing in front of The Big Picture with big smiles. One more reason why Suntec Singapore is the Preferred Place to Meet,” ended Madhok.

Joe Kleimanhttp://wwww.themedreality.com
Raised in San Diego on theme parks, zoos, and IMAX films, InPark's Senior Correspondent Joe Kleiman would expand his childhood loves into two decades as a projectionist and theater director within the giant screen industry. In addition to his work in commercial and museum operations, Joe has volunteered his time to animal husbandry at leading facilities in California and Texas and has played a leading management role for a number of performing arts companies. Joe previously served as News Editor and has remained a contributing author to InPark Magazine since 2011. HIs writing has also appeared in Sound & Communications, LF Examiner, Jim Hill Media, The Planetarian, Behind the Thrills, and MiceChat His blog, ThemedReality.com takes an unconventional look at the attractions industry. Follow on twitter @ThemesRenewed Joe lives in Sacramento, California with his wife, dog, and a ghost.
Share
Facebook
Twitter
Linkedin
Email
Print
WhatsApp
Pinterest
ReddIt
Tumblr
Previous article
Issue #50: IAAPA 2013
Next article
Exploratorium to Open Satellite Location in Los Altos December 13