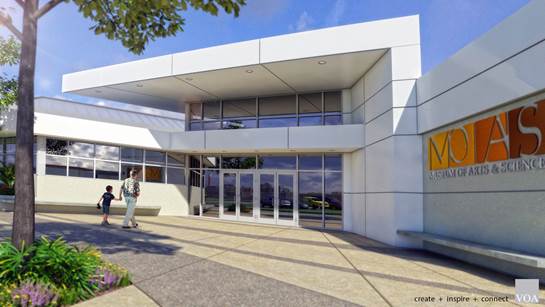 Orlando, FL, USA (September 18, 2014) – The Orlando office of VOA Associates, Inc. provided architecture, planning and interior design services for the new $1.6 million Museum of Arts and Sciences (MOAS) Planetarium that officially opened to the public on August 23rd.  The new Planetarium replaces the original structure damaged by flooding in 2009. After competing in a design competition in 2011, VOA was selected by MOAS to design a series of projects that include the new Planetarium, the Root Family Museum and the new West Wing addition.

The Planetarium is a state-of-the-art dome with a computer-driven projector, allowing a profound tour of the universe. As one of the most advanced facilities in the southeast, it was essential that VOA’s cutting-edge design convey the vision of soaring imagination inspired by astrological science. A daringly high ceiling, and a double-height glass wall in the lobby welcome light from the skies deep into its interior space.

In addition to the Planetarium, VOA provided design services for the Root Family Museum, expected to open Fall of 2014, and the new West Wing addition opening Fall of 2015. VOA’s design for the Root Family Museum was designed to evoke the look and feel of a passenger train platform from the glory days of rail travel. The West Wing addition will house five galleries staging MOAS’ world-class permanent collection and a sixth gallery that will accommodate the Museum’s traveling exhibits. VOA’s design concept focused on the innovative reinvention of the traditional museum experience and reinforces the inter-connectedness of the Arts, Sciences and History.

Joe Kleimanhttp://wwww.themedreality.com
Raised in San Diego on theme parks, zoos, and IMAX films, InPark's Senior Correspondent Joe Kleiman would expand his childhood loves into two decades as a projectionist and theater director within the giant screen industry. In addition to his work in commercial and museum operations, Joe has volunteered his time to animal husbandry at leading facilities in California and Texas and has played a leading management role for a number of performing arts companies. Joe previously served as News Editor and has remained a contributing author to InPark Magazine since 2011. HIs writing has also appeared in Sound & Communications, LF Examiner, Jim Hill Media, The Planetarian, Behind the Thrills, and MiceChat His blog, ThemedReality.com takes an unconventional look at the attractions industry. Follow on twitter @ThemesRenewed Joe lives in Sacramento, California with his wife, dog, and a ghost.
Share
Facebook
Twitter
Linkedin
Email
Print
WhatsApp
Pinterest
ReddIt
Tumblr
Previous articleVirginia Aquarium Selects D3D Cinema for Conversion of Giant Screen Theater to 4K 3D Digital System
Next article2014 Jackson Hole Science Media Awards Finalist & Winners Announced