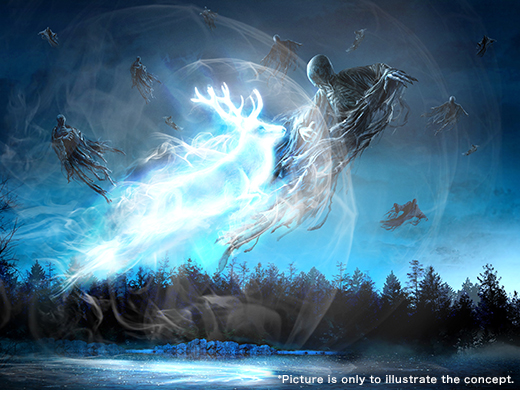 On Wednesday April 21, 2017, a large scale nighttime spectacular, will debut in The Wizarding World of Harry Potter at Universal Studios Japan. Guests will be immersed in J.K. Rowling’s Wizarding World as the students of Hogwarts School of Witchcraft and Wizardry fight off Dementors who descend across the Black Lake for a one-of-a-kind show that’ll leave fans surprised and excited. On the same day, guests can experience new Wand Magic in Hogsmeade village.

The night show in The Wizarding World of Harry Potter will use projection mapping to bring the magic and wonder of Harry Potter to life in a way never before seen at Universal Studios Japan. The immersive show unfolds above the Black Lake with Hogwarts castle serving as the backdrop and focal point. The technology will light up the night sky as Dementors fly ominously along the castle.

Opening on the same day as the night show, are new Wand Magic locations where guests can experience the joy of casting spells. Following the Magical Wand Map, guests can practice their magic throughout the land from the moment they encounter the Hogwarts Express conductor to when they approach Hogwarts castle. Wand Assistants will be on hand to assist new witches and wizards as they try new spells.

Joe Kleimanhttp://wwww.themedreality.com
Raised in San Diego on theme parks, zoos, and IMAX films, InPark's Senior Correspondent Joe Kleiman would expand his childhood loves into two decades as a projectionist and theater director within the giant screen industry. In addition to his work in commercial and museum operations, Joe has volunteered his time to animal husbandry at leading facilities in California and Texas and has played a leading management role for a number of performing arts companies. Joe previously served as News Editor and has remained a contributing author to InPark Magazine since 2011. HIs writing has also appeared in Sound & Communications, LF Examiner, Jim Hill Media, The Planetarian, Behind the Thrills, and MiceChat His blog, ThemedReality.com takes an unconventional look at the attractions industry. Follow on twitter @ThemesRenewed Joe lives in Sacramento, California with his wife, dog, and a ghost.
Share
Facebook
Twitter
Linkedin
Email
Print
WhatsApp
Pinterest
ReddIt
Tumblr
Previous articleHeidi Voorhees Named COO of InfoComm International
Next articleBusch Gardens Williamsburg Replacing Motion Simulator’s Film Screen With Virtual Reality Headsets