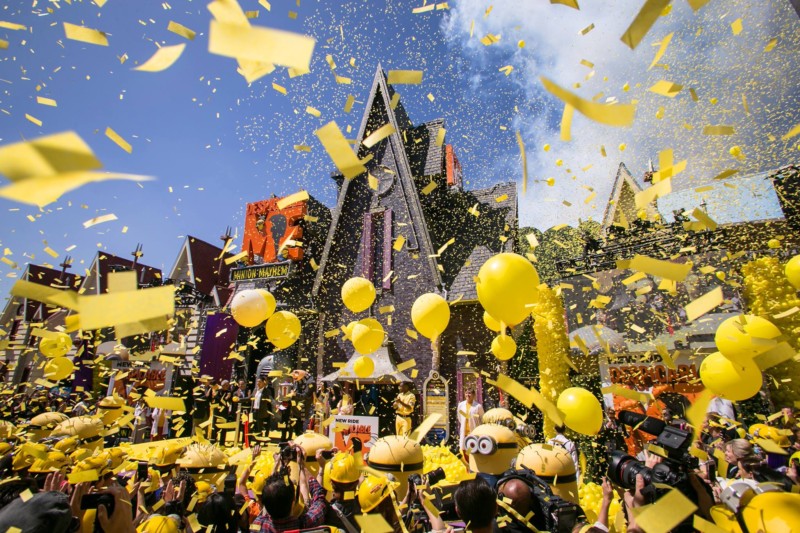 Universal City, CA, USA (April 11, 2014) /PRNewswire/ — “Despicable Me Minion Mayhem,” an original 3D Ultra-HD adventure, and “Super Silly Fun Land,” an immersive carnival setting – both based on Universal Pictures and Illumination Entertainment’s worldwide blockbuster “Despicable Me” franchise – celebrated their dynamic grand opening today at Universal Studios Hollywood.  Among the many surprises inspired by the beloved films, guests will be “turned into” an army of iconic Minions and embark on a secret training mission.

“Despicable Me Minion Mayhem” officially opens to the public at Universal Studios Hollywood on Saturday, April 12, 2014.

The world premiere was attended by many Minions parading along the yellow carpet, who were joined by Chris Meledandri, founder and CEO of Illumination Entertainment; Ron Meyer, Vice Chairman of NBCUniversal; Tom Williams, Chairman & CEO of Universal Parks & Resorts; and Larry Kurzweil, President of Universal Studios Hollywood. L.A. Mayor Eric Garcetti made a special guest appearance to show support for the theme park’s newest addition, speaking to an enthusiastic crowd about Universal Studios Hollywood’s long-term impact on tourism in the region.

“The irreverent humor, endearing characters and storyline that have captivated movie-goers worldwide makes ‘Despicable Me’ a perfect match for our theme park,” said Kurzweil. “This imaginative new attraction will not only take guests on a hilarious and heartwarming adventure that captures the spirit of the film, but will also invite them to embrace their ‘inner Minion’ – that mischievous alter-ego that hides within all of us.”

Voiced by the film’s original stars, the fully immersive motion-simulator ride features the lovable cast of characters who have resonated with audiences across the globe: (former?) super-villain Gru (Steve Carell), his adorable girls – Margo (Miranda Cosgrove), Edith (Dana Gaier) and Agnes (Elsie Fisher) – and an army of unpredictable Minions, voiced by Pierre Coffin.

“‘Despicable Me Minion Mayhem’ and ‘Super Silly Fun Land’ bring our movies to life, with all of the gorgeous artistry, humor and the heart – and of course the thrills – that the team at Universal Studios are known for,” saidChris Meledandri. “In addition to the state-of-the-art 3D ride, we’ve built out an immersive environment with many other attractions – shops, restaurants, countless water features, a round ride, and even the arcade games featured in the first ‘Despicable Me’ movie. Who wouldn’t want to spend a day as a Minion?”

As if lifted from the world of “Despicable Me” and placed within Universal Studios Hollywood, the “Despicable Me” ride welcomes guests to ‘Minion Mayhem’ via Gru and the girls’ idyllic suburban neighborhood, re-created with precision to mirror their ominous house and Miss Hattie’s Home for Girls. Whimsically themed queues, clever preshow videos and comedic dialogue set up Gru’s nefarious plot: to create an army of Minions from guest recruits.

As guests enter Gru’s living room, they will encounter many memorable artifacts from the series, including his notorious SR6 Shrink Ray and rhinoceros chair, and then make their way into Gru’s super-villain laboratory. The exciting journey will send guests, who wear wearing specially-designed 3D “Minion Goggles,” on an excursion through the humorous Minion training mission. Soon, guests will actually become Minions themselves.  A post-show Minion dance party invites everyone to join in the impromptu fun and celebrate the anniversary of Gru and the girls becoming a family. 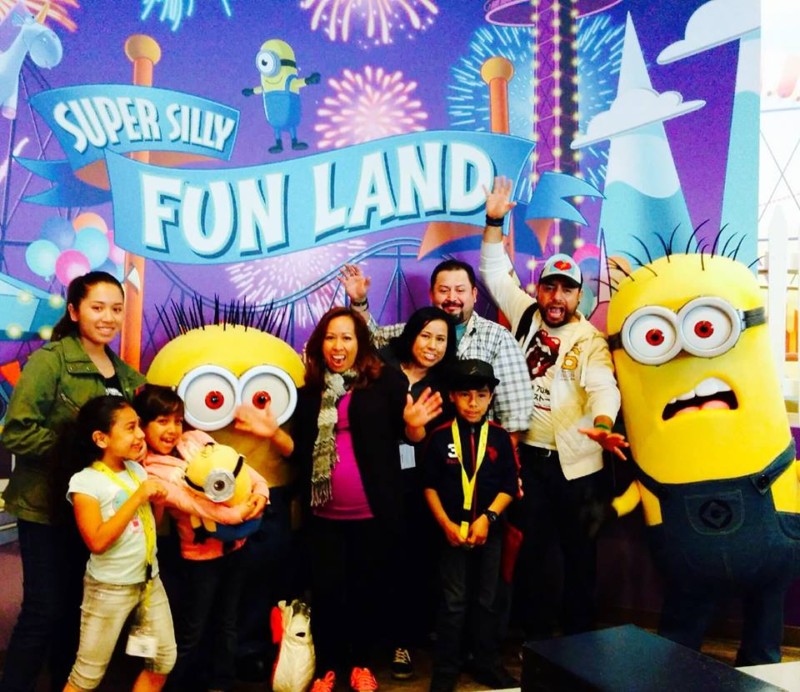 “Super Silly Fun Land,” an all-new elaborate carnival setting and play zone unique to Universal Studios Hollywood, is just adjacent to “Despicable Me Minion Mayhem”. Who doesn’t remember when Gru took the girls to the seaside resort in the first film and “won” Agnes the iconic fluffy unicorn? Now, guests can win a unicorn of their own and roam this uniquely stylized environment, which until now could only be enjoyed on the big screen.

The colorfully themed, interactive Minion-inspired outdoor venue will entertain guests of all ages with more than 80 different water play features. A nearby dry zone will invite guests to climb, jump and slide – while a Minion-themed ride, “Silly Swirly Fun Ride,” will soar and spin guests around for a 360-degree view of “Super Silly Fun Land” aboard a fleet of uniquely-designed ride vehicles.

Together, “Despicable Me Minion Mayhem” and “Super Silly Fun Land” represent a distinct, immersive environment within the theme park – reimagined to fully engage guests in the world of Gru, his girls and the Minions, – joining Universal Studios Hollywood’s dynamic roster of award-winning themed attractions.

Joe Kleimanhttp://wwww.themedreality.com
Raised in San Diego on theme parks, zoos, and IMAX films, InPark's Senior Correspondent Joe Kleiman would expand his childhood loves into two decades as a projectionist and theater director within the giant screen industry. In addition to his work in commercial and museum operations, Joe has volunteered his time to animal husbandry at leading facilities in California and Texas and has played a leading management role for a number of performing arts companies. Joe previously served as News Editor and has remained a contributing author to InPark Magazine since 2011. HIs writing has also appeared in Sound & Communications, LF Examiner, Jim Hill Media, The Planetarian, Behind the Thrills, and MiceChat His blog, ThemedReality.com takes an unconventional look at the attractions industry. Follow on twitter @ThemesRenewed Joe lives in Sacramento, California with his wife, dog, and a ghost.
Share
Facebook
Twitter
Linkedin
Email
Print
WhatsApp
Pinterest
ReddIt
Tumblr
Previous articleSeaWorld Defends Itself Against California Bill to Ban Killer Whales in Parks
Next articlePutnam Museum Adds Science Center