disguise powers new workflow for The House of Dancing Water 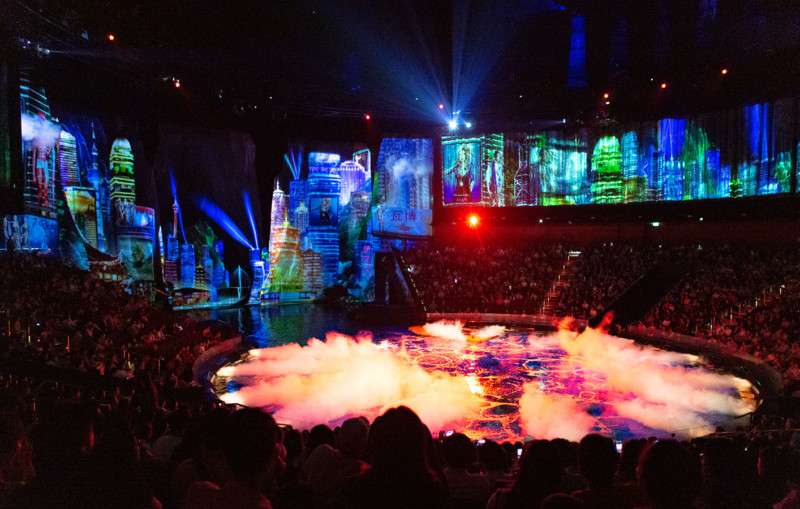 The House of Dancing Water is the world’s largest water-based theatre production, produced by veteran Las Vegas show-maker Franco Dragone, responsible for some of the most prestigious spectacles in Las Vegas. The House of Dancing Water combines water stunts, acrobatics, aerial arts and theatre, and is considered one of the jewels in the entertainment crown in Macau, China.

The show is performed in the tailor-made 2,000-seat ‘Dancing Water’ Theatre by a cast of nearly 100 international artists, and the behind-the-scenes team is comprised of an army of 160 technicians, production staff and scuba divers working tirelessly to make sure the twice-nightly show at the City of Dreams entertainment complex runs without a hitch.

The spectacular show is performed across a multi-level stage that is part of a 3.7 million-gallon pool, with projections that transform the space into locations transcending time and space throughout the 85-minute spectacle. Different projector positions, zoom and focus values are used for multiple screens, including flat stage surfaces, floating fabric being tracked through the air, uneven curtains and water fountains, delivering a captivating and truly unique water stage production.

After wowing audiences since September 2010, the world-renowned show overhauled its entire production workflow, investing in a new fixed technology infrastructure, powered by disguise. There was a unique brief on Macau’s acclaimed $250 million show; to preserve Dragone’s original design aesthetic, whilst increasing technology efficiencies through the upgrade of critical hardware and infrastructure.

“One of the key challenges I had through this migration was to safeguard the integrity of the original video content,” stated Eve Bernier, Lead Projectionist since the shows creation, “Not only were we able to achieve this, but ended up adding an extra punch to our outputs, creating even more magic for the audience. This was thanks to the combination of the disguise VFC card capabilities, and the signal carrier, Lightware Ubex, which allowed for an increase in resolution, and considerable gain in surface coverage per projector.”

“These elements, alongside dynamic blending achieved through the disguise software, resulted in powerful and refreshed brightness.” adds Eve. “Details that were invisible before, are now some of the most talked about features of the show. The use of the new technology enabled a fuller experience for audience members, but still honoured the craftsmanship behind the beautiful original designs for the video projection.”

Re-invigorating the workflow allowed disguise to retain and respect the original production, whilst breathing new life into it for today’s demanding entertainment environment. Dragone, in connection with disguise partner OpticShock, implemented several disguise technologies that now sit at the heart of the entire fixed installation, including disguise’s OmniCal system and a combination of 4x4pro’s and gx 1 servers.

“The decision to go with disguise was multi-layered,” said David Eversfield, from OpticShock. “The hardware provides a solid, industry-proven platform with a clear growth path for the future, combined with software that’s powerful and flexible enough to deal with a demanding timeline composited show. The support teams available internationally and locally are knowledgeable and sensitive to production environments, all while the growing user community provides a rich pool of future crew for the show.”

David also explained how using disguise OmniCal made all the difference to this world-renowned production. “Working in a 270-degree theatre, the OmniCal system allowed us to align the video projection to the space in a way similar to how sound engineers tune the audio to the venue. By generating 3D point clouds of the actual space, our image alignment and soft edge blends are easier to calculate, sticking the projection onto the surfaces.”

David adds, “Two challenging surfaces in the production were hanging drapes with deep fullness. With OmniCal, we were able to model these with simple curved primitive in disguise, and then deform to fit the curtain, creating the desired effect from the original Dragone production.”

When asked about implementing disguise solutions to enhance The House of Dancing Water workflow, Karl Jenkins, Head of Lighting at Dragone said, “Our production has always been a pioneer of the use of moving head projection technology. Thanks to the newly implemented infrastructure from disguise, this has ultimately restored the delivery efficiency of the projections the show is famous for and has also future-proofed the entire production for years to come.”

Joe Kleimanhttp://wwww.themedreality.com
Raised in San Diego on theme parks, zoos, and IMAX films, InPark's Senior Correspondent Joe Kleiman would expand his childhood loves into two decades as a projectionist and theater director within the giant screen industry. In addition to his work in commercial and museum operations, Joe has volunteered his time to animal husbandry at leading facilities in California and Texas and has played a leading management role for a number of performing arts companies. Joe previously served as News Editor and has remained a contributing author to InPark Magazine since 2011. HIs writing has also appeared in Sound & Communications, LF Examiner, Jim Hill Media, The Planetarian, Behind the Thrills, and MiceChat His blog, ThemedReality.com takes an unconventional look at the attractions industry. Follow on twitter @ThemesRenewed Joe lives in Sacramento, California with his wife, dog, and a ghost.
Share
Facebook
Twitter
Linkedin
Email
Print
WhatsApp
Pinterest
ReddIt
Tumblr
Previous articleBusch Gardens Tampa Bay adds two new animal encounter experiences
Next articleLouisville Slugger Museum & Factory goes more in-depth with new tour designed by JRA