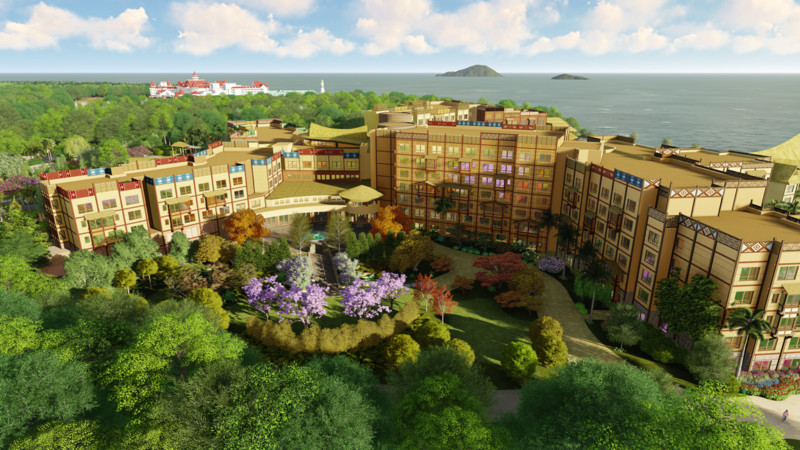 At Disney Explorers Lodge, guests are inspired to explore and dream as they are immersed in the adventures of intrepid explorers, with the motto “ad explorare et somniare” (to explore and dream). The seven-story Disney Explorers Lodge has 750 hotel rooms, each featuring an open sea view or a landscape view of one of the four lush themed gardens that exemplify the cultures of Asia, South America, Africa and Oceania.

Enfolding the four wings of the hotel, these gardens are all named after characters from beloved Disney and Disney•Pixar animated films. Kevin Garden, which has a South American theme, is named after the giant bird in “Up.” The Little Squirt Garden of Oceania celebrates the playful sea turtle from “Finding Nemo.” Named after the baby elephant from “The Jungle Book,” the Hathi Jr. Garden puts guests in the heart of Asia. The Rafiki Garden, which has an African Savannah theme, is named after the wise mandrill from “The Lion King.” Guests can also revel in the spirit of adventure by gazing into the Dreamer’s Spring or take a dip in the outdoor Rain Drop Pool.

“Hong Kong Disneyland is committed to investing in new offerings for our guests. Disney Explorers Lodge is not only a fantastic getaway for Disney guests, it’s also a one-of-a-kind hotel experience for those visiting the cosmopolitan city of Hong Kong,” said Samuel Lau, executive vice president and managing director of Hong Kong Disneyland Resort. “We can’t wait to share all the fun found in the four gardens, all-new restaurants and themed rooms. The best part is, these exotic adventures are just a stone’s throw from downtown, making it convenient for anyone seeking high-quality accommodation with a dash of Disney magic.”

“This brand new hotel really takes the resort experience at Hong Kong Disneyland Resort to another level entirely,” Lau continued. “There is always something for everyone here. The new hotel together with the park’s many new and amazing entertainment offerings have made the range of choices for guests even more dynamic.  This extra hotel capacity also greatly boosts the resort’s MICE accommodation options.”

Dining in the three restaurants of the new hotel is as epic an adventure as exploring the hotel grounds. A taste of ancient Chinese wisdom is served at Dragon Wind, where guests can savor signature delights from rural and classical provincial China, with culinary styles and layout inspired by the Five Elements. World of Color Restaurant brings together the tastes of new and old worlds using spices and herbs, as well as ancient and new cuisine with textures and flavors from across the seas, islands and continents. Chart Room Cafe is the place to kick back and enjoy casual dining. Guests can soak in the cafe’s peaceful and welcoming atmosphere while enjoying its selections of specialty coffee, continental breakfast, salads, freshly made sandwiches, made-to-order pastas and home-made gelato with delicious topping cream.

Expeditions are not complete without something special to remember them by The Trading Post is the best place in the hotel to find artifacts and memorabilia to celebrate a journey of “exploration and dreams.”

Disney Explorers Lodge in itself celebrates the golden age of exploration in the early 1920s, transporting guests to some of the most exotic corners of the world. The lodge displays artifacts and memorabilia—collected by the explorers over a lifetime of travel—in the hotel’s guest rooms, dining venues and other indoor and outdoor areas.

Joe Kleimanhttp://wwww.themedreality.com
Raised in San Diego on theme parks, zoos, and IMAX films, InPark's Senior Correspondent Joe Kleiman would expand his childhood loves into two decades as a projectionist and theater director within the giant screen industry. In addition to his work in commercial and museum operations, Joe has volunteered his time to animal husbandry at leading facilities in California and Texas and has played a leading management role for a number of performing arts companies. Joe previously served as News Editor and has remained a contributing author to InPark Magazine since 2011. HIs writing has also appeared in Sound & Communications, LF Examiner, Jim Hill Media, The Planetarian, Behind the Thrills, and MiceChat His blog, ThemedReality.com takes an unconventional look at the attractions industry. Follow on twitter @ThemesRenewed Joe lives in Sacramento, California with his wife, dog, and a ghost.
Share
Facebook
Twitter
Linkedin
Email
Print
WhatsApp
Pinterest
ReddIt
Tumblr
Previous articleMadame Tussauds Bringing King Kong and Skull Island to New York and London
Next articleIAAPA Asian Attractions Expo Returns to Singapore