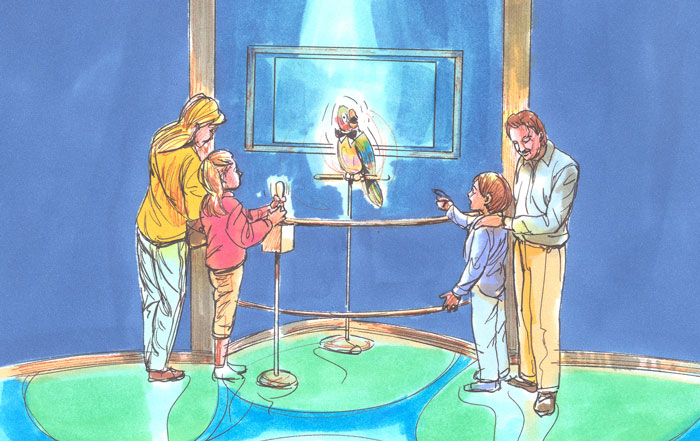 San Francisco, CA, USA (May 29, 2014) — The Walt Disney Family Museum announces the arrival of its very own Barker Bird—a replica of the Audio-Animatronics Barker Bird formerly positioned outside the entrance to Walt Disney’s Enchanted Tiki Room at Disneyland. In honor of the museum’s location in the Presidio of San Francisco, he has been named “Pepe del Presidio.”

This new interactive exhibit will be located in the 1964 New York World’s Fair and EPCOT Gallery and will showcase the mechanized magic of Audio-Animatronics technologies—brought to life with a working version of the bird Walt Disney employed to invite visitors at Disneyland into his landmark Tiki Room show. After a brief show and newly created film about the history of Audio-Animatronics, guests will be invited to use an authentic programming joystick to experience the fine art of figure animation for themselves.

Walt Disney once said of Audio-Animatronics, “it’s just another dimension in the animation we have been doing all our life.”

The new interactive exhibit—which will become a part of the museum’s permanent galleries on Friday, June 20—is a gift to the museum from Garner Holt Productions, Inc., the world’s largest creator of animatronic characters, and the primary animatronics provider for Disney theme parks.

Joe Kleimanhttp://wwww.themedreality.com
Raised in San Diego on theme parks, zoos, and IMAX films, InPark's Senior Correspondent Joe Kleiman would expand his childhood loves into two decades as a projectionist and theater director within the giant screen industry. In addition to his work in commercial and museum operations, Joe has volunteered his time to animal husbandry at leading facilities in California and Texas and has played a leading management role for a number of performing arts companies. Joe previously served as News Editor and has remained a contributing author to InPark Magazine since 2011. HIs writing has also appeared in Sound & Communications, LF Examiner, Jim Hill Media, The Planetarian, Behind the Thrills, and MiceChat His blog, ThemedReality.com takes an unconventional look at the attractions industry. Follow on twitter @ThemesRenewed Joe lives in Sacramento, California with his wife, dog, and a ghost.
Share
Facebook
Twitter
Linkedin
Email
Print
WhatsApp
Pinterest
ReddIt
Tumblr
Previous article
Falcon’s Fury Opening Delayed For Later in Summer
Next article
James Cameron Partners with Cirque du Soleil to Create Live Action “Avatar” Touring Show