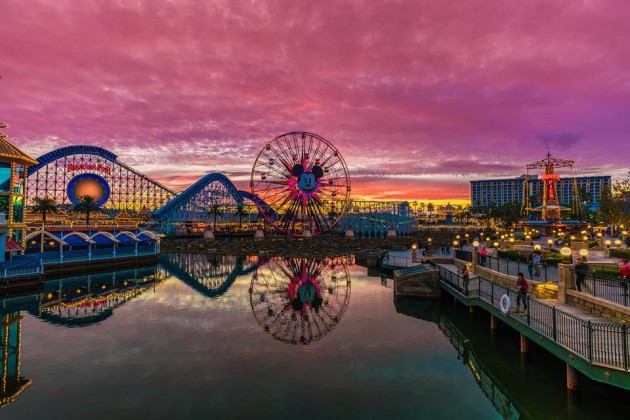 Anaheim, CA, USA (March 11, 2015) – A dynamic 24-hour party will kick off the summer and launch the Disneyland Resort Diamond Celebration, May 22-23, as guests enjoy the thrilling premieres of three, new nighttime spectaculars: the glittering “Paint the Night” parade and the groundbreaking “Disneyland Forever” fireworks show at Disneyland Park, plus the new presentation, “World of Color – Celebrate! The Wonderful World of Walt Disney,” at Disney California Adventure Park.

The all-day/all-night celebration will begin at 6 a.m. Friday, May 22, and will conclude 24 hours later at 6 a.m. Saturday, May 23, 2015 local time. The revelry will include dancing and special character encounters at locations in Disneyland and Disney California Adventure parks, along with enchanting Diamond décor throughout the resort and the exciting shows and attractions that bring guests back year after year. The Disneyland Resort invites guests of all ages to kick off the summer travel season in Southern California, celebrating 60 years of magic at a resort that remains forever young.

The 24-hour party is just the beginning of the summer fun at Disney Parks on both coasts.

At Disneyland, in addition to the spectacular nighttime parade and fireworks, guest will enjoy the daytime “Mickey’s Soundsational Parade” and the classic after-dark “Fantasmic!” show on the Rivers of America in Frontierland and New Orleans Square. Glistening diamond-themed décor adds extra sparkle to Sleeping Beauty Castle, while Anna and Elsa from the hit Disney animated feature “Frozen” appear in a playfully comic retelling of their story on the Fantasy Faire stage. Disneyland also features more than 60 rides and attractions, including Space Mountain, Pirates of the Caribbean and “it’s a small world,” to delight guests of all ages.

At Disney California Adventure, the new “World of Color – Celebrate!” show continues nightly throughout the summer along with the new “Mad T Party Diamond Celebration,” plus “Pixar Play Parade,” “Disney’s Aladdin – A Musical Spectacular” and all the favorite attractions throughout the park, including Radiator Springs Racers in Cars Land, the Twilight Zone Tower of Terror in Hollywood Land and the California Screamin’ roller coaster in Paradise Pier.  The “Frozen” fun is extended at Anna & Elsa’s Royal Welcome, where guests have a chance to meet the sisters, who also make appearances in the “For the First Time in Forever” sing-along.

‘Coolest Summer Ever’ at Walt Disney World Resort in Florida

Walt Disney World Resort in Florida will have its own 24-hour* event at the Magic Kingdom, May 22-23, as it inaugurates the “Coolest Summer Ever,” hosted by Olaf, the summer-loving snowman from “Frozen.”  Throughout the summer, guests will find cool thrills across Walt Disney World Resort, including cool attractions in all four theme parks, cool characters, cool water parks, plus Frozen Summer Fun at Disney’s Hollywood Studios.

Joe Kleimanhttp://wwww.themedreality.com
Raised in San Diego on theme parks, zoos, and IMAX films, InPark's Senior Correspondent Joe Kleiman would expand his childhood loves into two decades as a projectionist and theater director within the giant screen industry. In addition to his work in commercial and museum operations, Joe has volunteered his time to animal husbandry at leading facilities in California and Texas and has played a leading management role for a number of performing arts companies. Joe previously served as News Editor and has remained a contributing author to InPark Magazine since 2011. HIs writing has also appeared in Sound & Communications, LF Examiner, Jim Hill Media, The Planetarian, Behind the Thrills, and MiceChat His blog, ThemedReality.com takes an unconventional look at the attractions industry. Follow on twitter @ThemesRenewed Joe lives in Sacramento, California with his wife, dog, and a ghost.
Share
Facebook
Twitter
Linkedin
Email
Print
WhatsApp
Pinterest
ReddIt
Tumblr
Previous articleCedar Fair Extends Agreement with acesso
Next articleHistoric Riveria Hotel to Make Way for Las Vegas Convention Center Expansion