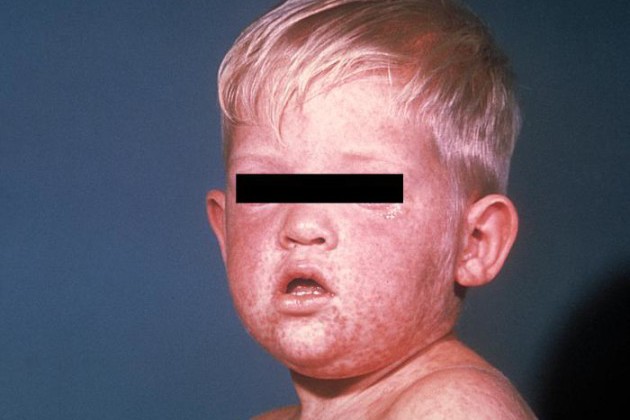 ABOVE: Photo courtesy Centers for Disease Control and Prevention/California Department of Public Health

Sacramento, CA, USA (April 17, 2015) — The California measles outbreak that began in December 2014 is over, it was announced today by Dr. Karen Smith, director of the California Department of Public Health (CDPH) and state health officer.

No new outbreak-related measles cases have been reported to CDPH for two 21-day incubation periods (42 days), allowing public health officials to declare the outbreak that infected 131 Californians to be over.

“We are pleased this outbreak is over, but caution that measles can be reintroduced in California at any time when an infected person brings it to the state,” said Dr. Smith. “The best defense for protection against the highly infectious measles is vaccination.”

Since December 2014, 131 measles cases have been reported to CDPH that are likely linked to this outbreak. Measles is not endemic in California, but can circulate when a contagious, infected person enters the state and exposes others. Forty-two cases were directly linked to an initial exposure in December at Disneyland or Disney California Adventure Park in Anaheim, California. Additional cases were secondary to those.

Forty-four other cases have an unknown exposure source. It is possible, but unlikely, that some of the cases with unknown exposure sources are unrelated importations of the B3 strain into the state. Because of their epidemiologic and genotyping links, CDPH considers them part of the same outbreak, although the B3 strain is also known to circulate in a number of other countries and additional importations during the outbreak were possible. While this outbreak is over, it does not mean that there will not be future measles cases reported in California.

People can be infectious for four days prior to developing the rash associated with measles and may feel well enough to be out and about, potentially exposing others. Because measles is a highly infectious, airborne disease, public health officials are pleased to have contained the spread of this outbreak to a relatively few individuals, and that no related deaths occurred.

“Government at all levels – federal, state and local – worked together to educate health care providers and the public about potential exposures and the risks of the disease. Prompt investigation of cases, interviewing hundreds of contacts of infected people, vaccinating hundreds of at risk people, and increasing awareness among health care providers about measles, helped to control this outbreak,” said Dr. Smith.

The public health investigation into this measles outbreak was significant. Thousands of measles contacts in California were identified. Exposures occurred in public places including health care settings, schools, malls, and airports. Babies and pre-school children, pregnant women, schoolchildren of all ages, health care workers, teachers, and other adults were exposed to measles during this outbreak. Lab tests in state and local laboratories were conducted for over 1,000 patients.

Measles symptoms typically begin with fever, cough, runny nose and red eyes, and within a few days a red rash appears, usually first on the face and then spreading downward to the rest of the body.

Two doses of measles-containing vaccine (MMR vaccine) are more than 97 percent effective in preventing measles. If you are unsure of your vaccination status, check with your doctor to have a test to check for measles immunity or to receive vaccination.

The California measles patients in this outbreak reside in 14 local health jurisdictions (Alameda, Los Angeles, Marin, Merced, Orange, Riverside, San Bernardino, San Diego, San Mateo, Santa Clara, Solano, and Ventura counties and the cities of Long Beach and Pasadena). Patients range in age from six weeks to 70 years. Vaccination status is documented for 81 of the 131 cases. Of these 81, 56 (70 percent) were unvaccinated, and 25 had received one or more doses of MMR vaccine. In addition to the 131 measles cases in the outbreak, there were an additional five unrelated measles cases reported during the same time period.