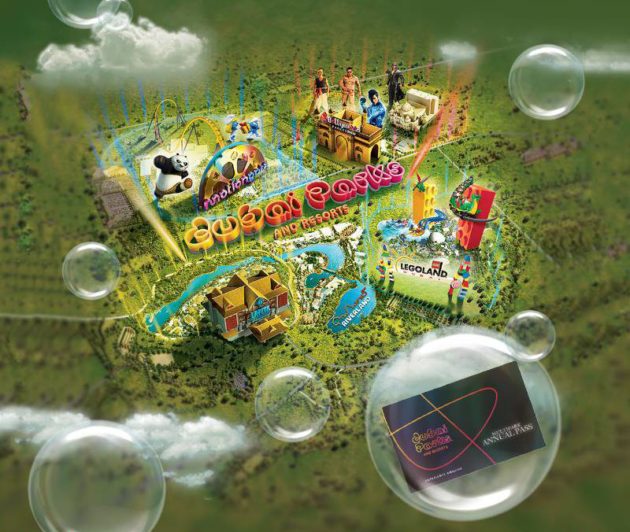 Dubai, UAE – Dubai Parks and Resorts has announced that the region’s largest theme park destination will open its gates to the public on 31st October, 2016.

This unique destination will be comprised of three theme parks – Bollywood Parks™ Dubai, MOTIONGATE™ Dubai, and LEGOLAND® Dubai, together with LEGOLAND® Water Park.  The destination will also include Riverland™ Dubai, a themed retail, dining, and entertainment experience, along with the Lapita™ Hotel, a Polynesian-themed family resort. The entire range of products and prices will be announced soon.

“This has been a long-time coming and I can’t say enough about how excited we are to welcome our guests to the destination to Experience Amazing.,” said Raed Kajoor Al Nuaimi, CEO of Dubai Parks and Resorts. “Nothing of this magnitude has ever been done before, and we look forward to offering our guests close to 100 unforgettable rides, attractions and experiences.  As the largest entertainment destination in the region, Dubai Parks and Resorts will create jobs in Dubai, support the UAE’s tourism vision and grow the family leisure industry in the region.”

Annual passes are currently on sale at dubaiparksandresorts.com, and daily passes will be announced soon.

Bollywood Parks™ Dubai is the first-ever Bollywood themed park in the world, providing guests with a flavour of Bollywood and Indian culture through immersive rides, delicious food, stunning live performances and extravagant entertainment.

Bollywood Parks™ Dubai will feature cinematic rides and attractions for families and visitors of all ages to experience recreations of some of Bollywood’s biggest blockbusters such as Don, Lagaan, Sholay, Krrish and RA.One, through state-of-the-art 3D and 4D systems, as well as a stunning  stunt show, live performances and hot sets based on the Dabangg, Rock On!! and Zindagi Na Milegi Na Dobara.

No trip through Bollywood would be complete without the one-of-a-kind Bollywood performances. Two hundred dance performers will be regularly stunning guests with amazing, intricate routines with up to 20 live shows across five stages; Rock On!!, Crossroads, Mumbai Express, Rangmanch and Stars on Steps.

At the heart of Bollywood Parks™ Dubai lies its crowning jewel, the magnificent Rajmahal Theatre, an 850-seat opulent theatre that will host a separately ticketed Broadway-styled Bollywood musical several times a week, the first of its kind in the region. To complement the grand stage in the Royal Plaza zone, the Mughal-e-Azam restaurant will serve as the perfect venue for a pre-theatre dinner and will offer royal ‘shahi’ cuisine prepared by culinary artists.  During the day, the zone’s Stars on Steps Stage will showcase a special performance paying tribute to Bollywood through the ages.

Visitors will also be delighted by the colorful Bollywood memorabilia available across the eight retail stores and stand-alone carts dotted around the park.

MOTIONGATE™ Dubai, the largest Hollywood-inspired theme park in the Middle East, unites three legendary film studios for the first time within one theme park – Sony Pictures Studios including the Smurfs, DreamWorks Animation and Lionsgate. Visitors will be given the chance to go beyond the screen and immerse themselves in the magic of Hollywood, ensuring fun for the whole family and creating memories to last a lifetime.

MOTIONGATE™ Dubai is the largest of the three theme parks and whilst a significant portion of the park will premiere on 31st October, work on some of the attractions will be ongoing for a couple of months to create the very best experience for guests.

In the Sony Pictures Studios Zone, guests can blast ghosts in the exciting Ghostbusters dark ride, ride their own Black Beauty aboard The Green Hornet: High Speed Chase roller coaster or freefall from the 58m Zombieland: Blast Off tower.  In Smurfs Village Zone, families will be invited into the charming mushroom-capped world of the loveable Smurfs, featuring five exciting rides and attractions including the world’s first Smurfs-inspired roller coaster, Smurfs Village Express.  For live entertainment, fans of music will love Step Up Dubai, All In – a high energy hip hop show inspired by the popular film franchise, Backlot Beat, a pop-infused musical show or the dancing Ghostbusters band.

The fully-indoors DreamWorks Zone featuring 12 exciting rides and attractions including roller coasters, dark rides and interactive adventure areas, plus five live entertainment experiences. Here, guests will be transported into completely immersive lands inspired by Shrek, Kung Fu Panda, Madagascar and How To Train Your Dragon, bringing their favourite films and characters to life like never seen before. In the Lionsgate Zone, guests will experience the world’s first theme park attractions inspired by The Hunger Games, showcasing a thrilling roller coaster and an exciting 3D motion simulator.

With added movie-based dining, entertainment and shopping, MOTIONGATE™ Dubai will be the theme park of choice for non-stop action, cinematic adventure and family fun, year round.

LEGOLAND® Dubai is the ultimate world of year-round LEGO®-themed adventures for families with children aged 2-12. LEGOLAND will feature over 40 interactive rides, shows and attractions and 15,000 LEGO model structures made from over 60 million LEGO bricks.  It is designed to provide a full day’s interactive, theme park experience.

LEGOLAND will feature six themed lands, each unique in their experience, entertainment and educational offering, including:

LEGO CITY, where children can indulge in a range of playful learning opportunities including flying a plane at the LEGO City airport, steering a boat at the boating school, or earning a LEGOLAND driving license at the driving school.

KINGDOMS, where knights and princesses can explore a medieval land and conquer the exhilarating Dragon coaster, which takes you on a journey through the King’s castle full of vibrant LEGO models depicting the era.

IMAGINATION, the perfect area for every LEGO fan to enjoy, spending hours playing, racing LEGO cars or taking advantage of the Master Builder Academy. Toddlers and small children will enjoy DUPLO® Valley while all will enjoy the Kid Power Towers to get a great view of the entire park before a gentle “free-fall” ride to the bottom.

ADVENTURE, for young explorers seeking thrilling antics while enjoying a captivating Submarine Adventure, Wave Racers that power through waves and dodge water blasts as well as an exciting escapade through ancient temple ruins to recover a pharaoh’s stolen treasure.

MINILAND, the heart of LEGOLAND, made up of over 20 million LEGO bricks featuring Dubai’s iconic skyline and key landmarks from around the Middle East and international destinations. The MINILAND at LEGOLAND  will be the first ever indoor air-conditioned MINILAND at a LEGOLAND park and will also include Build a City where guests can find a 10 metre play table with white LEGO bricks enabling them to create an ever changing city skyline.

FACTORY is where LEGO bricks are produced and guests can receive a personal brick fresh from the casting line. Factory is also home to The BIG shop, the largest selection of LEGO retail items in the region, including the full range of LEGO products, exclusive sets and LEGOLAND souvenirs.

LEGOLAND Water Park is located adjacent to LEGOLAND and is the only water park in the region designed specifically for kids aged 2-12 and their families.

The water park will feature more than 20 water slides and attractions, each offering a different and fun-soaked experience including the highly anticipated Build-A-Raft River where children of all ages can customise their own raft using LEGO soft bricks, before floating down a lazy river with views of the entire park.  Along with the Build-A-Raft River, LEGOLAND Water Park will offer interactive options such as Build-A-Boat where children can build using countless LEGO bricks before testing their design against the flow of water in a 10 metre river. 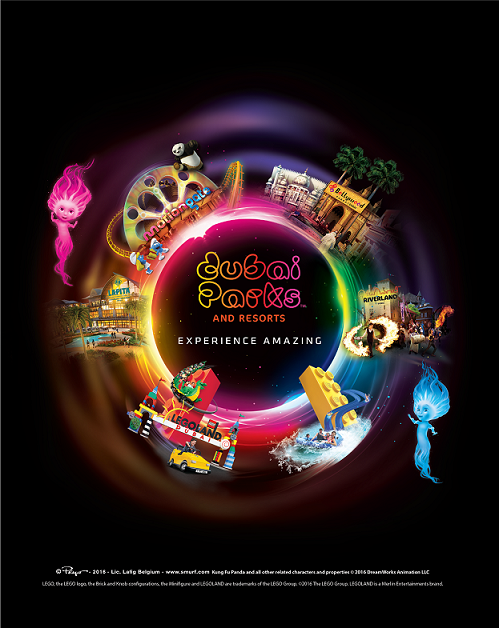 Riverland™ Dubai, a uniquely themed retail and dining destination at the heart of Dubai Parks and Resorts. This themed dining, retail and entertainment destination is open to everyone with or without a ticket to the adjoining parks, and its unique location means it will be experienced by every visitor to the parks.

Riverland has four themed zones that offer a fascinating glimpse into some of the greatest eras of the past – from 1950s America at The Boardwalk to medieval France at The French Village, colonial India at India Gate and the 19th century-themed Peninsula.  With more than 50 shops and restaurants and a range of entertainment from street performances to festivals and concerts there is something for friends, families and couples to enjoy at Riverland.

The Lapita™ Hotel is a Polynesian themed family hotel with 501-rooms and three villas and is part of the Marriott Autograph® Collection.  The hotel will bring an exciting, new and fresh approach to family vacations and is custom tailored to the needs of families, including adventure playgrounds, kids/teen and adult fun pools, child friendly and designed F&B outlets, family spas as well as spaces and facilities designed for adults to relax and enjoy.

Joe Kleimanhttp://wwww.themedreality.com
Raised in San Diego on theme parks, zoos, and IMAX films, Joe Kleiman would expand his childhood loves into two decades as a projectionist and theater director within the giant screen industry. In addition to his work in commercial and museum operations, Joe has volunteered his time to animal husbandry at leading facilities in California and Texas and has played a leading management role for a number of performing arts companies. Joe has been News Editor and contributing author to InPark Magazine since 2011. HIs writing has also appeared in Sound & Communications, LF Examiner, Jim Hill Media, and MiceChat. His blog, ThemedReality.com takes an unconventional look at the attractions industry. Follow on twitter @ThemesRenewed Joe lives in Sacramento, California with his fiancé, two dogs, and a ghost.
Share
Facebook
Twitter
Linkedin
Email
Print
WhatsApp
Pinterest
ReddIt
Tumblr
Previous articleIAAPA European Attractions Show 2016 Brings Europe’s Premier Market Place for European Attraction Industry to Barcelona
Next articleLCI Productions Tells the History of Early Man and Cox’s Cave through Unique AV Installation