Worlds First Dynamic Building to Celebrate the Sport of Football 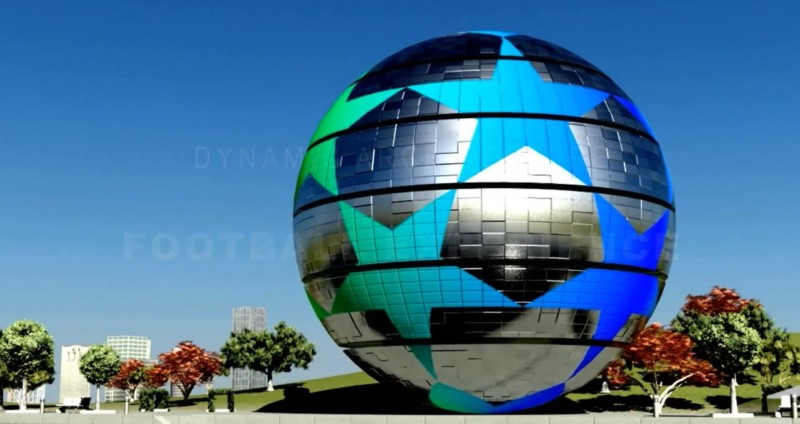 Rio de Janeiro, Brazil / PRNewswire / — The world’s first entertainment center dedicated to football will be built in Rio de Janeiro. It will be constructed in the form of a huge football and be in continuous motion, changing shape constantly.
This spherical-shaped building will be 50 meters high with 9 floors, each rotating separately in both directions and at changing speeds to bring life to the building.The Dynamic Football Experience Company and the Navalmare Group unveiled the project today, announcing that they intend to begin construction of this unique building in the world’s capital city of football after the FIFA World Cup.

This is the football version of the proposed Dynamic Tower, designed by Florentine architect Dr. David Fisher, who is considered to be the “Father of Dynamic Architecture”, published today for the first time.

The building includes a fully interactive football museum and a floor dedicated to virtual and augmented reality football games, where through a hologram system originally developed with NASA technology, visitors will be able to play alongside Pele and Neymar and score goals.

Another floor will offer a virtual stadium, where visitors will sit facing a giant 360 degree screen and feel as if they are at the Santiago Bernabeu Stadium in Madrid, watching a game against Barcelona in real time.

Other floors will include restaurants and shops, all dedicated to football, a special gym, and an educational space.

A scale model of the building produced by DTM of Modena, Italy, Ferrari’s space engineering company, will be presented at the end of the month in one of Europe’s most beautiful cities.

Among the engineering and technology suppliers involved are WSP of New York, the German giants Bosch and Siemens, Exergia Brasil, SGM (the LED lighting company of Denmark), and Navalmare, an Italian builder of ships and offshore stations already active in Brazil.

Following the Rio de Janeiro project, the Dynamic Group, which holds the international rights for rotating buildings, and Navalmare intends to build these dynamic football-shaped buildings in Italy and supply them to many cities around the world. More of these giant footballs in motion, offering fans a “24/7” football experience, will be built in London, New York, Madrid, Milan, Barcelona, Jakarta and many others cities.

Tivoli plans for a foodie Summerfest, opening gates on March 27