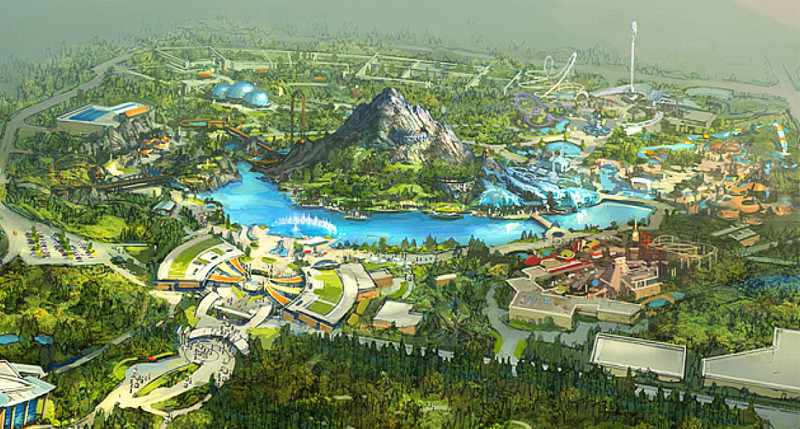 Houston, TX, USA — Heather Alexander reports in the Houston Chronicle on developers’ plans to double the size of the planned EarthQuest theme park and resort:

“Developers planning a 500-acre family theme park with life sized dinosaurs north of Houston say they are in discussions to close on a new plot of land twice the size of the original plot.

“Los Angeles-based Contour development won’t confirm exactly where the new site for the famed EarthQuest park is until the deal is finalized, but they do pinpoint East Montgomery County as the basic area.

“‘We are working like crazy to get all the little pieces in place,’ said Contour President Chris Brown.  ‘This site is more than twice the size of the one we had before.’

“Brown said the previous deal for land alongside U.S. 59 at New Caney fell through because too many restrictions were placed on investors who want to build a raft of supporting infrastructure in the form of hotels and other services for potential visitors.

“‘The investors want freedom to develop all around the park, which would be even more profitable than the park itself,’ said Brown.”

Joe Kleimanhttp://wwww.themedreality.com
Raised in San Diego on theme parks, zoos, and IMAX films, InPark's Senior Correspondent Joe Kleiman would expand his childhood loves into two decades as a projectionist and theater director within the giant screen industry. In addition to his work in commercial and museum operations, Joe has volunteered his time to animal husbandry at leading facilities in California and Texas and has played a leading management role for a number of performing arts companies. Joe previously served as News Editor and has remained a contributing author to InPark Magazine since 2011. HIs writing has also appeared in Sound & Communications, LF Examiner, Jim Hill Media, The Planetarian, Behind the Thrills, and MiceChat His blog, ThemedReality.com takes an unconventional look at the attractions industry. Follow on twitter @ThemesRenewed Joe lives in Sacramento, California with his wife, dog, and a ghost.
Share
Facebook
Twitter
Linkedin
Email
Print
WhatsApp
Pinterest
ReddIt
Tumblr
Previous article
Tennessee Aquarium Introduces Mobile App
Next article
Christie to Introduce 4K Laser Projection at CinemaCon and NAB Show