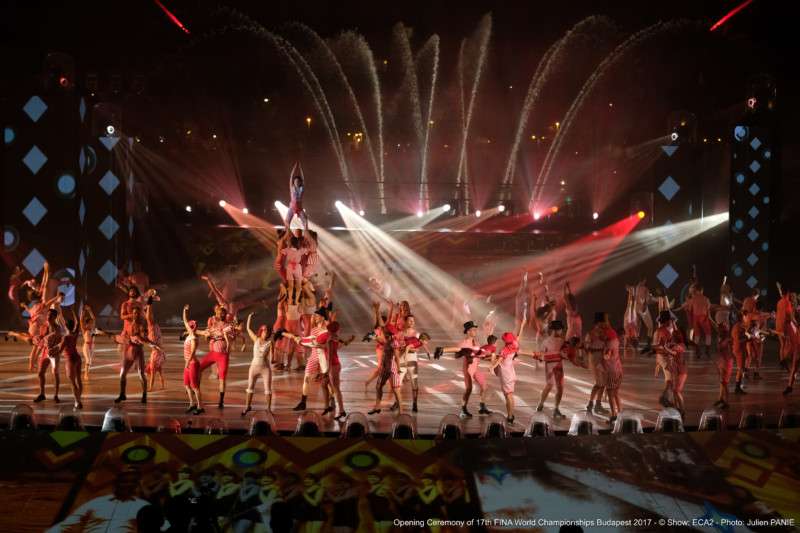 The mission: to kickoff aquatic sports’ most prestigious biennial event with a splash to be felt all around the world, to create a live spectacle that would be equally stunning to the audience onsite as it would be to television and online viewers. The place: one of Europe’s most charming capitals, Budapest, with its emblematic Buda Castle perched majestically over the Danube River.

The challenges facing the team included improving on the timeless perfection of such a historic city, already recognized as a UNESCO World Heritage site and how to plug such a monumental technical set-up into the heart of a city that was never intended as an entertainment venue. 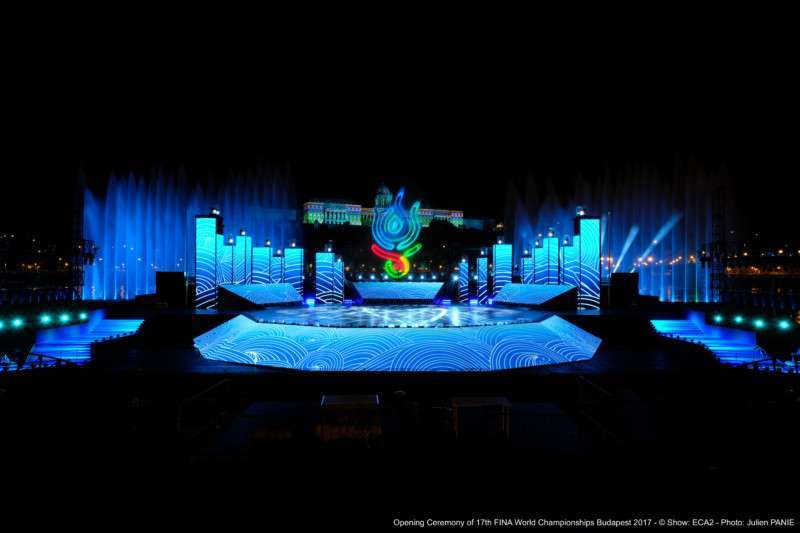 Faced with the task, the teams got to work on the theme: The Memory of Water. Creative talent from Müpa Budapest took inspiration from the history of Hungary and their city, drawing upon the eternal river Danube as a story thread of continuity and unstoppable energy. The connection was made between the element of water and Humankind, to excite anticipation for all the epic aquatic sports that would soon unfold. 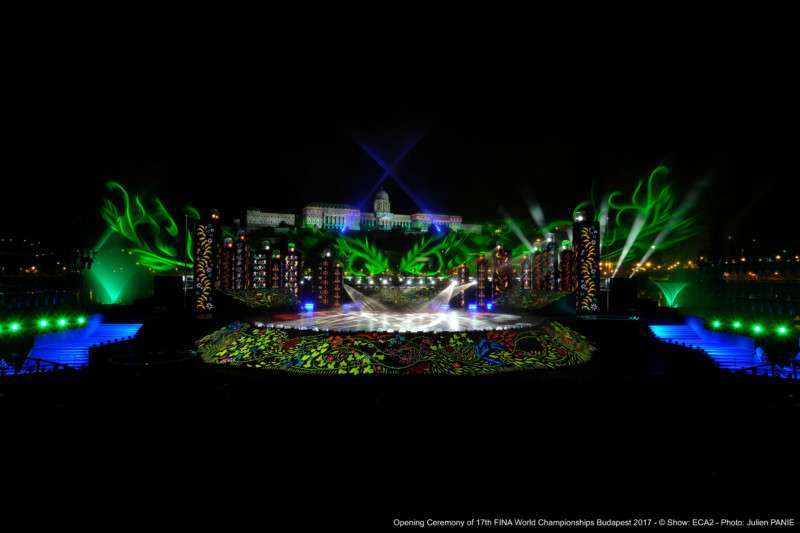 For this one night only, the Danube, the Buda Castle, and the Chain Bridge became a single vast theater, where projected images told thrilling tales of old, and echoed through the excitement of today’s sporting “rendez-vous”. This was a first for an Opening Ceremony, where a far-off cityscape defined the theater limits, and offered a monumental depth of field for video projection and special effects. Everything emanated from a floating stage right on the river, occupying an overall area twice as large as an Olympic stadium. The floating set-up itself covered the equivalent of 3 football fields and presented its own special challenges: despite high river traffic, the current and tide, projected video content being projected onto structures had to cleverly compensate for any movement.

* A floating set-up covering 8,000 m2 on the Danube (equivalent of 3 football fields)

Team involved in the project: 200 people.
Executive Production by ECA2

Joe Kleimanhttp://wwww.themedreality.com
Raised in San Diego on theme parks, zoos, and IMAX films, InPark's Senior Correspondent Joe Kleiman would expand his childhood loves into two decades as a projectionist and theater director within the giant screen industry. In addition to his work in commercial and museum operations, Joe has volunteered his time to animal husbandry at leading facilities in California and Texas and has played a leading management role for a number of performing arts companies. Joe previously served as News Editor and has remained a contributing author to InPark Magazine since 2011. HIs writing has also appeared in Sound & Communications, LF Examiner, Jim Hill Media, The Planetarian, Behind the Thrills, and MiceChat His blog, ThemedReality.com takes an unconventional look at the attractions industry. Follow on twitter @ThemesRenewed Joe lives in Sacramento, California with his wife, dog, and a ghost.
Share
Facebook
Twitter
Linkedin
Email
Print
WhatsApp
Pinterest
ReddIt
Tumblr
Previous articleAV Stumpfl Curve Projection Screen Brings Panoramic View of Kazan to City Panorama
Next articleDiscovery Cove Introduces Shark Swim