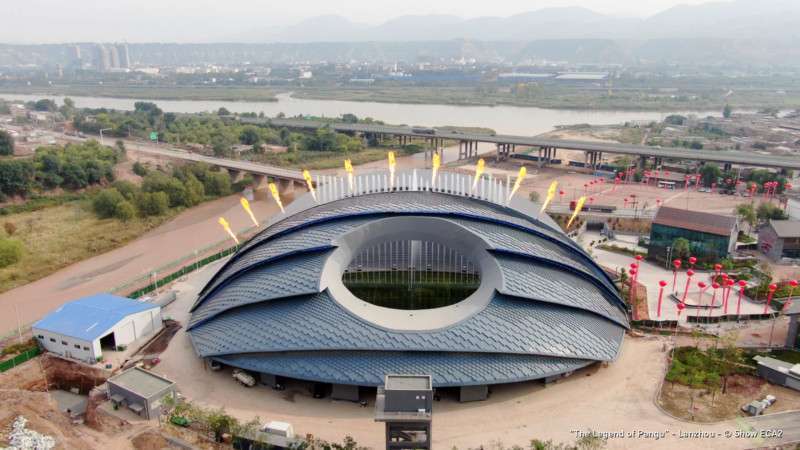 ECA2’s Legend of Pangu shines on the desert’s edge

ABOVE: The Legend of Pangu show takes place in a custom-built theater that is visually intriguing and appealing. All photos courtesy of ECA2

On the banks of the Yellow River, about an hour northwest of Lanzhou in China’s landlocked Gansu Province, an iconic structure, unlike any ever built, rises from the dusty desert soil. Picture an egg, sliced in half, with a heart-shaped opening splitting the rooftop in two. A second hole resembling a huge eye is centered along one side, providing a view of the steep mountainside behind.

The gray-blue tiles on its exterior are reminiscent of the roofs of nearby village homes that have survived hundreds of years since the Ming and Qing dynasties, yet they also resemble a bird’s feathers and its folded wings.

Christened on a chilly evening in late autumn, the building is a testament to yin-yang duality. It is simultaneously an outdoor amphitheater and indoor cinema; the steel, concrete and aluminium shell is both the site and screen for a new multimedia spectacular.

Thirty months in the making, ‘The Legend of Pangu’ is the latest venture of French showmaker ECA2, which has teamed up with a state-owned development company called Gansu Xirong Cultural Tourism to produce a 26-minute sensory extravaganza that recounts a traditional Chinese tale about the creation of the universe.

The venture is, without question, ECA2’s biggest project, at least in physical terms. Thirty Christie projectors broadcast animated video onto a 2,800 square meter projection screen curved in two dimensions. A 960-sqm cascade screen – touted as the “world’s largest projection surface on a permanent and single waterscreen” – is more than twice the size of the inaugural version introduced at The Big O seven years ago in Yeosu Korea as centerpiece of the world expo.

“It was a great challenge. In terms of planning and coordination, it was a huge work to achieve,” says ECA2 chairman JeanChristophe Canizares. “This is certainly our most complex project. We put our heart and our energy in it, and seeing it now makes us very, very proud.”

When the god Pangu’s animated axe hits the water in the theater’s main pool, for example, robotic focus jets and pressurized geysers create the impression that the axe has split the water in two.

The scope of the project and shape of the building presented ECA2 with several unique challenges. Top of the list was how to deploy a classic ECA2 device, the waterscreen, in a structure with no flat surfaces.

Challenge: How to project high-definition video onto a flat, 40-meter-high waterscreen, when every part of the building is curved. “The water should fall vertically, but the equipment is on a double-curved line,” explains the show’s chief architect and stage designer Chengcheng Chi.

Solution: The waterscreen has 11 segments, each with a unique joint. “The angle is never the same,” Chi explains. “If there’s even minor construction error, the water cascade will not work. Every plate to fix the waterscreen must be in exactly the right place in 3-D space.”

Challenge: Ensure that the sound quality is ‘as good as concert hall’ without any sound reflection, in a curved theater. Curves famously produce echoes, though; just ask a visitor to the US Capitol Rotunda or Beijing’s Temple of Heaven. Plus, every surface in the ECA2 theater would need to be fireproofed and weatherproofed to withstand the show’s pyrotechnics and water effects.

Solution: A multi-layered inner ceiling with perforated metallic panels, which are made for sound to pass through. Working with the acoustic engineers at Holland’s Peutz Group, ECA2 also identified a thin, tough, patented fabric called Soundmesh G8 that absorbs sound by “breaking the soundwave down to smaller components. It then traps and dissipates the soundwave within the spacer behind it.”

“We had to discover, with the acoustic engineers at Holland’s Peutz Group a way to avoid any sound reflection anywhere,” explains the show’s technical director Clément Rabréaud. “For a venue with such a shape, the sound is really, really incredible. It’s super creative.”

Challenge: The roof has a large oval opening that represents the sun and moon, and also provides a view of the mountainside behind the theater. As the show was being developed, artistic director Olivier Ferracci asked the design team if they could “close the hole” at key points during the storytelling. “How to close the hole?” Chi replied. “I told him we need some magic to do it.”

Solution: A “robotic magic screen.” Chi’s solution was to hang a 30-meter waterscreen from the roof. An attached motor enables the screen to rotate 55 degrees. “The waterscreen closes the form of the eye perfectly,” Chi explains. When video is projected on it, the hole disappears, becoming part of the projection screen.

Challenge: Ensure the show is never down and video projection over 3,760 square meters is crystal-clear, while minimizing the time required to calibrate 20 30k Christie Boxer projectors.

Solution: An automatic calibration device, deployed for the first time. The device, developed for the Lanzhou show in collaboration with Modulo Pi, maps one projector on top of another and tests the sequence. “This is totally revolutionary technology,” says Rabréaud. It takes just 13 minutes to run, which means that if a projector ever needs to be replaced, the whole system is back in focus quickly.

Most ECA2 productions are in outdoor theaters. The presence of a roof at the Lanzhou show encouraged the company to develop and deploy new effects, such as the “jet fog” that is created by 54 low pressure nozzles. “It’s a very thin water element that falls from the roof,” explains ECA2’s Julien Causeret. “You can’t even see it. It enables us to create atmospheric 3D effects with a laser, which is quite useful for the depth of the effects.”

For the first time, ECA2 is also deploying high-end color laser projectors and blue laser diodes, the latter of which are situated around the main pool. Laser projection technology has recently become more affordable. While they are still more expensive than a standard projector, they consume about 30% less power and can generate savings over the lifespan of a project. The laser projectors “bring a sharpness in the image and more brightness,” says Canizares, who adds that their quality is assured for at least 10 years, possibly longer.

All of ECA2’s special effects are developed in-house and tested practically at scale. Many of the innovations, such as the new 3D robotic fountain jets, are produced in collaboration with ECA2 sister company, Crystal Fountain.

Produced for a local Chinese audience

The Legend of Pangu cost 14 million euros to produce, not counting construction of the 1500-seat theater or related infrastructure, and is part of a 60 million euro cultural tourism project that sits on Chinese president Xi Jinping’s One Belt, One Road initiative. The theater is located next to the recently renovated town of Hekou, which welcomes thousands of domestic tourists to taste its wood-fired spicy hot pots and tour the ancient residences. Hotels and a theme park are in the works as well.

The storyline features an old man telling his grandson about the Chinese god Pangu, who created the sky and separated it from the Earth, over tens of thousands of years. He also tells the boy about the origins of the Silk Road, which passes through Lanzhou. Every detail, from the shape of his pipe to the design of palaces along the ancient trade routes, was researched to reflect local traditions.

The Legend of Pangu’s inaugural run, which debuted just in time for the People’s Republic of China’s 70th anniversary celebrations, was less than one month. The show is closed for the winter months and is expected to reopen in March. • • •

Michael Switow ([email protected]com) is the co-author of Taming the Mouse , which explores how Ocean Park Hong Kong fought for survival – and thrived – in the face of competition from Hong Kong Disneyland. A Singapore-based writer and broadcaster, Michael has been shaping top business stories across Asia-Pacific for more than 20 years. He is also the founder of WOW Asia (wow-asia.com), which provides insights about the Asian attractions industry and conversations with the leaders that drive them.