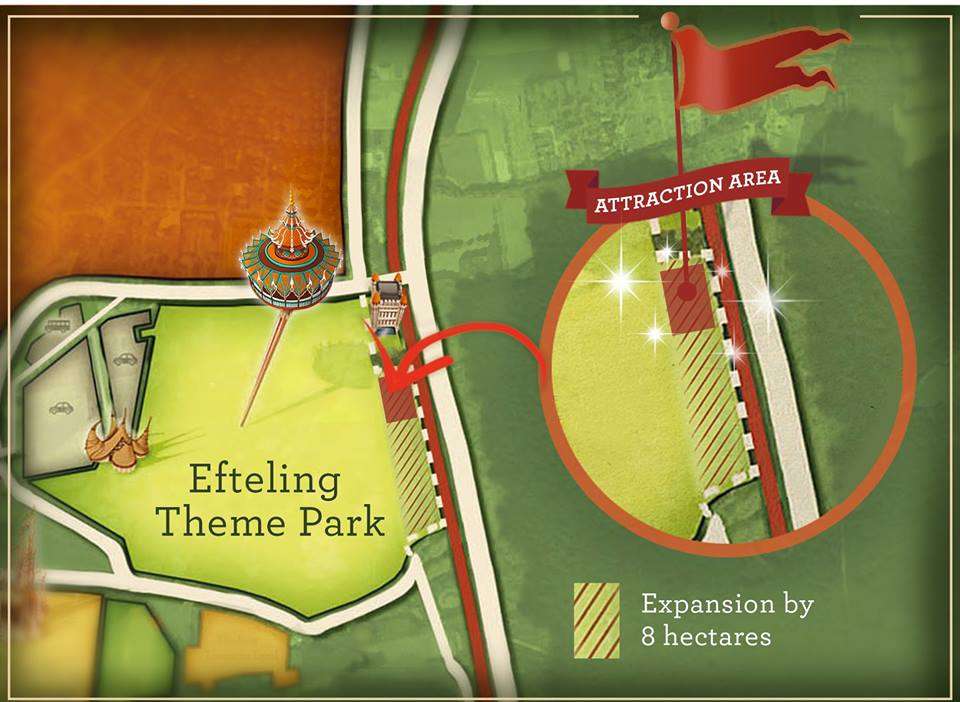 Efteling has announced that it is submitting an application to expand by eight hectares and add a new attraction in 2020.

The expansion is described in the draft development plan ‘World of Efteling 2030’ and involves enlarging the eastern side of the park. The municipal council is expected to sanction the development plan this summer, while Efteling has requested to advance one section in order to start preparing the land for the first part of the project (covering about three hectares).

After years of careful planning and working closely with the municipality of Loon op Zand, the province of North Brabant, local residents and other stakeholders,  Efteling has submitted a formal request concerning the planned area,  thereby making the application public knowledge.

According to Fons Jurgens, President and CEO Efteling, “We are asking the municipality for additional time for construction. This is the first time in a long time that Efteling is planning to move its borders. It is both a historic moment for us, as well as a challenge. More time is needed to prepare and construct an attraction. Ideally, we would like to welcome our guests to the new attraction located in the first section of the new site in 2020. The additional construction time we are requesting now will be much needed.”

Efteling will announce further details of the attraction it is planning to create as well as what the new attraction will look like at a future date.

Efteling opened in 1952 as a sports and recreation park, with the Fairytale Forest as its main attraction illustrating ten traditional fairytales. In the early 80s, the park grew to add new and larger attractions to appeal to a wider demographic. While the theme park resort has continued to grow over the years to become one of Europe’s biggest theme parks, this latest development plan will be Efteling’s first significant expansion into new land for many years.

Joe Kleimanhttp://wwww.themedreality.com
Raised in San Diego on theme parks, zoos, and IMAX films, InPark's Senior Correspondent Joe Kleiman would expand his childhood loves into two decades as a projectionist and theater director within the giant screen industry. In addition to his work in commercial and museum operations, Joe has volunteered his time to animal husbandry at leading facilities in California and Texas and has played a leading management role for a number of performing arts companies. Joe previously served as News Editor and has remained a contributing author to InPark Magazine since 2011. HIs writing has also appeared in Sound & Communications, LF Examiner, Jim Hill Media, The Planetarian, Behind the Thrills, and MiceChat His blog, ThemedReality.com takes an unconventional look at the attractions industry. Follow on twitter @ThemesRenewed Joe lives in Sacramento, California with his wife, dog, and a ghost.
Share
Facebook
Twitter
Linkedin
Email
Print
WhatsApp
Pinterest
ReddIt
Tumblr
Previous articleInPark Presents the Top 17 Stories of 2017
Next articleAngus Jenkins Headed to Six Flags from Chance Rides