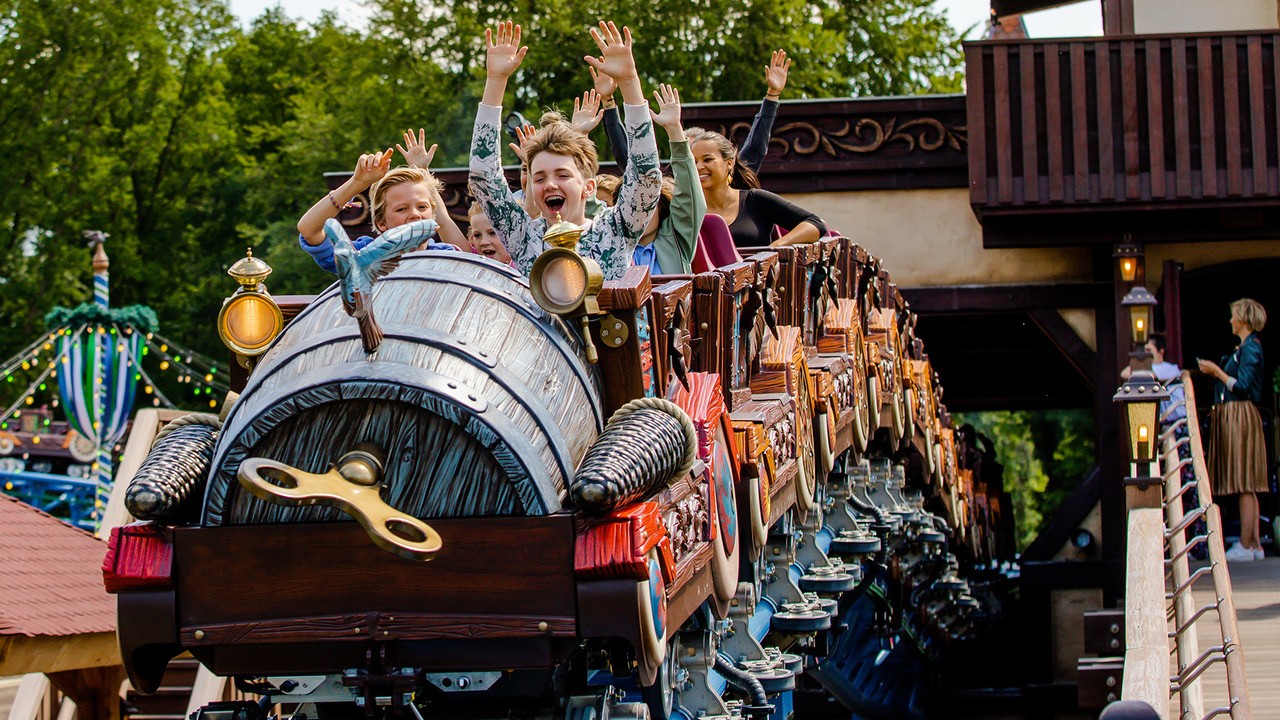 Efteling – the fairytale theme park in the south of Holland – has opened its new attraction Max & Moritz to the public.  The ride is geared towards children aged between 4 and 10 years old, from 1 meter in height, but is also suitable for the whole family. This so called ‘powered’ coaster adds another adventure to Efteling’s varied attraction offering.

Efteling’s CEO Fons Jurgens says: “After saying goodbye to the iconic Bobsleigh ride last year, young visitors to Max & Moritz will be able to share their first roller coaster experience with the whole family from tomorrow. It is a very contemporary and real Efteling ride, based on the German poem about the rascals Max and Moritz. During the ride and in the surrounding area, visitors will find out about Max and Moritz’ tricks and mischief”.

The whole area has been redesigned and themed in less than a year. From Saturday, the new catering establishment at the Max & Moritz Square ‘Frau Boltes Küche’ will also open, serving French fries, snacks and chicken bites.

Max & Moritz is a double roller coaster with two tracks on which two trains ride in opposite directions and meet each other a couple of times. This powered coaster is a new type of ride for Efteling. The trains are electrically powered, so the speed can vary and gravity does not play a role. Visitors get to choose which track to ride: Max (blue) or Moritz (green). Each track has its own exciting experience with sharp curves and accelerations.

The new roller coaster is themed on the well-known German poem by Wilhelm Busch from 1865, Max und Moritz, about two naughty schoolboys of the same name. In Efteling, they live in a cute village with their mother Frau Schmetterling, who makes special cuckoo clocks. Her sons drive the villagers to despair with their tricks. When Frau Schmetterling locks up Max and Moritz for punishment in her cuckoo clock workshop, they try to escape with self-built soap boxes. Efteling visitors join them on the escape.

Joe Kleimanhttp://wwww.themedreality.com
Raised in San Diego on theme parks, zoos, and IMAX films, InPark's Senior Correspondent Joe Kleiman would expand his childhood loves into two decades as a projectionist and theater director within the giant screen industry. In addition to his work in commercial and museum operations, Joe has volunteered his time to animal husbandry at leading facilities in California and Texas and has played a leading management role for a number of performing arts companies. Joe previously served as News Editor and has remained a contributing author to InPark Magazine since 2011. HIs writing has also appeared in Sound & Communications, LF Examiner, Jim Hill Media, The Planetarian, Behind the Thrills, and MiceChat His blog, ThemedReality.com takes an unconventional look at the attractions industry. Follow on twitter @ThemesRenewed Joe lives in Sacramento, California with his wife, dog, and a ghost.
Share
Facebook
Twitter
Linkedin
Email
Print
WhatsApp
Pinterest
ReddIt
Tumblr
Previous articleAmerican Resort Management selected to represent Atlantic City’s Showboat hotel in development of new waterpark
Next articleJuggling college and internships in the themed entertainment industry