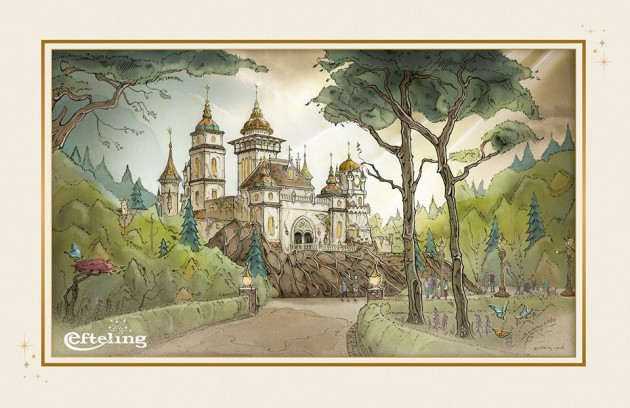 Kaatsheuvel, The Netherlands — The Dutch theme park Efteling, located in the southern Netherlands, will open its new attraction ‘Symbolica: Palace of Fantasy’ in summer 2017.  Symbolica will be a ‘dark ride’, an indoor  attraction for the whole family, and similar to other Efteling attractions such as ‘Droomvlucht’, Fata Morgana and Carnaval Festival. The new attraction will revolve around the interplay of reality, dream and fantasy. Symbolica will form part of Efteling’s 65-year anniversary celebrations and is planned for the centre of the park.

Symbolica is being constructed in the centre of the park next to ‘Polles Keuken’ pancake restaurant. The attraction’s construction will cost approximately €35 million. Fons Jurgens, President and CEO at Efteling, explains: “Symbolica will be the largest and most expensive Efteling attraction ever. By constructing Symbolica, we are renewing and expanding our range of attractions en route to becoming an international destination with 5 million visits per year. Symbolica will be an attraction for the whole family. Because visitors of all nationalities and generations use their imagination. This dark ride will help Efteling to maintain its distinctive edge and its position at the top of the list of European theme parks, not only through unique and characteristic storytelling and thematisation, but also through our close attention to detail in every aspect of the attraction. Every ride will guarantee wonder and amazement and excite the imagination in a new and different way.” 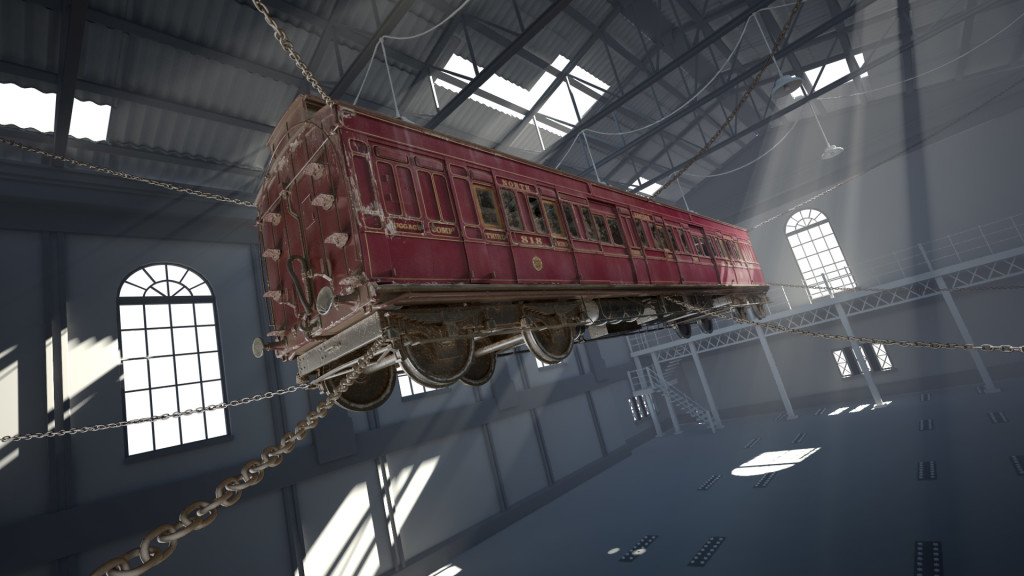 Chertsey, UK (January 18, 2016) — Derren Brown today announces that the top secret attraction he has been working on with THORPE PARK Resort is a Ghost Train re-invented for the 21st Century. First visuals released today reveal a seven ton Victorian Carriage suspended in mid-air.

Derren Brown’s Ghost Train, which can only be found at THORPE PARK Resort, is a head-spinning train journey of between 10-15 minutes, the like of which guests will never have taken before; providing a heady mixture of exhilarating live action sequences, 4D special effects, grand-scale illusions, next generation technology, and physical transit.  No place for spectators, guests will play a major part in the action which will leave them questioning where perception ends and reality begins.

THORPE PARK Resort’s biggest and most ambitious investment to date, Derren Brown’s Ghost Train takes theme park attractions to a whole new level, promising to derail guests’ minds with a series of multi-sensory experiences. Like its inventor, this is a  smart ride that also has 12 multiple knee-shaking journeys and two endings – so not only will no two ‘rides’ on board Derren Brown’s Ghost Train be the same but every journey will provoke an intense response and reaction in each individual ‘passenger.’ So whilst guests may share the journey with others, the experience will be an individual one – and every journey, every sensation and every fear will be quite unique.

Derren Brown comments: “I am proud and excited to have been working with the creative and operational teams at THORPE PARK Resort and Merlin Magic Making to completely reinvent the concept of a Ghost Train for the 21st Century.

“Visitors can look forward to experiencing a heady and heart stopping combination of next generation technology, grand illusion, special effects and live action that will completely rewrite the rules of what a theme park attraction can deliver.

“The team has been galvanized by the positive reaction to the first announcement we made last year and we are even more determined to deliver a revolutionary experience; as such we are constantly tweaking things to ensure they’re the best they can be.

“I firmly believe that this kind of multi-sensory, mind blowing attraction represents a glimpse of what the future holds for theme parks the world over.

“Akin to my shows, I ask that when you board the train, the secrets remain mine and yours to share and fear, and you don’t spoil the experience by telling others ahead of their visit.

“People should also note that this is not an experience for the faint hearted.  But to ensure you are in the right frame of mind to take full advantage of the journey I will send you on, I refuse to reveal any further details past the doors of the carriage.”

Derren Brown’s Ghost Train will be housed within an extraordinary purpose built warehouse that encompasses 2306 square meters and is tall enough to house nearly three double decker buses.  The centerpiece of the attraction will consist of a 20 meter long, four and a half meter high, seven tonne Victorian train carriage that is suspended in mid air over three meters above ground by iron chains. A carriage which passengers enter via a metal bridge, and where the mind-bending journey begins in earnest in what appears to be a large disused Victorian warehouse.

Guests will be subject to a variety of multi-sensory surprises throughout the journey including a series of high-octane live action sequences where participants will take center stage in the story. And like his TV shows and stage performances, Brown will toy with guests’ minds and perceptions throughout the journey on board the Ghost Train until they no longer know what is real, before leaving them on a cliffhanger ending.

The team involved in the creation of the attraction includes over 1,000 specialists from THORPE PARK Resort’s Merlin Magic Making Creative Department and external experts who have pooled their skills.

Mike Vallis, Divisional Director of THORPE PARK Resort commented: “We’re pleased to be able to share more details after such a positive reaction to the news we’d partnered with Derren. The team are working round the clock to deliver an incredible experience for our guests in what promises to be the first of its kind in the world, and certainly the most exciting and ambitious project we have ever attempted here at Thorpe Park.

“I can’t say any more about the secrets that lurk behind the train doors at this stage, or indeed ever, but what I can say is that previous attractions both at THORPE PARK Resort, and globally, pale in comparison to Derren Brown’s Ghost Train – it’s a full assault on the senses which will melt minds.

“This is a scary new dimension THORPE PARK Resort is entering – different from any other development we have seen anywhere else in the world.  It is bold, daring and takes theme park attractions to a new level. This is thrilling fun as you’ve never seen or experienced it before.

“Don’t take the first visuals at face value, as they are deceptive and all is not quite what it seems.”

The Creative team led by Merlin Entertainments’ Group Creative Director Paul Moreton and Creative for THORPE PARK Resort Bradley Wynne at Merlin Magic Making, summed up the experience: “For centuries Ghost Trains have played on riders’ fears to create memorable experiences which shock and delight and thus ultimately make you scream and laugh together.

“At Merlin Magic Making we are constantly striving to push the boundaries of innovation; we don’t just want to be specialists in creating entertainment, but also inventors. This concept is an entirely new invention. You can’t simply call it a ride, an attraction or an experience – this is an original concept and we can’t wait to see people’s reactions to it.

“Working with Derren we decided to use the classic Ghost Train of yesteryear as inspiration and what we have done, is completely reimagine the experience for the world we live in today.

“Utilizing a mix of techniques spanning from the Victorian era through to today’s next generation technology, we have challenged the norms of existing entertainment experiences to create something utterly original which can never be replicated.”

“This is a thought provoking, original experience that will play with your senses and mess with your mind. It’s brimming with surprise and of course, staying true to the Ghost Train, it will be unnerving, it will be scary, it will be fun and it will awaken your every sense.”

For the latest updates on the new attraction and to be in with a chance to be the first to ride the new experience, visit mindswanted.co.uk. Age restrictions will be in place for the new ride, but are yet to be announced.

Joe Kleimanhttp://wwww.themedreality.com
Raised in San Diego on theme parks, zoos, and IMAX films, Joe Kleiman would expand his childhood loves into two decades as a projectionist and theater director within the giant screen industry. In addition to his work in commercial and museum operations, Joe has volunteered his time to animal husbandry at leading facilities in California and Texas and has played a leading management role for a number of performing arts companies. Joe has been News Editor and contributing author to InPark Magazine since 2011. HIs writing has also appeared in Sound & Communications, LF Examiner, Jim Hill Media, and MiceChat. His blog, ThemedReality.com takes an unconventional look at the attractions industry. Follow on twitter @ThemesRenewed Joe lives in Sacramento, California with his fiancé, two dogs, and a ghost.
Share
Facebook
Twitter
Linkedin
Email
Print
WhatsApp
Pinterest
ReddIt
Tumblr
Previous articleBob Weis Appointed New President of Walt Disney Imagineering
Next articleGeorgia’s Avatron Technology-Based Theme Park To Open Jan 2019 With Lionsgate Licensed Properties